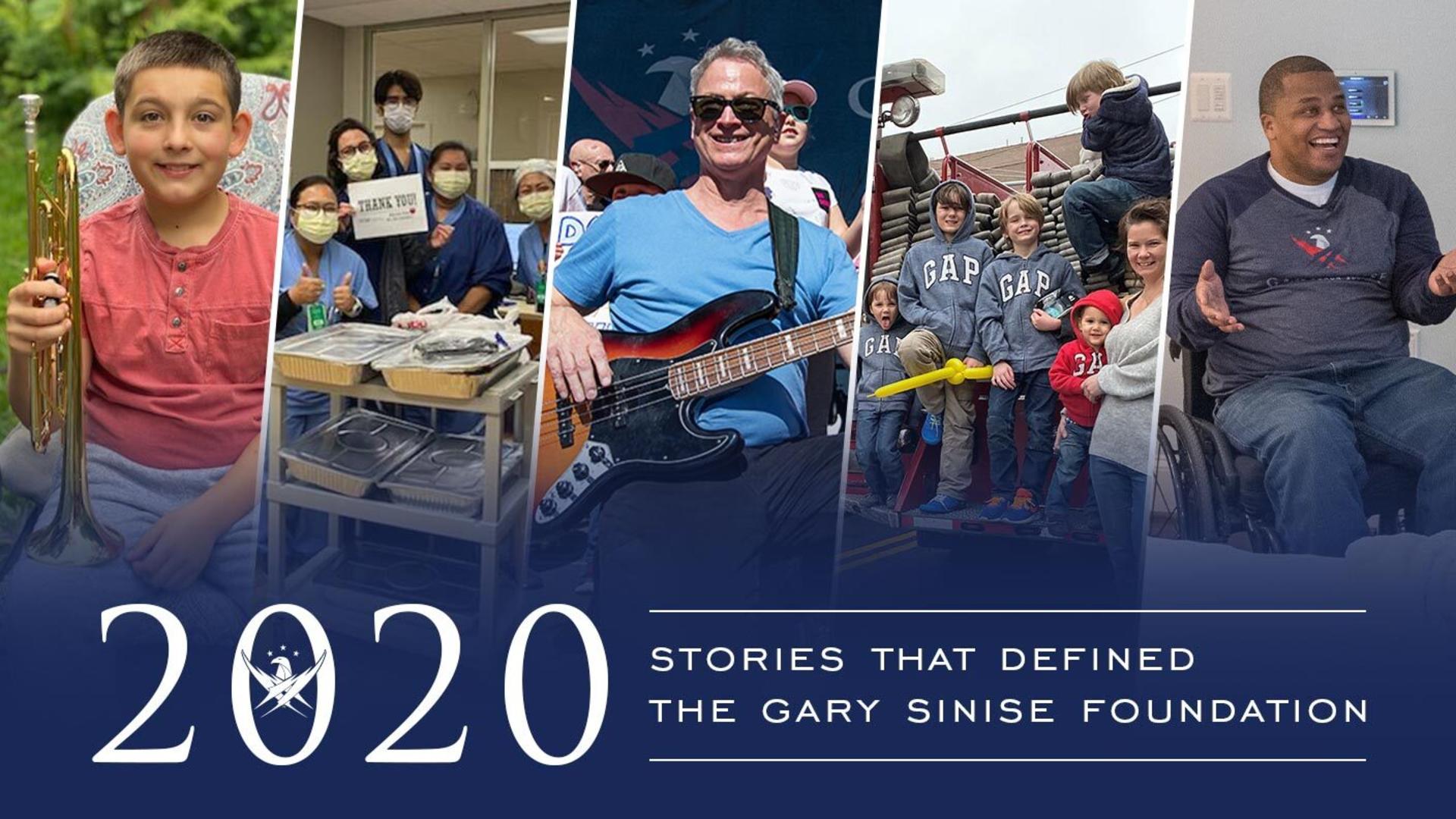 With 2020 drawing to a close, the unprecedented year challenged the Gary Sinise Foundation to a degree unlike any other in its operating history. For as many unforeseen twists and turns and crises, the foundation answered with sweeping responses and creative answers.

As the novel coronavirus tore across the country in mid-March, the foundation temporarily shut its office with staff working remotely. Stress and anxiety were high. Yet, the rapid rate of change and reshuffling of priorities didn’t lull the engine of service. The focus on achieving the mission didn’t fade. The engine, instead, roared, and focus intensified.

​In the spring and summer, when the economy nosedived and unemployment claims soared, financial assistance dispersed with immediacy, reaching veterans, Gold Star spouses, and many others in need. At the same time, the demand for protective equipment like N95 face masks, face shields, and gloves upended the supply chain, causing manufacturing and delivery delays. Grants dispersed through the First Responders Outreach program became a lifeline for volunteer first responder departments to purchase protective equipment.​

Today, requests for help continue to come in, with financial assistance and grant funding continuing to go out.

The economic shockwaves from COVID-19 didn’t stop Americans from stepping up with overwhelming enthusiasm and charity when we asked for help or donations. In Montgomery County, Texas, a cyclist pedaled more than 200 miles in April, raising thousands of dollars for first responders and medical workers; nearly 3,000 hand-made face masks created by supporters of the foundation and delivered to our office were shipped in June to nurses, first responders, veterans, service members, and their families around the U.S.

And on December 1, Giving Tuesday, fundraising records were broken when over $900,000 was raised.

Not every event took place this year. Lt. Dan Band concerts were canceled. Soaring Valor trips to the National WWII Museum in New Orleans were postponed until 2021. And Snowball Express, normally a five-day trip to Walt Disney World, was instead held virtually and over one weekend this month.

​Through some of the darkest moments of the year: racial injustice protests erupting in cities and communities across the U.S., COVID-19 spreading indiscriminately and taking the lives of over 319,000 people, and the deaths of Austin Gibson months after the retired Marine received a specially adapted vehicle, and Pearl Harbor survivor and Soaring Valor participant, Lester "Les" Lindow who was 98, there was light.

The Central Florida Chapter debuted in Orlando, bringing a concentration of resources and outreach efforts to the region’s noted population of veterans with aid also going to first responders and their families. Snowball Express children visited zoos and aquariums virtually from the safety and comfort of their homes.

And in just four months, the Emergency COVID-19 Combat Service campaign delivered a whopping 60,795 meals to hospitals, Veterans Affairs medical centers, and military bases in the U.S. and overseas. The campaign also provided over $480,000 in grants to fire and police departments in 27 states.

For a historic year with much to define it, the Gary Sinise Foundation presents its defining stories of 2020.

​In January, Army veteran Jeremy Haynes and his family moved into their R.I.S.E. specially adapted smart home in Fairfax County, Virginia. The mortgage-free home is specifically designed to fit Jeremy’s mobility needs. In little time he is regaining his independence performing everyday tasks like bathing, washing the laundry, and cooking, without another’s assistance. But just as important, Jeremy has become a constant presence, and a more active father, with his kids.

​A month before COVID-19 upended the foundation’s events calendar, in February, the eighth Invincible Spirit Festival took place under cloudless skies and sunshine at Naval Medical Center San Diego. Recovering service members, veterans, medical staff, and family members enjoyed a performance by Gary Sinise and the Lt. Dan Band, dined on burgers, chicken, and hot dogs, and got up close to hot rods, sports cars, and more at the classic car show.​

In March, widows of deceased service members and first responders spent three days in Los Angeles, healing and embracing community support. The retreat was organized by Never Alone-Widows of Heroes with funding from a grant from the Gary Sinise Foundation as part of its mental health services. “The focus of the retreats is to give them hope, healing, and some tools on how to cope with loss in a healthy way,” explained Ginger Gilbert Ravella, an ambassador of the foundation and one of the retreat organizers.

ER nurses in San Diego and New York City. A Los Angeles restaurateur. A USO director. How the Foundation touched their lives in 2020 during COVID-19

Across the U.S. and several overseas military installations, in a four-month span, 60,795 meals funded by the Emergency COVID-19 Combat Service campaign nourished health care workers on the front lines of the COVID-19 pandemic, service members, veterans, and their families. As one ER nurse in New York City put it, “You feel loved. You feel appreciated.”

Children and teenagers in Gary Sinise Foundation Snowball Express honed their musical talents this summer (and continue to do so) with help from professional musicians, including several members from Gary Sinise and the Lt. Dan Band. Individual lessons were conducted virtual, unearthing newfound talent for some, and providing much-needed practice for others.

Renee Villarreal is a force of nature. A single mother currently serving in the Connecticut Army National Guard, she works two jobs to make ends meet while also completing a degree and taking the next step in fulfilling her aspirations for becoming a special education teacher. COVID-19 upended her plans and left her jobless. The foundation stepped in by paying two months of her rent through its Emergency COVID-19 Combat Service campaign.

Since July, more than 50 Snowball Express surviving spouses have undergone an 8-week financial seminar organized by the Gary Sinise Foundation and hosted virtually by CSP Financial Group. The crash course on money management is already making a difference. “By the end of eight weeks, they understand how money flows through their life,” said Charles Pettit, who leads the seminar alongside his colleague, James Anderson. Seminars will continue in 2021.

COVID-19 struck New York City in the spring with gale-force speed, necessitating Friends of Firefighters, a Brooklyn-based nonprofit formed in the aftermath of 9/11, tapped its three-year grant from the Gary Sinise Foundation to address an uptick of mental health needs by New York City firefighters and retirees. By offering free counseling and wellness services, said Nancy Carbone, founder and executive director, “We’re providing the first responders with a sanctuary, and we are providing licensed counselors that understand the culture.”

Mental health has been a priority of the Gary Sinise Foundation since its founding with partnerships treating traumatic brain injuries (TBI), post-traumatic stress disorder (PTSD), and substance abuse of veterans and first responders. For Navy veteran Zakri Zoeller, a wound he received in Iraq led to substance abuse, raging anger, and suicidal thoughts. He grappled with PTSD. This summer, after undergoing six weeks of rehabilitation at Warriors Heart, with two additional weeks paid for by the foundation, he got his life back on track.