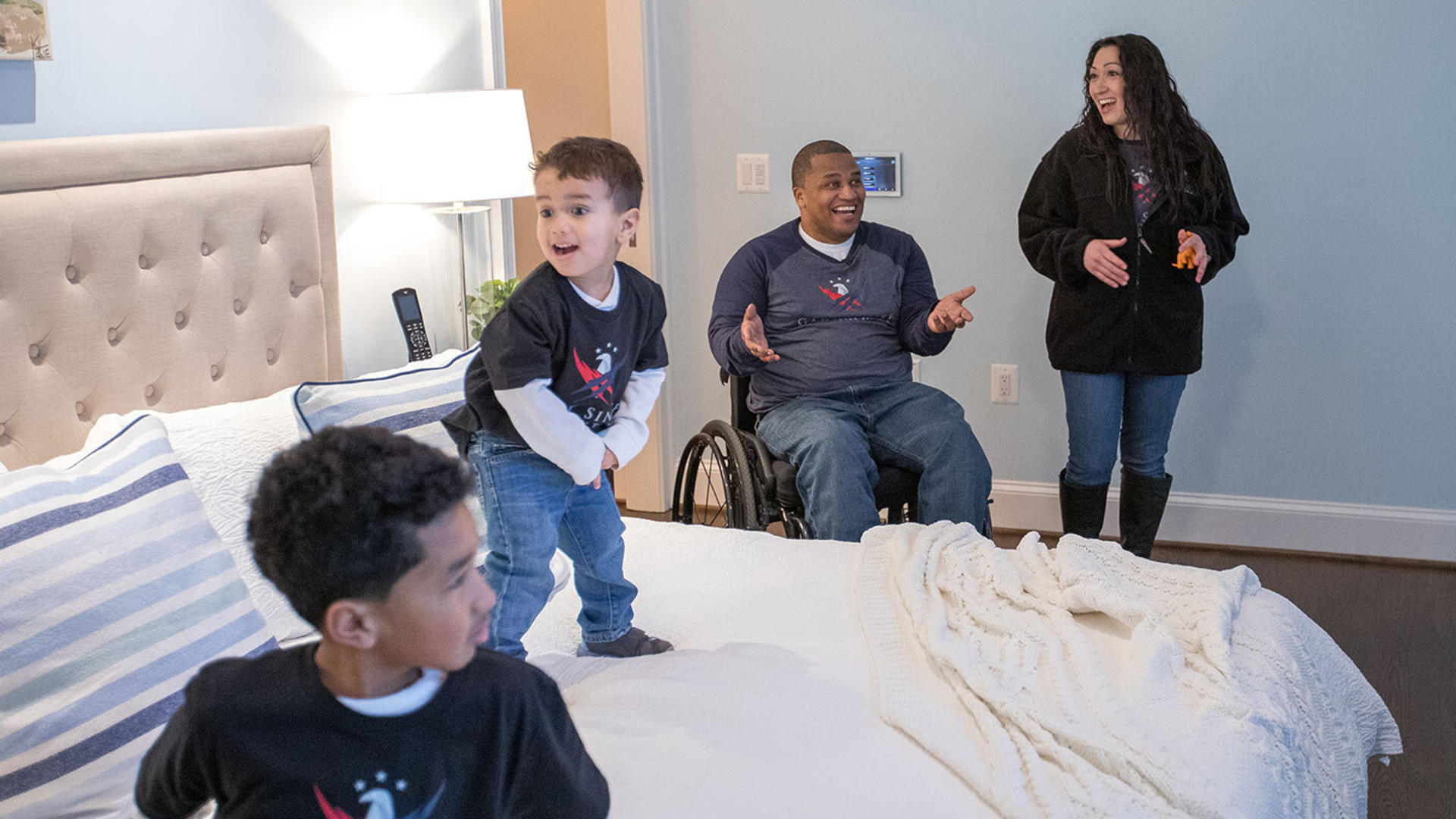 Jeremy Haynes felt ​the miles adding up and steadily chipping away at his resolve. At the worst of times, he felt like a burden on his wife, unable to assist her and their kids. Chores around the house that were once routine and effortless now requires help. He felt demoralized.

In the years following a career-ending injury in Afghanistan that left the Army veteran paralyzed from the waist down and a traumatic brain injury that affects his memory, Haynes and his family accustomed themselves to the limitations of accessible housing.

In 2019 while still living at Fort Belvoir in Virginia, Haynes and his wife, Chelsea, made a wish list of the key features and modifications they needed most in their specially adapted smart home, which came courtesy of the Gary Sinise Foundation R.I.S.E. (Restoring Independence Supporting Empowerment) program.

Their requests were modest: a wheelchair-accessible bathroom, maneuverability between rooms, and easy entry into and out of the home.

"I’ve been running a marathon, and I’m just now crossing the finish line,” said Haynes, who earlier this year moved into the custom-made home nestled on more than six forested acres in Fairfax, Virginia.

Haynes will be the first to say that he is not an emotional person. But he couldn’t help feeling overjoyed as he wheeled himself under the archway and through the front doors to the home for the first time.

Crossing the metaphoric finish line of living in a wheelchair-accessible home, Haynes said, "I can begin to rebuild with my family.” Today, he is no longer a father on the outside looking in.

As he took stock of the features in the home, he imagined the boundaries that had once separated him from his children fall before his eyes. For too long, he said, "They saw dad in two places: in the bed or the living room of our previous home.”

"The extra inches,” as Haynes describes the wide doors integrated throughout the R.I.S.E. home, “allow me to interact with my kids in their own space.” He said he can now be at their bedside and pray with them before they fall asleep. And he can read a bedtime story to his three-year-old and five-year-old in the comfort of their room.

For a long time, Haynes relied on Chelsea, a drill sergeant in the Army Reserve, to position him into the bathtub to bathe. ​"Mentally and spiritually, I felt demoralized and hopeless. My soul was just tattered.” Each instance when he needed her help, in one way or another, he said he felt that he was "slowly breaking her body.”

Haynes now uses handrails and other adaptive features inside the bathroom to care for himself. "To see him doing more things independently around the home and with the kids,” said Chelsea, “has been a phenomenal moment among so many moments.”

On a deeper level, Haynes described the mental and emotional impact the home provides to recovering veterans like himself in "being able to independently achieve things that many said I'll never be able to do alone.” 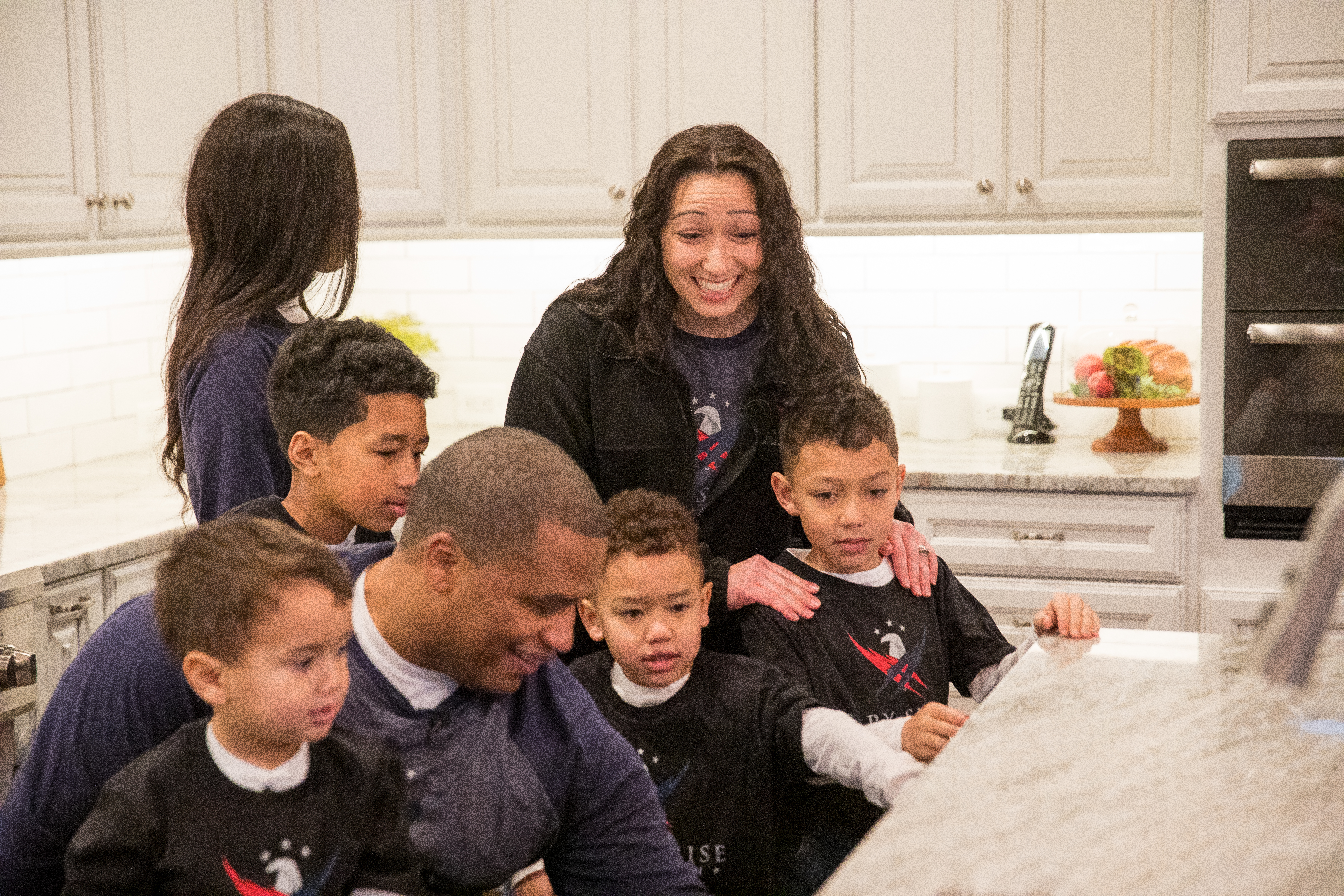 From the very beginning of the home building process in 2017, each iteration of the floor plan, and design, incorporated Haynes’ needs. No detail was spared, not even his torso, which was measured to ensure the kitchen table's height was not too high or too low — that it was just right for him to interact with his family.

Said Haynes about working with the R.I.S.E. team and contractors, "They made sure that everything was tailored around me and tailored in a way that gave me the opportunity to not only independently achieve the things that I could never really do again but also, forging a greater bond with my family.”

What was once inevitable entering a room or leaving the house — his wheelchair clipping the edge of the doorway and jerking him backward — is now a thing of the past.

With so much technology incorporated into the home, he and Chelsea had their struggles adjusting to the learning curve in mastering the functionality of the iPad. "My brain was equipped to like an ‘84 Chevy," Haynes said, "walking into our home, it’s like a Ferrari."

The seemingly limitless control of the home they have in the palm of their hand has equated to an about-face in Haynes’ stamina. Instead of spending his energy rolling from one end of the home to the other — turning off a light here or switching off the television there — he can effortlessly drag or tap his fingertips using a central app on his iPad to do exactly that.

More than six years have passed since August 5, 2014, when an Afghan military policeman opened fire at a training facility in Kabul, Afghanistan striking Haynes four times and in an instant, upending his and his family’s lives. For as many months as he has spent inside and outside of his home, Haynes describes how it "continues to empower me to take back what was lost, but it also energizes me to redefine binary things I was often told I would never be able to independently achieve.”

Living in the old home, said Haynes, was like a pitched battle: the home's physical limitations, rife with impediments in its design and floor plan, inhibiting his personal growth and relationship with the kids. But since January 30, he said, he is finally at peace and ready for the next marathon and the miles to come.

"This home is an instant impact that continues to be a game, and life-changer, for our family.”