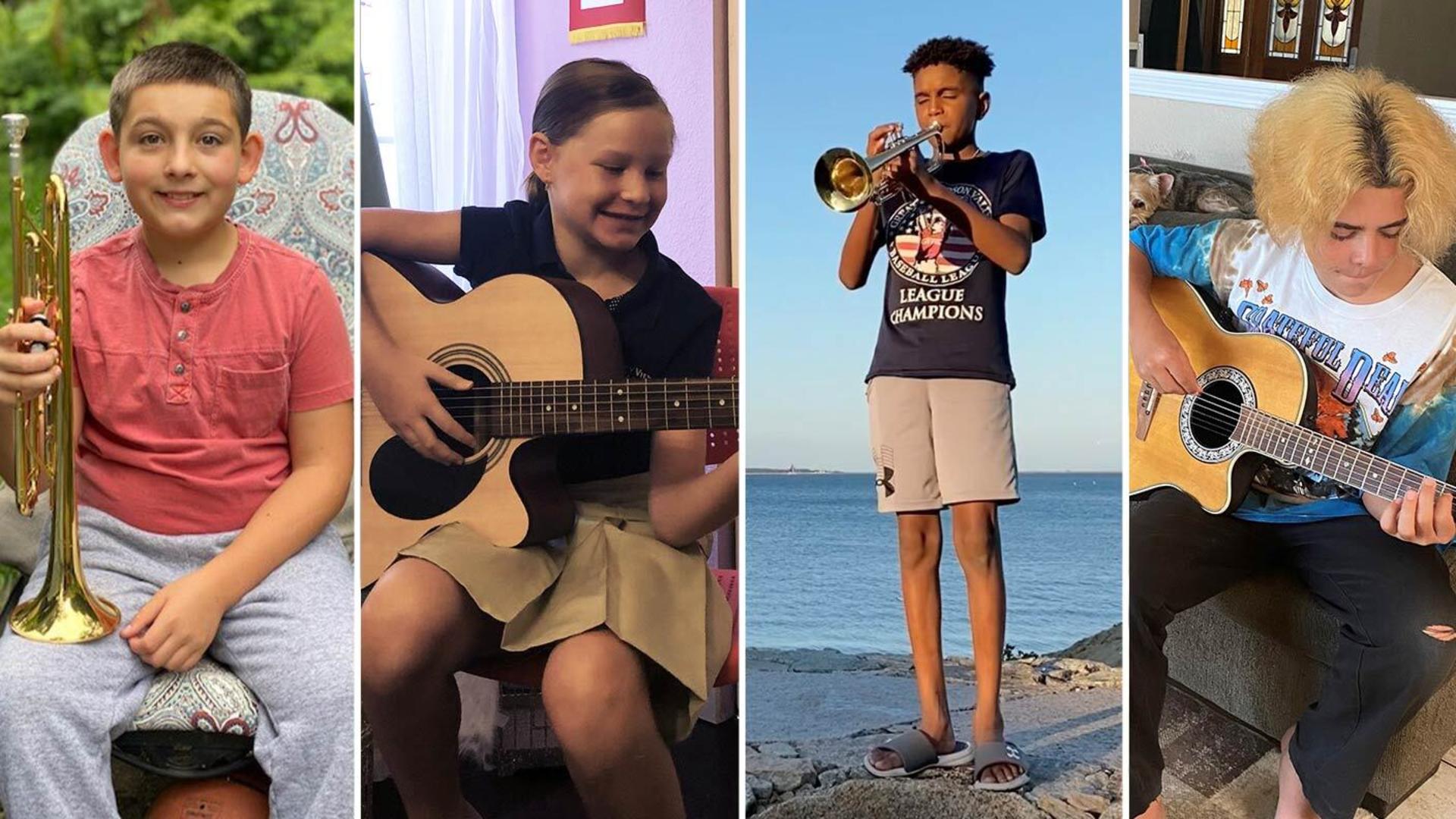 From coast to coast, by Zoom and by Skype, 52 children and teenagers in Gary Sinise Foundation Snowball Express have been honing their musical chops this summer with help from professionally-trained musicians, including several members from Gary Sinise and the Lt. Dan Band.

​Lessons began at the tail end of July, consisting of individualized instruction on one of several instruments: the guitar, piano, violin, drums and percussion, ukulele, bass, saxophone, trumpet, and trombone. Vocal lessons, too, were offered.​ ​​

Finding enough instructors to virtually teach lessons once a week to students living across multiple timezones wasn’t too difficult, explained ​James Stuckmann who tapped into his network of musicians, including the Lt. Dan Band.

Stuckmann has been with the band since 2004. He worked with the foundation’s events and Snowball Express teams in organizing the six-week-long program.

For Vlada Golin, participating in the music program uncovered a natural affinity for playing the guitar. She was six years old when her father, Mihail, a Green Beret, was killed in Afghanistan in 2018.

"She’s so focused and so determined on doing it and doing it well,” explained her teacher, Gina Gonzalez, "I told her, ‘If you really stick with it, I think that you could have a nice, long career playing the guitar.’”

Gonzalez instructed seven others in either the guitar or vocals. She’s been singing with the Lt. Dan Band since 2004, and like her fellow band members, has for years taught her craft to students. 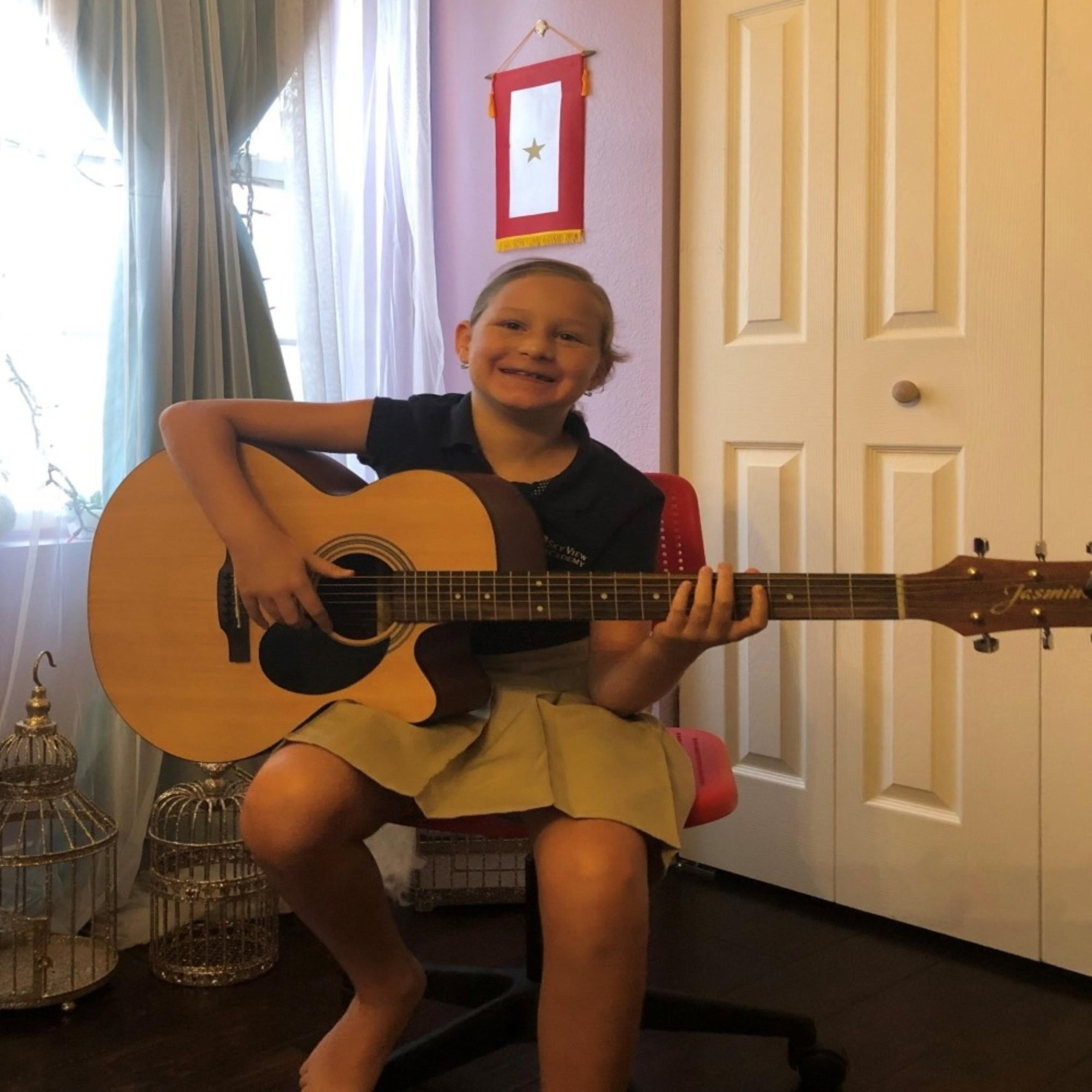 Despite never having touched a guitar in her life, Gonzalez said with amazement, the fourth grader's potential was evident from the start.

During one Wednesday evening session in late August, Vlada was learning how to strum several chords together. The C chord was giving her trouble, and her fingers were hurting. "This is a marathon, not a sprint,” Gonzalez reassured her at one point during the lesson.

Vlada was flustered, yet kept playing.

As she began strumming four chords, one after another, at a modest tempo — working out the kinks in her hand movements along the neck of the guitar — Vlada reached harmony.

"I get used to it, and I get the hang of it,” Vlada said about overcoming tricky chords. She eventually wants to attend the School of Rock and start a rock band.

The continued transmission of the novel coronavirus has forced K-12 schools nationwide to begin the school year online, with some using a variation of a hybrid model, with students coming into the classroom on certain days of the week, others remaining online. In many cases, the economic effects of COVID-19 have led administrators to cut costs to stay afloat at the expense of arts and music education.

For Michael Hansen, a sixth grader in New York who plays the trumpet, choosing online instruction instead of the hybrid option offered by his school meant not having access to band practice. He hasn’t rehearsed with the school music ensemble since March because of COVID-19.

In 2009, Michael’s father, Dennis Hansen, an Army Staff Sergeant, succumbed to wounds from an IED explosion during a deployment to Afghanistan. He was too young to form any memory of him.

Days before his first lesson, Michael grew anxious with thoughts of his instructor being a curmudgeon-type who would be overly critical of his playing ability. He worried that the instructor would assign a boatload of homework impossible to master between lessons.

But when he answered the Skype call from Kirk Garrison, a distinguished jazz musician and composer — with a gregarious demeanor and slick sense of humor — their personalities instantly clicked.

"When you teach these young people you want to get that bond,” Garrison explained about the friendly rapport he builds with his students. A veteran himself, he spent nine years playing in the United States Air Force Band, and since 2005 has been touring with the Lt. Dan Band.

Garrison pointed out that distance learning (​with private instruction) is just as advantageous as in-person lessons are for his students reaching their goals, like reading music and properly playing the rhythms​.​​

"They’re on their own now, and this teaches them to do that and get the answers for themselves by actually reading the music and imagining the sounds and then making the sounds without having someone else spoon feed it to you or teach you by ear.”

"He doesn’t care if I mess up,” Michael explained about Garrison’s teaching style. "He encourages me not to get mad if I make a mistake.”

Like Michael, Connor Brice, too, found it challenging to improve himself in band practice without one on one instruction. "Now that I’m with a teacher by myself, I feel like I’m learning a lot more and getting better,” said Connor, who comes from a family of trumpet players.

For some students, the weekly music lessons became a way back to an interest that had previously flamed out.

James House was months old in January 2005 when his father, John Daniel House, a corpsman in the Navy, was killed in a helicopter crash in Iraq.

A sophomore in high school, he started playing the guitar two years ago. Once a week, his grandfather would instruct him on the basics of the instrument. He learned a few chords but never felt inspired to stick with it.

Among his prized possessions of his late father are the homemade videos of John playing impromptu concerts for his siblings and parents with the same guitar he now uses in his sessions with Gina Gonzalez.

"I don’t have quite a lot of things that I can look at and say, ‘this was something that he loved and held and played as well,’” James said of the guitar’s significance. "It’s a really special experience having that guitar that was his and knowing that he played just the same as I am now.”

With his grandfather’s birthday just weeks away, he has a surprise in store for him that honor’s his father and the connection they all share playing the guitar. James is nearing mastery of Creedence Clearwater Revival’s "Bad Moon Rising,” the song his grandfather tried teaching him years ago.

"Him seeing me play,” James said of his grandfather, "will really mean something to him.”