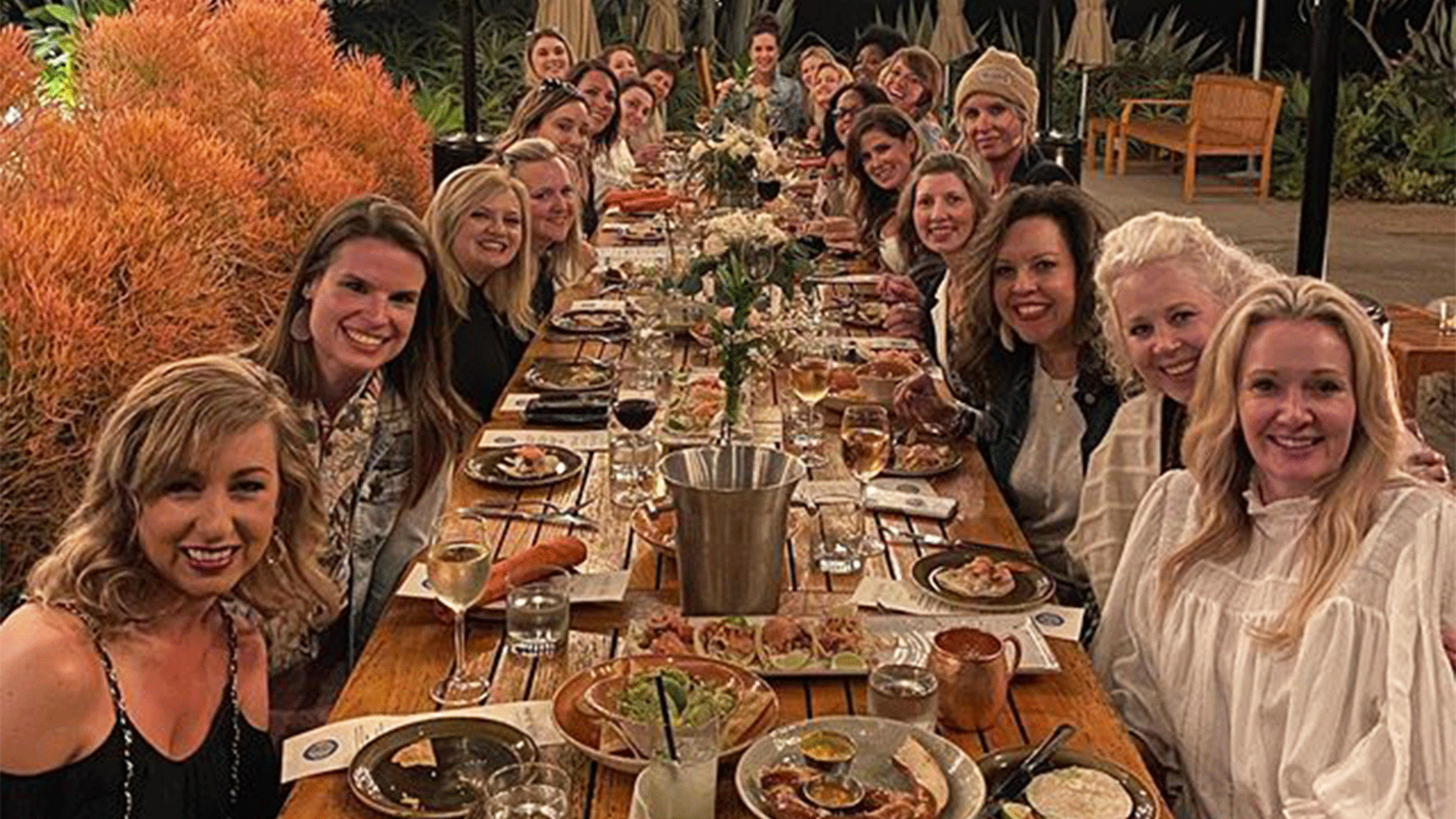 On Thursday, March 5, a group of surviving spouses of deceased first responders and military service members culminated the end of a three-day retreat by visiting the headquarters of the Gary Sinise Foundation.

The retreat, organized and led by Never Alone Retreats-Widows of Heroes, a 501(c)3 that supports spouses of deceased service members and first responders through retreats focused on healing and community support, was made possible through a grant from the Foundation.

“The focus of the retreats is to give them hope, healing, and some tools on how to cope with loss in a healthy way,” said Ginger Gilbert Ravella, an ambassador of the Gary Sinise Foundation and one of the retreat organizers.

Ravella lost her college sweetheart, Troy Gilbert, a Major in the U.S. Air Force, in 2007.

During a combat mission in Iraq, Gilbert was killed in action when his aircraft crashed into the ground after having responded to the need for close air support by American troops under fire from enemy insurgents.

Working in conjunction with Rachel Faulker Brown, the two banded together over their shared loss of losing a husband in military service by orchestrating tailored retreats for those facing similar circumstances as they had gone through.

As part of the Foundation’s mental health initiative in its Relief and Resiliency programming, Widows of Heroes complements a growing list of services to address the mental health needs of service members, first responders, veterans, and their families. For the 14 women who participated in the retreat, they traveled to Los Angeles from across the country at no expense, including their stay in Palos Verdes which overlooks the Pacific Ocean.

What makes Widows of Heroes retreats unique, said Ravella, is the makeup of attendees who have each lost their husband in the last five years.

Their stories of loss run the gamut.

But for others, the traumatic experiences their husbands were routinely exposed to ended up taking a deadly toll.

“We have a third of our widows at this retreat whose husbands committed suicide due to PTSD,” said Ravella.

A leading cause of death among first responders, suicide remains an alarming reality. Within the armed forces and veterans community, suicide is an epidemic of even greater proportion.

“We really want them to feel seen, known, and loved,” explained Ravella.

With so many widows having lost their husbands to suicide, the effects of PTSD and mental health were a shared experience many could relate to.

“And he was seeing the very worst of the worst.”

Parrish lost her husband on December 31, 2017. He was ambushed and shot multiple times while attempting to assist a mentally ill man.

Deputy Parrish was 29 years old when he was killed in the line of duty. He and Gracie had been married for nearly nine years with whom they had two little girls.

“I woke up on New Year’s Eve morning to pounding on my door with the Sheriffs’ informing me that my husband had been killed.”

“There are so many stressors that you just don’t talk about,” she explained about being a first responder family.

The stress and traumatic experiences first responders are routinely exposed is just the tip of the iceberg of what isn’t being talked about. So too, Parrish said, of the increasing divorce rate in the first responder community.

Months after Zach’s death, she participated in a Never Alone retreat. She was so inspired by the experience that she started a foundation to support first responders and their families with a focus on curtailing the divorce rate and bringing greater awareness to mental health and the suicide epidemic.

Coping with feelings of anger and guilt and regret were collectively shared and discussed throughout the retreat. For many, they found solace and encouragement in the words of their peers and from the leaders of the retreat.

“What is life going to look like for me moving forward?” asked Parrish as she addressed the women. “I know you feel this way right now, and that’s where I was, but I want to encourage you that you can have the most beautiful and fulfilling and abundant life.”

The approach to healing and coping with the pain is different for everyone, she said. But with the tools and community support born out of Widows of Heroes, women are equipped with the right foundation to move forward in their lives.

As Ginger Ravella and organizers of Widows of Heroes look towards the future, the backing of the Gary Sinise Foundation adds a seal of trust and confidence in the viability of the retreats.

Said Ravella, “They’re entrusting us to be good stewards of their hearts because it’s a long and lonely road, and you don’t know which way to turn.”

On the road to recovery and healing, widows of fallen heroes are never alone.