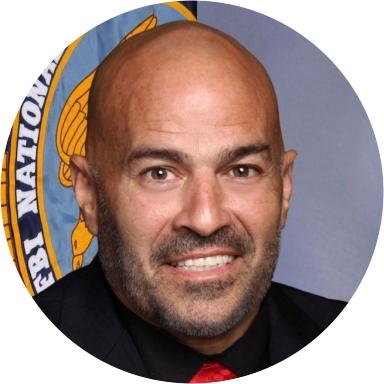 Eric Diaz started as a Police officer with the Tampa Police Department on February 05, 1985. As a son raised by his single mother, the environment of the Police academy uncovered a plethora of male role models. Some of the role models were good, others were not. Eric was fortunate to find a mentor who was very focused on the core values of what made being a great police officer and an even better human being. Eric believes the examples we set as mentors are critical to the growth of leaders amongst successful organizations.

Sergeant Diaz became an Instructor for the Tampa Police Department in 1986 after only 1 year on the job. This was uncommon as the minimal time for instructor selection was a minimum of 2 years. His early selection was based on his martial arts background and his enthusiasm for volunteering to be a role player for department training. This voluntary commitment demonstrated his dedication to training and the commitment to better each individual officer attending.

Eric became the Master Instructor for the Tampa Police Department’s Defensive Tactics program and was selected as a subject matter expert by the Criminal Justice Standards and Training Commission. As a subject matter expert he was assigned to the State of Florida Task Force to revise the Defensive Tactics curriculum for the State of Florida. During this time, he became a member of the Tampa Police Department’s S.W.A.T. team and eventually assumed the role as Team Commander. During his tenure with S.W.A.T.  Eric was the primary trainer and designer of the team’s Defensive Tactics, Use of Force, and De-escalation tactics.

As a Trainer and Instructor, Eric has been a part of the cadre of Hillsborough Community College, Pasco State College and St. Petersburg College instructing new cadets and advanced officer in Defensive Tactics, Firearms, chemical agents, Communication and Leadership. Eric has assumed the role of mentor to provide additional and ongoing guidance for cadets, officers and supervisors. Eric has additionally represented the Tampa Police Department by instructing in Costa Rica and Haiti.

In 2016 Eric retired from the Tampa Police Department after 30 years of service and joined the Tampa International Airport Police Department. In short order he was promoted to Sergeant and was placed over the department’s Training and Tactical unit. In 2019 he was selected to attend the F.B.I National Academy Session #278, less than 1% of Law Enforcement Officers get selected. He has also instructed at the F.B.I. National Conference and at the National Academy for new sessions.

Sergeant Diaz acquired the rank of 5th degree Master instructor in Tae Kwon Do and 6th Degree Master Chief in Crossfight. He started a training facility in his off time called “Sparta Fitness and Martial Arts.” Sparta served the north Tampa area for over 10 years offering spiritual fitness, martial arts and fitness training for both adults and children.

Eric is married to Karrie, who spent 32 years as a Dispatch Supervisor with the Tampa Police Department. He has two children Sarah 24 and Joey 30. He is very committed to his Christian values and is blessed to continue to have the opportunity to instruct.