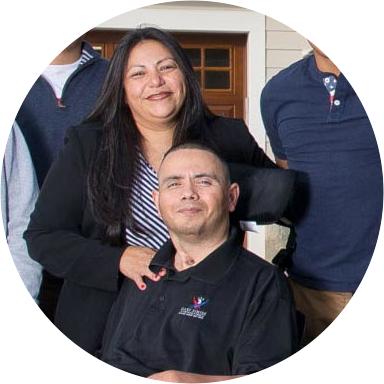 U.S. Army Captain Luis Avila grew up in a military family from Metairie, LA. He joined the United States Army in 2000 and became an officer in 2004. Luis served five combat tours in Afghanistan and Iraq.

On December 27, 2011, while leading his team, a mounted improvised explosive device (IED) detonated nearby. Three of his fellow soldiers were killed by the blast and two others were severely wounded. Luis suffered an amputation of his left leg, two strokes, two heart attacks, and severe lack of oxygen which caused anoxic brain damage. Ultimately, he was left almost completely paralyzed.

Luis was in a coma for forty days. Although the doctors felt he would not recover, his family stayed by his side. On February 13, 2012, Luis opened his eyes for the first time. He continues his extensive therapy at Walter Reed National Medical Center. Today Luis continues to progress while maintaining a positive attitude and an incredible sense of humor.