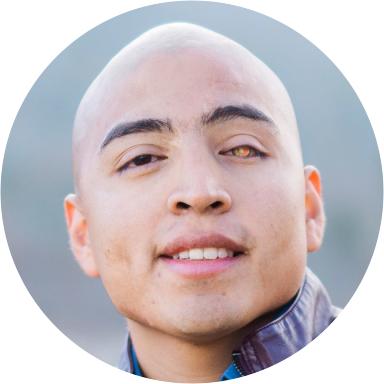 Retired U.S. Marine Corps Corporal Josue Barron was born and raised in Los Angeles, CA. He and his six brothers and sisters were raised by a single mother, and Josue quickly found himself getting into neighborhood trouble. To prove himself to his family, in 2007, he chose to join the Marine Corps at age 17 - a decision that changed his life forever. The military provided what Josue needed in his life: discipline, male role models, and leadership to be a man.

He joined 0311 (infantry) and was a fire team leader with 3rd Battalion 5th Marines out of Camp Pendleton. His first deployment was the 31st MUE in 2009 which took him to Japan, Korea, Thailand, the Philippines, and Australia. He received extensive training and felt prepared for his second deployment in 2010 to Afghanistan.

On October 21, 2010, Josue was on a morning foot patrol. On the way back to the base, his engineer stepped on an IED, hitting him and Josue. Both left with amputations. Josue received the Purple Heart and combat action ribbon and was taken to the Naval Hospital in San Diego.

Through recovery, his wife and mother kept him going by believing in him and challenging him to be stronger. He was also humbled and motivated by the stories of other Marines, saying “My heroes are other disabled veterans who have tougher challenges than me but still have a smile on their faces making it look easy.”

Josue’s previous living situation was complicated. His previous home provided countless challenges, including a bathroom and kitchen that did not accommodate his wheelchair and stairs to reach the second story, the garage, and several exits.

His specially adapted smart home has given Josue his independence back and eliminated the daily challenges caused by his disability. He now is able to play with his kids and is able to chase them in and out of the house in his wheelchair.

Josue is driven by his background and disability, which he says have made him stronger and have shown him anything is possible. For fun, he lifts weights and enjoys traveling California with his family. Josue is very interested in hand cycling and aspires to make the paralympic team.