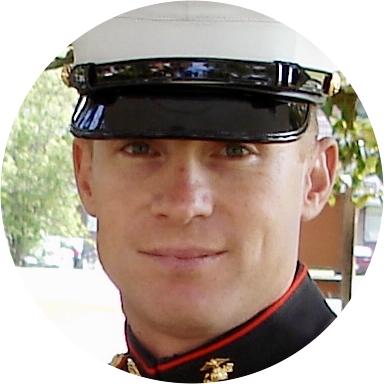 Retired U.S, Marine Corps Master Sergeant Eden Pearl joined the Marine Corps in 1994 after graduating from high school. His natural talents and leadership capabilities were quickly noticed as he ascended through the ranks, graduating from grueling specialized schools when he eventually became a Force Reconnaissance Marine.

He was beloved by his teammates, who respected and admired his intense focus and commitment to bringing out the very best in his Marines. During a combat operation on the evening of August 16, 2009, Eden and his special forces unit were heading back to base in a convoy of vehicles after having conducted a raid on a local Afghan village in Herat province. As enemy contact intensified, the vehicle Pearl was riding in struck a roadside bomb.

Eden’s injuries were by far more severe than the others who survived. He was in critical condition: 95 percent of his body had been burned. When he arrived at Brooke Army Medical Center in San Antonio, Texas, having been evacuated out of Iraq to Landstuhl Regional Medical Center in Germany, he was in for the fight of his life.

Early on during Eden’s recovery in November 2009, Gary had been visiting the same hospital to pay his respects to wounded service members and their families. Spending time at Eden’s bedside and consoling his wife, Alicia, Gary formed an instant bond to the Pearls.

A few years passed by since that day at the hospital before Alicia received a phone call from Gary telling her that it would be his honor for the Foundation to build her and Eden a home. In 2013, the Gary Sinise Foundation built the Pearls a mortgage-free, specially adapted smart home in the San Antonio area as part of its nascent Restoring Independence Supporting Empowerment (R.I.S.E.) program. The Pearl family were the first recipients of a R.I.S.E. home since the Foundation began in 2011.

Eden medically retired from the Marine Corps as a master sergeant when he was discharged from Brooke Army Medical Center. On December 20, 2015, Eden succumbed to his injuries. His life and legacy continue to be honored to this day with his wife, Alicia, serving as an ambassador of the Gary Sinise Foundation.