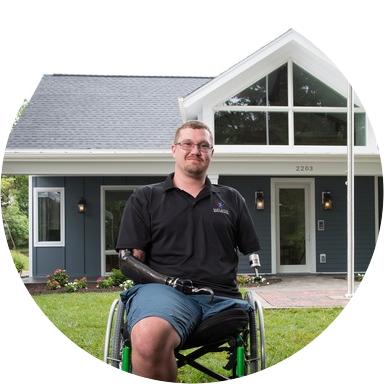 Retired U.S. Army Staff Sergeant Christopher Walker grew up in Virginia. He enlisted in the United States Army in October 2003 and was deployed in support of Operation Iraqi Freedom three years later. Christopher served his second tour in Khost Province, Afghanistan as an Explosive Ordnance Disposal (EOD) team leader. As team leader, Christopher identified and disposed of improvised explosive devices (IED), protected coalition forces and civilians from the effects of explosive hazards, and, most importantly, ensured the safety of his team members.

On April 24, 2012, Christopher was struck by an IED designed to destroy armored vehicles. He was thrown 30 feet and lost his left leg and both of his arms. His facial bones were shattered, his ear drum burst, and both eye muscles had to be reattached. Christopher was flown to Walter Reed National Military Medical Center on May 1, 2012 and remained there for over two years. He now lives in his home state and is enjoying the independence his specially adapted smart home has provided.