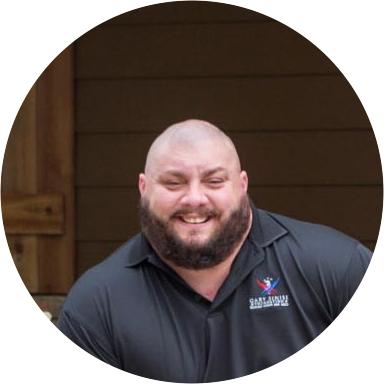 Retired U.S. Marine Corps Corporal Christian Brown enlisted in the United States Marine Corps in 2009. He returned home safely after serving 15 months in Marjah, Afghanistan. One year later, he was called back into action, this time to the Helmand Province of Afghanistan. Christian led his squad deeper into enemy territory, to the cities of Sangin and Kajaki. It was during this deployment where he endured several firefights and led 163 combat missions as a squad leader, a number unheard of as a Lance Corporal. As a result, he was meritoriously promoted to Corporal while on deployment.

On December 13, 2011, while leading his squad on a foot patrol in the city of Kajaki, Christian stepped on an improvised explosive device (IED). He sustained multiple traumas to both hands and arms, amputations of his right leg below the hip joint and left leg above the knee, internal injuries and blast wounds to his upper left thigh. Christian was in a drug-induced coma for almost a month.

In July 2015, the Gary Sinise Foundation broke ground for Christian’s custom specially adapted smart home in Munford, TN. “It’s just time to get back to being my own person...It’s really exciting because I know I can live on my own and I can take care of myself, even in a wheelchair.” Christian received the iPad and moved into his new specially adapted smart home on April 21, 2016.