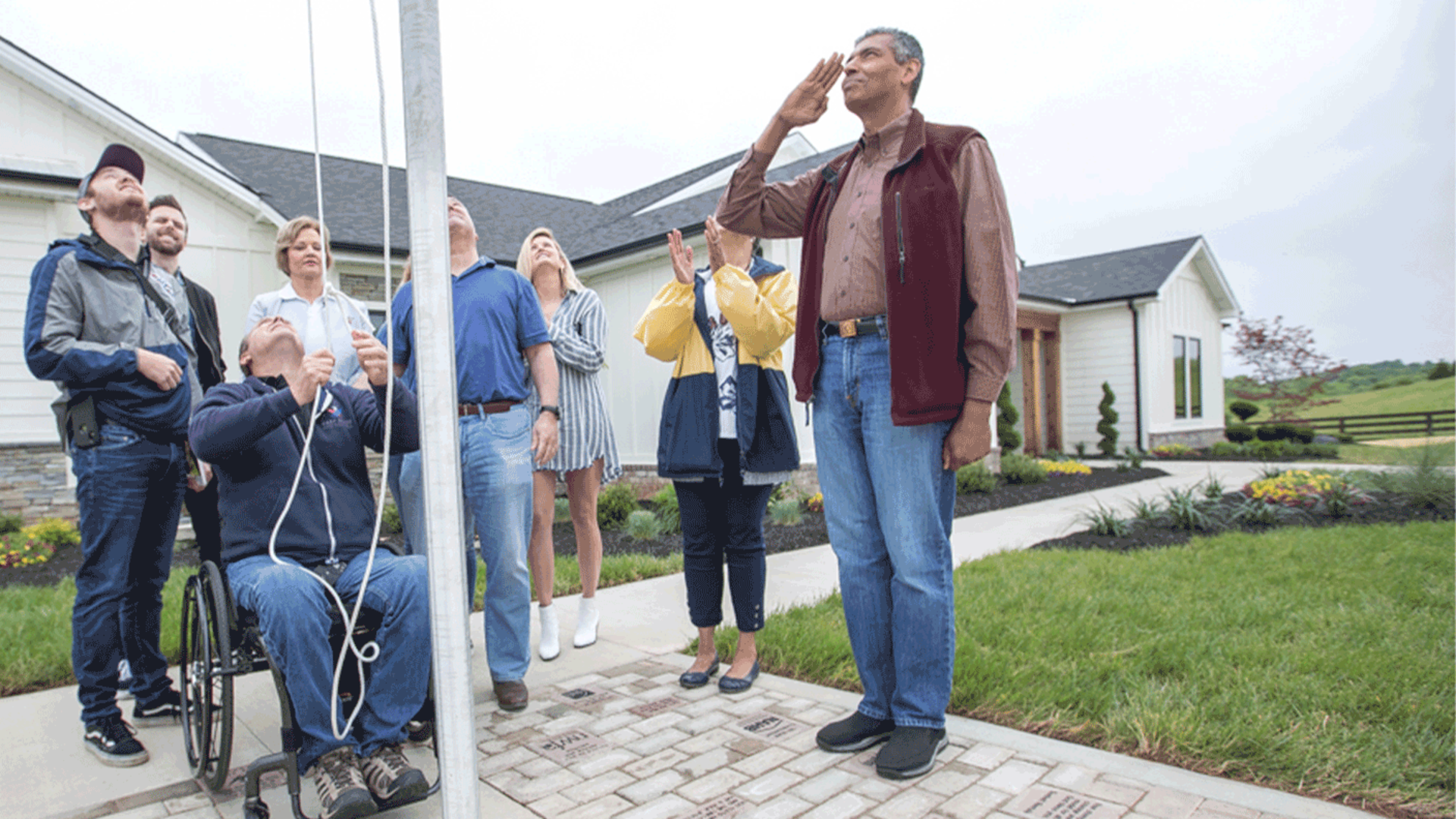 In the spring of 2019, not long after retiring from active duty, four-star general Vincent Brooks, a career military officer and a distinguished graduate of the United States Military Academy at West Point, joined the board of directors of the Gary Sinise Foundation.

The decision was grounded in a mission that is nothing short of personal.

“Make a difference in the lives of the people I am to touch on behalf of the Foundation,” said Brooks.

Drawing from his decades of military service, including combat deployments to the Middle East and Afghanistan, Brooks uses those experiences as a bridge that connects himself and the Foundation to veterans from generations past and present.

In less than a year, Brooks is already leading from the front as a representative of the Foundation.

At a gathering of combat veterans and Gold Star families in late November of last year, Brooks addressed members from Charlie Company, 2nd Battalion, 508th Parachute Infantry Regiment who had come together for a reunion.

For many, it had been nearly a decade since they’ve seen each other. The battalion experienced heavy losses to its ranks during deployments to Afghanistan over the years; the homefront wasn’t much safer with several having committed suicide.

By partnering with the nonprofit, Warrior Reunion, to facilitate members from Charlie Company reuniting, said Brooks, “It’s a tremendous way for the Gary Sinise Foundation to help make a difference for not only the old generations, because the Foundation does, but for this modern generation especially.” 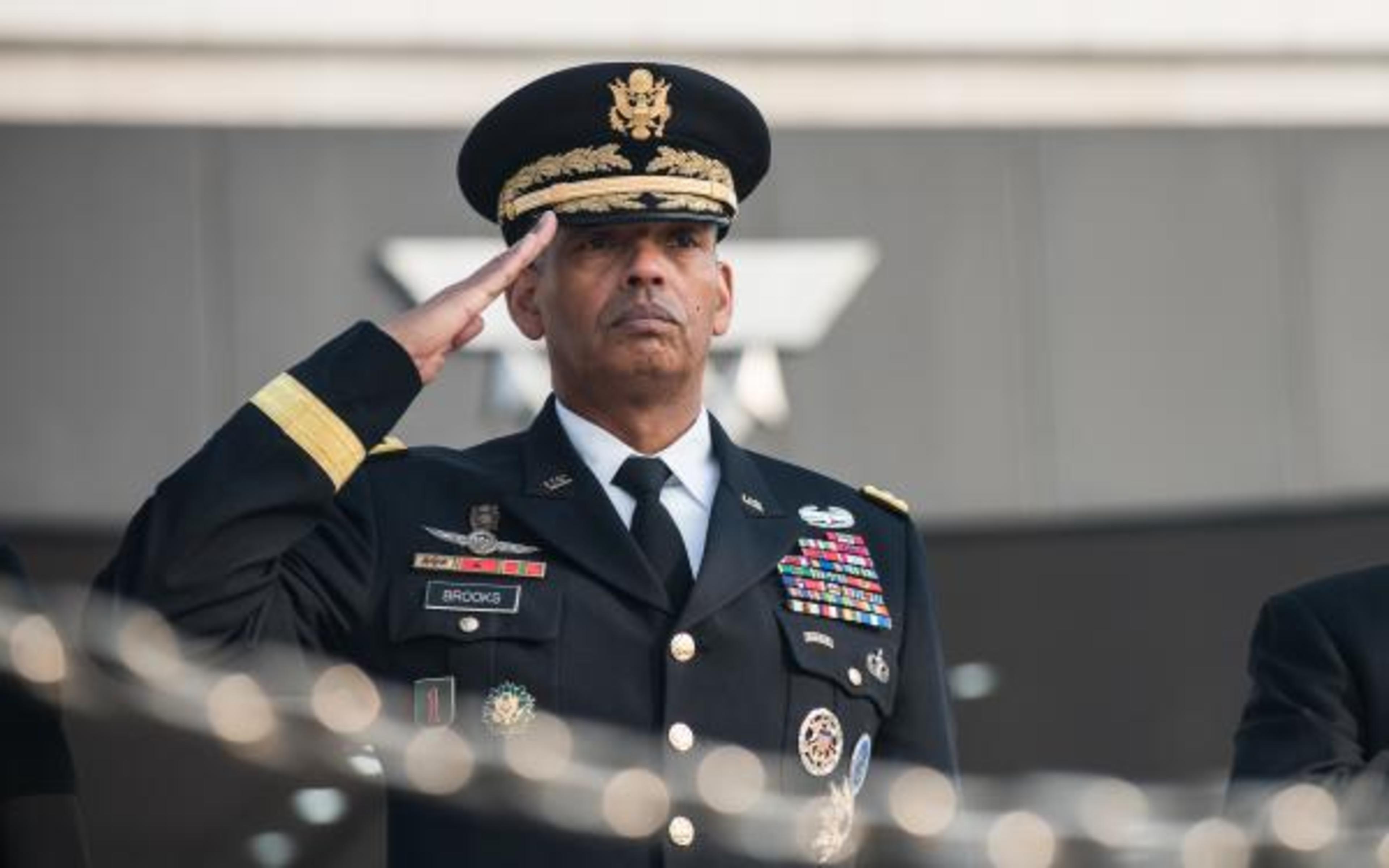 The struggle to reach today’s warriors, the 9/11 generation of warfighters, is a challenge many military unit associations fail to meet explained Brooks who knows a lot about the current generation of soldiers, sailors, airmen, and Marines from his years of command experience from serving on the Joint Staff at the Pentagon in 2003 to his final post in Korea in command of all U.S. and Korean forces.

It was in 2006, during a fundraiser for the construction of a 9/11 memorial on the grounds of the Pentagon, where Brooks met Gary Sinise while they and other invited speakers waited behind closed doors to address a gathered audience at the Union League Club of Chicago.

Their conversation moved from exchanging niceties to then uncovering their unique connection to Boyd McCanna “Mac” Harris. 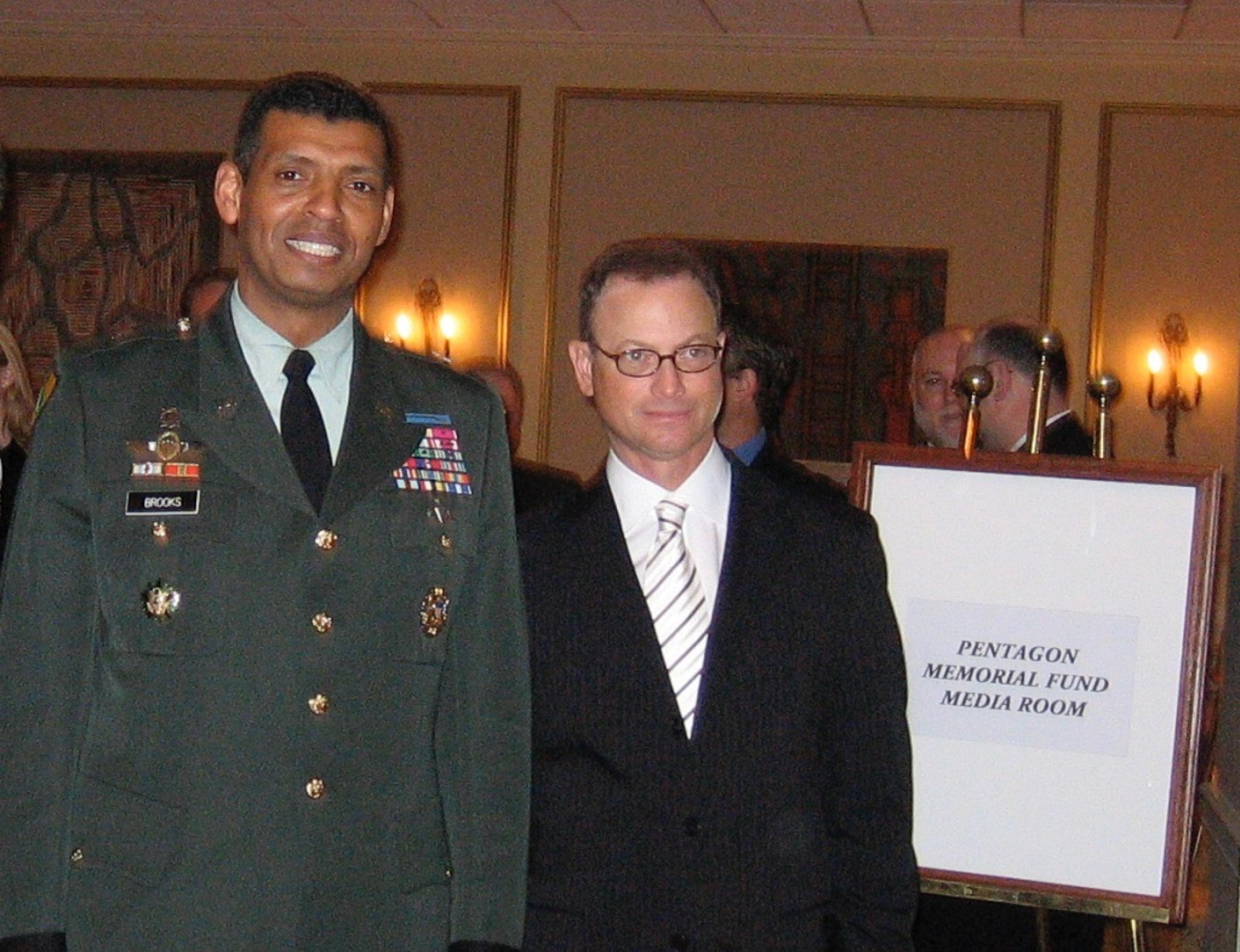 Mac was the oldest brother of Gary’s wife, Moira. He had graduated from West Point in 1966 just as the United States was increasing its commitment of forces in Vietnam. Mac distinguished himself during his two tours of duty in country and was the recipient of several medals and commendations including the Silver Star, Purple Heart, and the Vietnamese Cross of Gallantry.

When he came back from Vietnam, Mac joined the faculty at West Point where he instructed a soon to be commissioned second lieutenant by the name of Vincent Brooks.

“I shared with him [Gary Sinise] how much admiration there was for his brother-in-law,” said Brooks about Mac Harris and the lasting impact he made on his military career.

Before the Gary Sinise Foundation even existed, Brooks and Gary kept in touch in the ensuing years since meeting each other in Chicago.

Whether Brooks was deployed to Iraq or Kuwait, stationed at home or abroad, the bond he had formed with Gary in the Windy City remained unflappable.

It came as no surprise then that when Brooks neared retirement in 2018, he fielded a call from Gary asking him if he would be interested in joining the Foundation to serve on its board of directors. 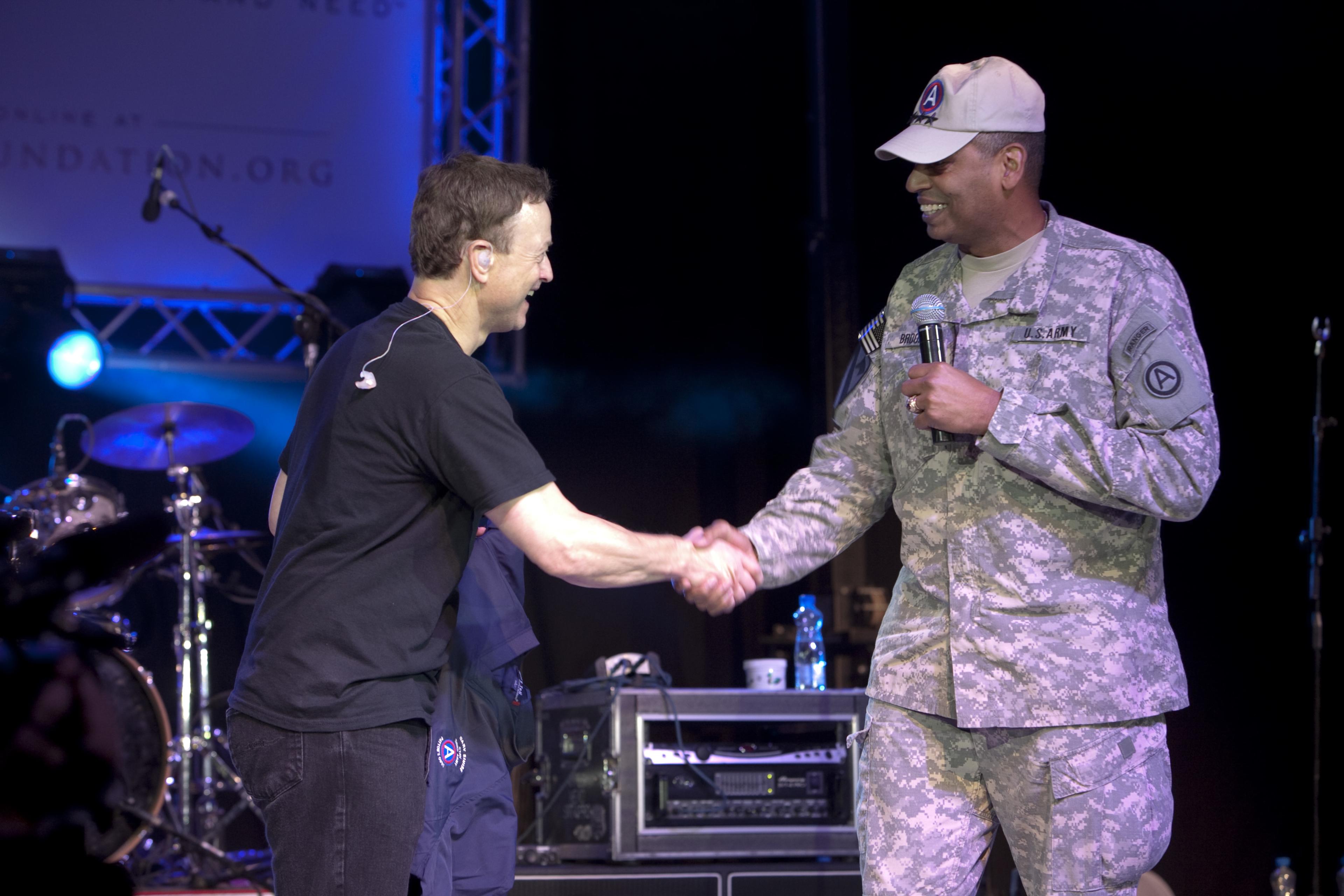 The courtship took little more than a few months.

“I know and respect and trust Gary Sinise,” Brooks explained about his reasons for joining the Foundation soon after retirement.

“Secondly, I knew about the work being done by the Foundation and found that to be righteous.”

Months before Brooks spoke at the reunion for Charlie Company, he saw first hand just how righteous the work of the Foundation is when he was asked by Gary to represent him and the Foundation during a Restoring Independence Supporting Empowerment (R.I.S.E.) event.

During a mission in Baghdad, Iraq, on May 31, 2008, U.S. Army Chief Warrant Officer 5 Gary Linfoot, an elite pilot assigned to the 160th Special Operations Aviation Regiment (SOAR), experienced a catastrophic mechanical failure to his AH-6 Little Bird helicopter and crash-landed.

The injuries left him paralyzed from the waist down.

During Gary Linfoot’s specially adapted smart home dedication ceremony in Clarksville, Tennessee, Brooks delivered a personal message to him on behalf of Gary Sinise and Americans from all corners of the country. 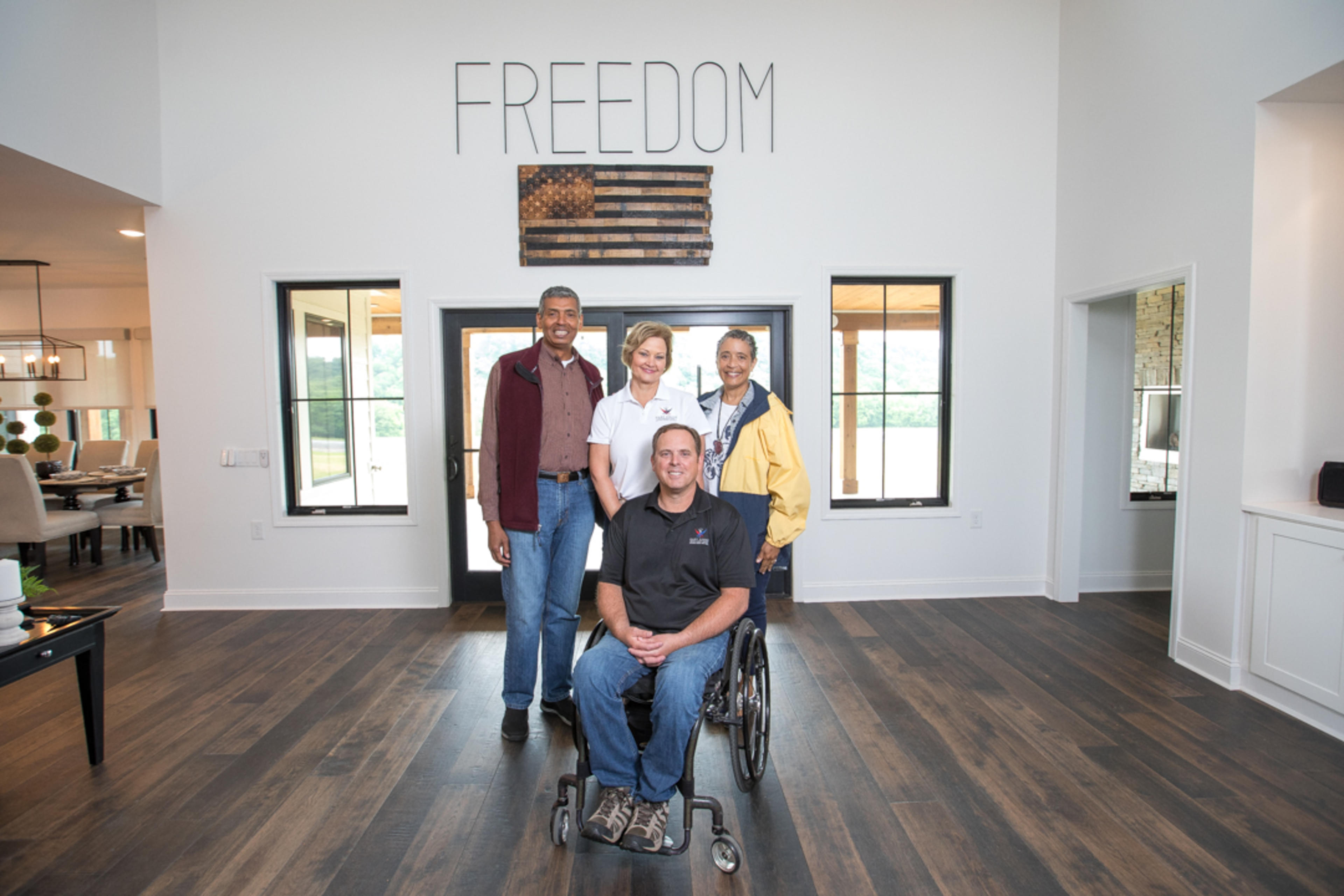 As Brooks looks ahead in the new year, he is focused on ensuring the Foundation maintains its cadence in using the accomplishments had in 2019 to keep up the momentum in 2020.

With new developments on the horizon, including organizing local chapters in cities across the country to connect the Foundation to military, veteran, and first responders communities, he said, “we’ll continue to add more to performing arts, entertainment, and behavioral health activities by partnering with additional individuals and additional organizations to increase the reach in that arena.”

“The Gary Sinise Foundation can cause progress and impact for others who have the expertise to create the reach and close that gap where some of our veterans don’t feel safe to share what they’re really feeling or haven’t reached out soon enough or can’t find the right resources,” he said.

Seeing how the reputation of the Foundation has continued to grow and become a leader in its own right, so too, has its stewardship of an increased share of donations to fulfill the obligations of its mission to serve and honor those in the Armed Forces, veterans, first responders, and their families.

Continuing to serve others, albeit, in a different uniform on behalf of the Gary Sinise Foundation, is the next evolution in Brooks’ mission and a purpose-driven life that began when he was a cadet at the United States Military Academy.

Achieving the mission, as a member of the board of directors, is personal, after all.