​Nearly a decade had passed since members of Charlie Company, 2nd Battalion, 508th Infantry Regiment (Red Devils) had seen each other since their days stationed at Fort Bragg with the 82nd Airborne.

Through email, occasional phone calls, and social media, they kept in touch as best they could.

But that wasn’t enough.

What they needed was an objective to come together and tighten the bonds of brotherhood that they had formed years ago while on base in North Carolina, and that was tested and proven resilient while under enemy fire from Al Qaeda and Taliban militants in Afghanistan.

Where and when to execute the objective was taken care of by the nonprofit, Warrior Reunion Foundation, who held a weekend-long reunion at Lucky Arrow Retreat in Dripping Springs, Texas, for 56 members of Charlie Company and four Gold Star families.

The entirety of the program's cost, including travel, lodging, meals, and activities, was covered by the Gary Sinise Foundation through its Relief and Resiliency program.

As part of Relief and Resiliency, t​he Foundation has taken steps to address the mental health needs of the nation’s service members, first responders and veterans through strategic partnerships that have led to innovative and empowering treatment methods, including supporting peer-to-peer retreats.  ​

“It was something they needed that they didn’t realize they needed until they were actually there,” said retired Staff Sergeant George Serrano about the value of the retreat, which took place on November 22.

Throughout the retreat, the men talked a lot about their time in combat, about being on patrol and shot at, about close calls and near misses.

They reminisced about engagements with the Taliban and how they performed in firefights. 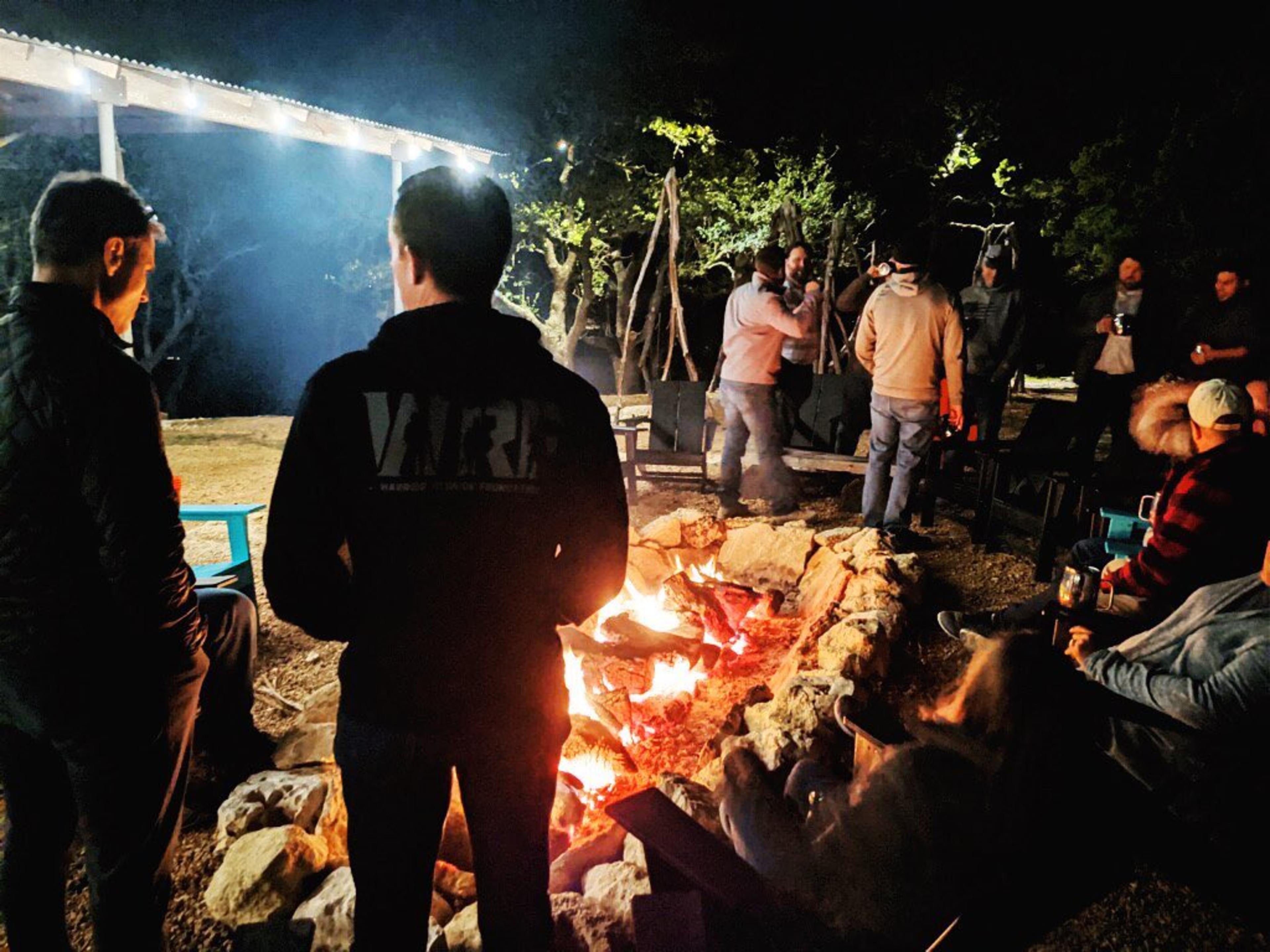 Night after night, they confided in each other. Their friendships rekindled.

The conversations ebbed and flowed, as some spoke about struggling to transition from military to civilian life and the challenges of keeping a job and finding those elements embedded in every military unit — a sense of purpose, structure, and mission — nearly nonexistent in the civilian world.

Their friends who had been killed in action were fondly remembered.

Serrano, himself, deployed with Charlie Company to Afghanistan three different times between 2007 and 2012.

His second tour to the Arghandab Valley near Kandahar, a region the troops referred to as the Devil’s Playground, he said, was the hardest.

It would also prove to be the deadliest for Charlie Company.

“We lost eight to nine guys during that deployment.”

On that same deployment and attached to second platoon was 20-year-old, Chris Moon from Tucson, Arizona.

The heat he delivered from the mound was fast enough that it grabbed the attention of the Atlanta Braves organization who decided to draft him in 2007.

Chris turned their offer down to enroll at Arizona, his dream school. But after one semester, he decided to drop out so that he could serve his country on another field.

Before his 21st birthday, Chris, who was serving as a sniper, succumbed to injuries from an improvised explosive device (IED) that had remotely detonated underneath him as he and his unit were returning to their forward operating base after a patrol.

His death, like many others in 2nd Battalion, shook them to their core.

“I saw how broken the guys were, especially those that were close with Chris,” said his mother, Marsha, an elementary school teacher who was among four Gold Star families in attendance at the reunion.

“It was an opportunity for me to meet new soldiers who had served with Chris,” she said about being amongst her son’s brothers in arms. “I’m there for them just as much as they wanted to be there for me.”

For Gold Star families struggling with their loss, the reunion provided a setting to share their grief amongst each other and to listen and offer advice, said Marsha.

“We’re able to share even more than what we can share with a stranger or even family members because we have that special bond.”

In the last conversation she had with her son, Marsha said Chris’ typical comments about his unit were different because of the environment they were operating in, and the number of casualties they experienced from undetected roadside bombs and Taliban ambushes.

“I’m just letting you know, Mom, that I’m being shot at every day, so pray for me, Mom,” said Chris at one point during that phone call.

On the second day of the reunion, a memorial service was held in the morning to honor the lives lost from Charlie Company. 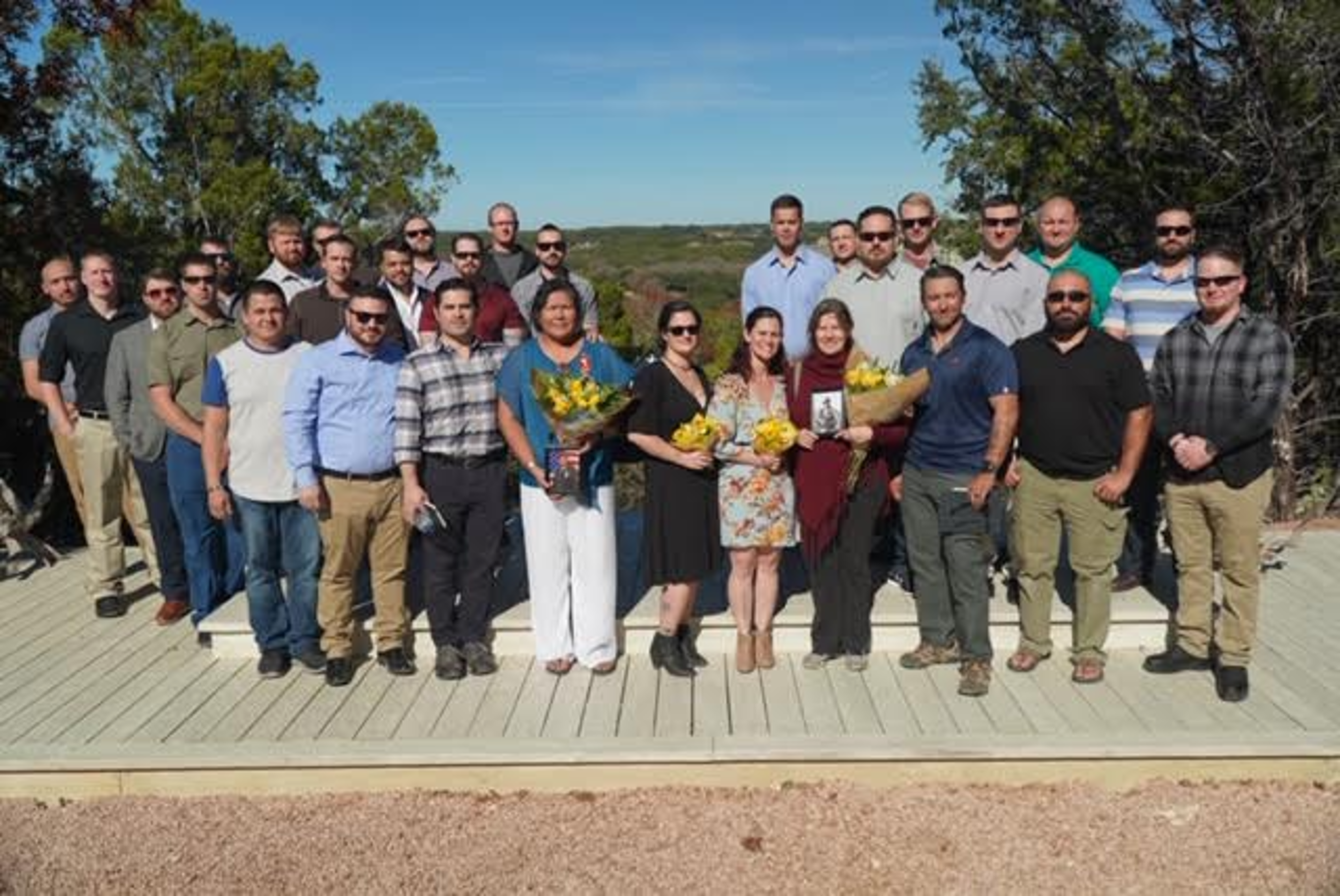 Standing at attention, one by one, their names and ranks were called.

The chime heard from a not too distant bell being rung was the only sound that was heard after each name of the fallen was called:

“It was pretty emotional seeing Guzman’s mom,” said Serrano who was deployed to Afghanistan with Guzman when on March 8, 2008, the 25-year-old sergeant succumbed to wounds after the Humvee he was riding in struck a roadside bomb near the Pakistani border.

“It’s heartbreaking to see her, seeing her cry at the memorial and us talking about him and all the things we remembered.”

Each day of the retreat, Serrano and the others committed themselves to Warrior’s pillars of camaraderie, community service, and wellness. 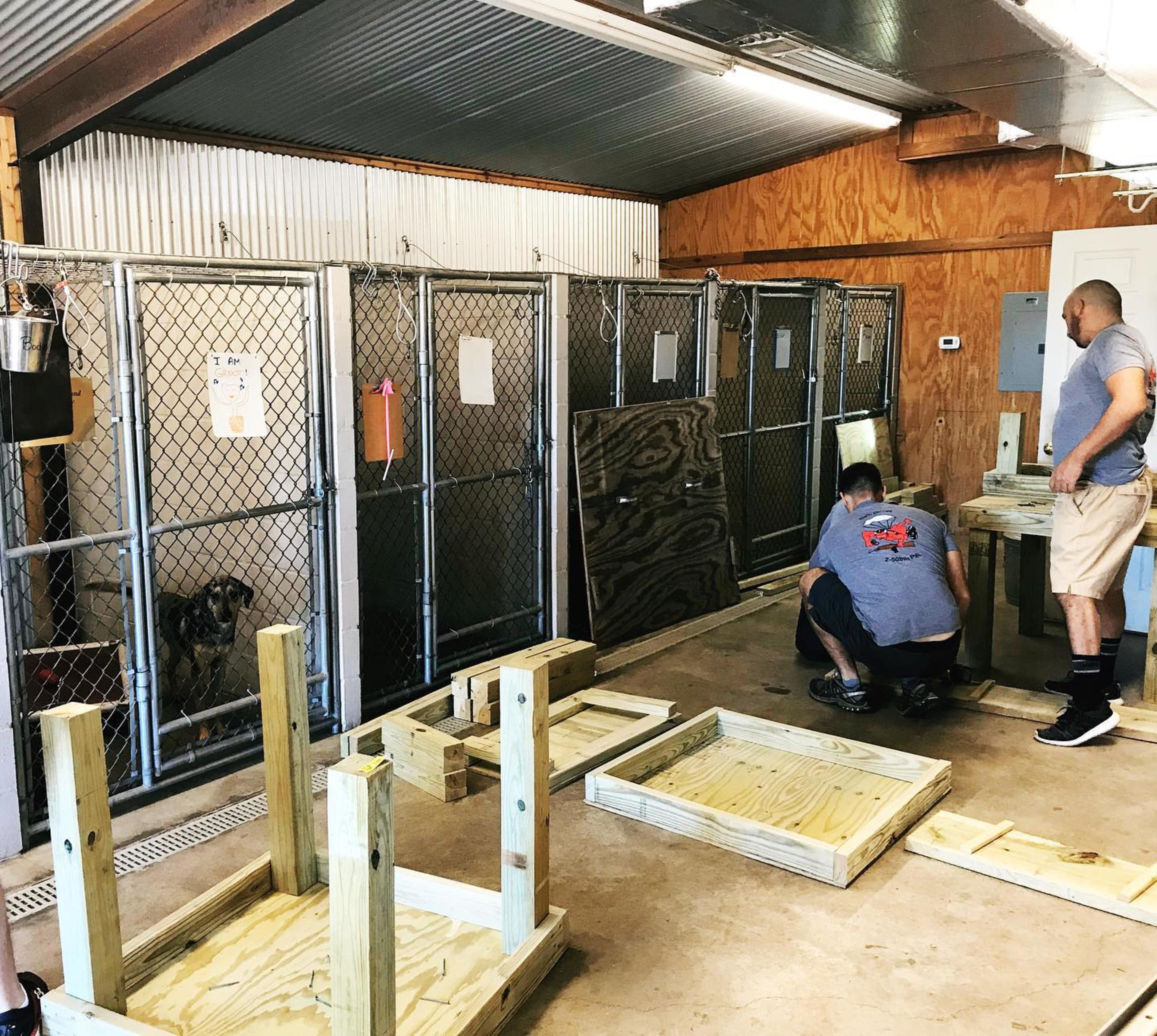 Like the cohesive fighting unit they had trained to become, members of Charlie Company banded together during their community project at Service Dogs, Inc. where they helped renovate the six-acre grounds used to train service dogs for supporting Texans, and veterans, with physical and mental challenges.

“Doing service projects as veterans, I think it counters the narrative and shows people that we’re not broken,” said Dave whose last name has been withheld for privacy reasons.

“Pulling together and interacting in a positive way with the community, directly counters that narrative,” he added.

As part of their wellness training they received a briefing from retired Army Gen. and Gary Sinise Foundation Board of Directors member, Vincent Brooks, about maintaining contact with each other in the months and years ahead. He also explained what resources were available to them and their families through the Foundation. 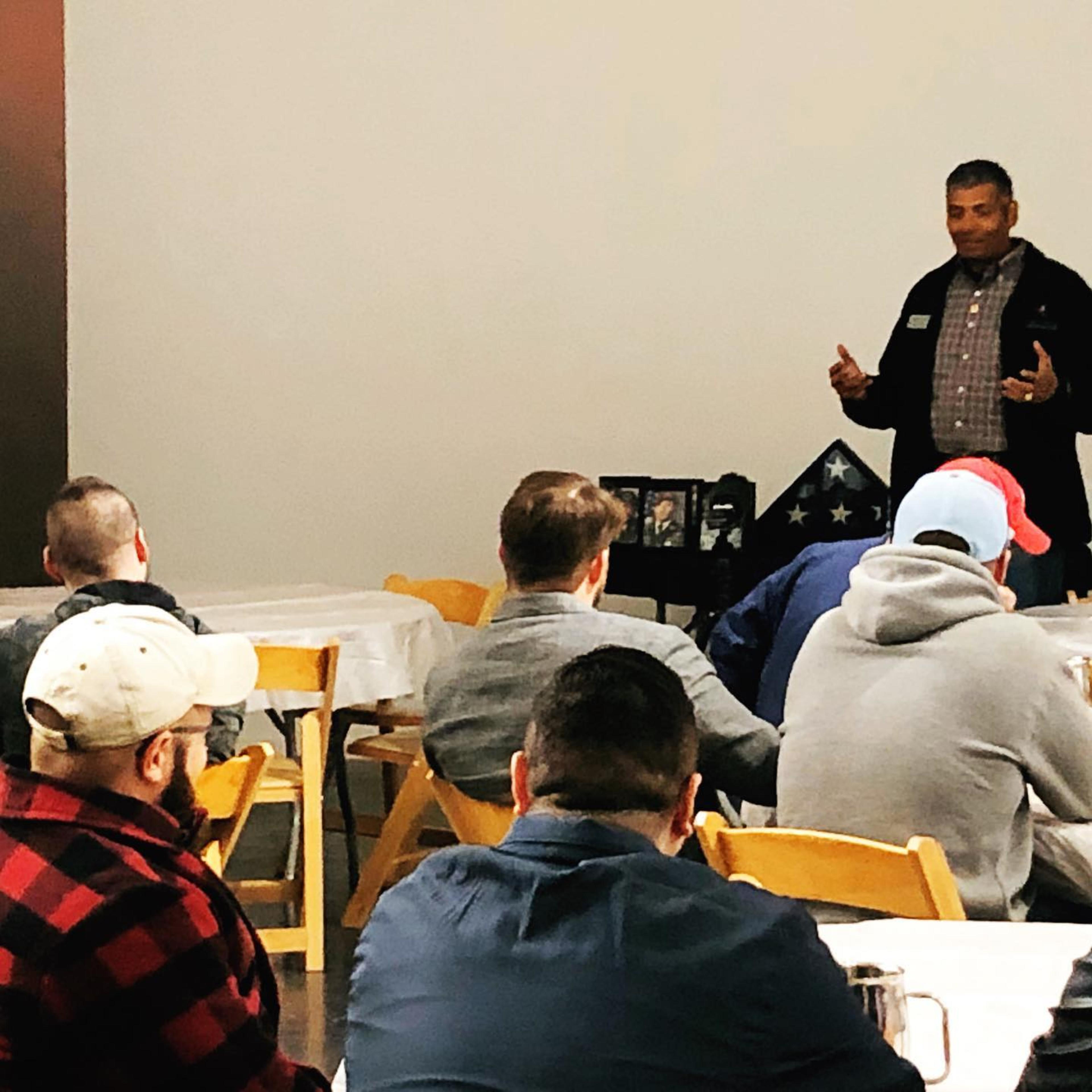 The remarks from Brooks complimented those of a representative from Purdue University’s Military Family Research Institute, who gave everyone an overview of counseling options available in their respective communities.

Three months before deploying with Charlie Company on his first tour in Afghanistan, Serrano was taken under the wings of the more experienced enlisted guys.

“You know what you’re doing and how you’re going to do it,” he said about their preparing him for combat and knowing his role inside and out.

“You know how to watch your guys’ six.”

Charlie Company ​lost many brothers to combat-related injuries from deployments in Afghanistan and upon their return, to suicide and drug overdoses.

In the ensuing years, some have gone on to successful endeavors in and out of uniform. For others, their challenges on the home front, haven’t been so easy to overcome.

Yet the brotherhood that ties them together has endured.

They’re all watching each other’s six.