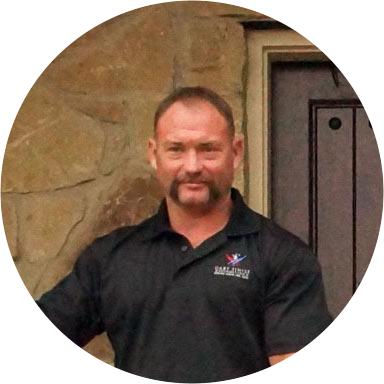 Retired U.S. Marine Corps Gunnery Sergeant Travis Green grew up in Texas and enlisted in 1999. He served three tours, his first in 2003 to Kuwait and a year later to Iraq where he volunteered for the Explosive Ordnance Disposal (EOD) program. During this time, he was trained to neutralize unexploded ordnance (UXO) and improvised explosive devices (IEDs). As an EOD, Travis served on the front line every day. His primary job was to find and dismantle IEDs to ensure his fellow Marines’ safe passage.

In April 2011, Travis deployed to Afghanistan. In September of that year, shortly before he was scheduled to return home, Travis fell under fire during a combat operation. He was severely injured by an IED and lost both legs above the knee.

Travis opened his own business in 2014 and plans to earn his degree in mechanical engineering. He has two medical patents pending that he hopes will help others who share similar injuries. In October 2015, the Green family received the keys and iPad to their custom specially adapted smart home in Canyon Lake, TX.