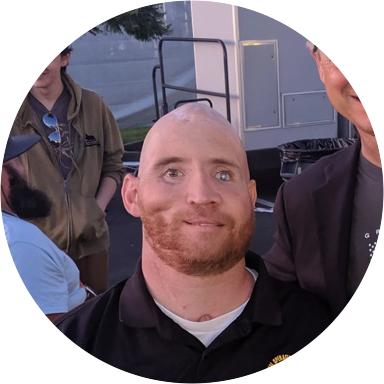 ​During a training exercise on October 5, 2015, at Camp Pendleton in San Diego, California, retired U.S. Marine Corps Staff Sergeant Stuart DiPaolo was navigating an all-terrain vehicle when he lost control on the weathered course. Rain had pelted the area the day before, causing conditions on the ground to be more challenging to navigate than initially assessed.

When his vehicle began to go up an embankment, Stuart made the split-second decision to bail out as the best course of action for his overall safety. But upon jumping from the vehicle and landing on the ground, the vehicle then rolled over on its side, where the roll bar ended up crushing his head.

When medical help arrived, every bone in his face was broken. Stuart severed the right side Carotid artery. His neck was broken, and his left eye was detached from the optical nerve. His life was on the line, yet for this Marine, overcoming the obstacles in front of him was not insurmountable. Persevering through challenging situations was a skillset he had learned throughout his upbringing in Gray, Maine, and upon enlisting in the armed forces.

The youngest of two children to a working mother and father who was rarely home because of his job as a truck driver, Stuart and his brother manned the house by taking care of household chores and other duties to lighten the load for their mother. An accomplished trumpeter, he played in the school’s Jazz Band and Concert Band and earned the Louis Armstrong Award in his senior for his mastery of the instrument.

In addition to playing the trumpet, Stuart was part of the football team, and like his participation in band, he enjoyed the camaraderie and team cohesion both environments created. It was during this time when, after the terrorist attacks on September 11, 2001, he realized what his plans would be after graduation.

Stuart entered Marine Corps boot camp in June 2004, two days after his high school graduation. Following combat training, he was assigned to 3D Force Service Support Group (3D FSSG) at Camp Kinser in Okinawa, Japan. As a Lance Corporal, Stuart worked on high mobility multi-purpose wheeled vehicle (HMMWV), MTVR (7 Ton), and logistic vehicle systems. In 2006 he volunteered to deploy in support of Operation Iraqi Freedom (OIF) and was stationed at Camp Taqaddum, Al Anbar Province. He would return to Iraq for a second deployment in February 2008.

In the ensuing years before deploying in support of Operation Enduring Freedom in Afghanistan in January 2014, Stuart was promoted to Staff Sergeant through hard work and determination after passing numerous occupation schools and courses, which included several associated with Marine Corps Special Operation Command (MARSOC).

Since his injury in 2015 and follow on surgeries and setbacks in treatments, his wife Michelline and their two daughters, Kaylee and Audrey, have empowered Stuart on his road to recovery. While his left arm and left leg are paralyzed and with limited vision in his right eye after losing eyesight in his left, Stuart is intent on being the rock in the family and serving as a mentor to other wounded service members battling physical and psychological wounds that come with life-changing traumatic injuries.

A specially adapted smart home will not only ease his daily struggles and mobility needs around the house, but it will also enable him to spend more time with his family and supporting their needs instead of his own.