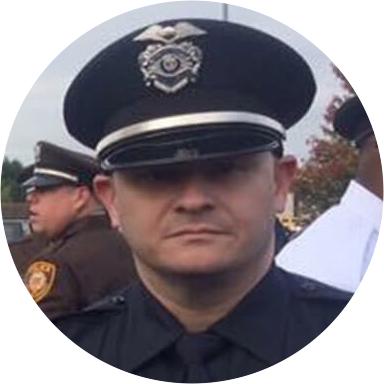 Police Officer Ryan O’Connor was raised in St. Louis, Missouri. His father was a Marine Sergeant in Vietnam and spent 44 years in law enforcement. Ryan’s older brother, Kenny, was a cryptologist assigned to Seal Team 8, serving 20 years in the Navy.

Following in his family’s footsteps, Ryan decided to dedicate his life to protecting people. After graduating from the police academy in 1997, he was hired by the St. Louis County Police Department. Ryan served there for 12 years before deciding to join the Ferguson Police Department.
Ryan accepted a job for the Arnold Missouri Police Department with the hope of working in an area close to his home. He received multiple awards for his admirable service. On December 5, 2017, Ryan was transporting a burglary suspect. The suspect pulled out a hidden firearm and opened fire inside of Ryan’s police SUV, shooting him in the head.

He was rushed to emergency surgery where a large portion of his skull was removed. Ryan spent months rehabilitating and overcame a series of infections and other setbacks. Just two months after the shooting, Ryan was able to speak his first full sentence. “I just gotta get my badge,” he said, showing that his will remained intact.

Ryan, with the unwavering support of his wife, Barbara, and their sons, continues to work tirelessly in his rehabilitation. The Gary Sinise Foundation was honored to provide this courageous officer and his deserving family a specially adapted smart home, where the families focus can remain on recovery, peace, and comfort.