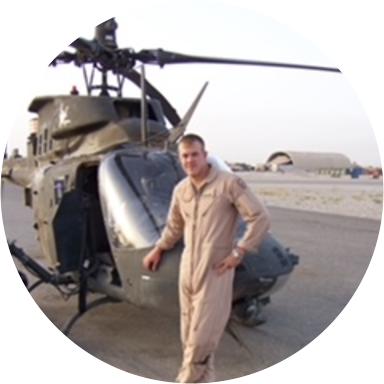 Patrick grew up in the small town of Brunswick, Missouri. He spent most of his childhood flying, hunting, and playing competitive sports. After the attacks on September 11, Patrick was called to join the military and quit his job the next day to join the Army as an Airborne Infantryman. Upon graduating Basic Training with honors, he was assigned to the infamous 101st Airborne Division out of Fort Campbell, Kentucky. Shortly after that, Patrick deployed to Iraq and spent 13 ½ months in combat operations. Returning from combat, Patrick attended Warrant Officer Candidate School and Army Flight School, finishing again with honors and, again, deploying for a second time to Iraq.

On March 1, 2007, Patrick was flying a mission over Kirkuk, Iraq, during his second deployment. Suddenly his helicopter unexpectedly began hurtling toward the earth resulting in a catastrophic crash. While Patrick was able to perform maneuvers that saved the lives of himself and his co-pilot, his injuries were undoubtedly serious. As a result of the crash, Patrick died two times on the way to the hospital, sustained nine fractured vertebrae, a crushed pelvis, and lost his left leg above the knee.

After almost 60 surgeries and enduring struggles one can only imagine, Patrick has taken his experiences and uses his story as a way to show others that you can overcome any challenge life throws your way. While he continues to thrive as an Air Traffic Controller and co-host of a podcast, Veterans’ Radio Hour, living in a barrier-free home would allow Patrick the opportunity to focus more energy into his goals as a mentor for others suffering from PTS, amputations, and struggles of life.

The quote Patrick lives by is, “The measure of who we are is what we do with what we have.”

The Gary Sinise Foundation is deeply inspired by Patrick and looks forward to building a specially adapted, smart technology home to ease his daily struggles and mobility needs around the house. Please join us in thanking Patrick for his service to our country!