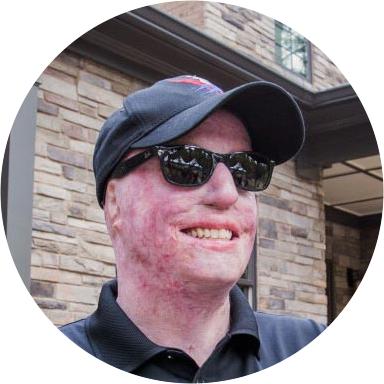 Retired U.S. Army Sergeant First Class Michael Schlitz was born in Milan, IL. He enlisted in March 1996 and served in several positions including Rifleman and Platoon Sergeant. While in Baghdad, Iraq on February 27, 2007, Mike and his crew were on a road-clearing mission when their vehicle was struck by an improvised explosive device (IED). His gunman and medic were killed instantly and his driver passed away shortly after the blast. Mike was sitting in the passenger seat and was ejected from the vehicle. He lost both hands and his eyesight in his left eye due to a scarred cornea. He sustained burns on 85% of his body.

Once he was cleared to travel, Mike was transported to Brooke Army Medical Center and placed in ICU for six months. He said, “On the day I got hurt, I lost my entire crew. Now, I want to live a better life for them, a life they would be proud of.” His mother Robbi has become Mike’s full time caregiver and is a constant source of motivation. They currently live in Fortson, GA in their custom specially adapted smart home. Mike also serves as a Gary Sinise Foundation ambassador and in 2017 joined the Gary Sinise Foundation staff as the Military & Veteran Resource Manager.