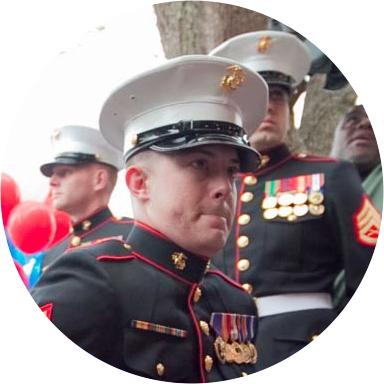 Retired U.S. Marine Corps Sergeant Michael Nicholson was deployed to Afghanistan while serving in the Marine Corps. On July 6, 2011, while on a combat foot patrol, he was injured by an improvised explosive device (IED). Michael lost both legs and his left arm in the blast. He also suffered a severe brain injury.

Eight months after arriving at Naval Medical Center San Diego, Michael returned home to Tampa, Florida. Upon his arrival, he was greeted by thousands of cheering supporters. “I’m truly blessed that the Tampa community and organizations have joined together,” Michael told an interviewer, adding, “Please pray for the guys still in Afghanistan right now and for the soldiers, sailors, airmen and Marines recovering in Bethesda, San Antonio and Balboa. Pray for the ones who did not make it back.”

On January 9, 2014, Michael was given the keys and iPad to his new custom specially adapted smart home in Tampa.