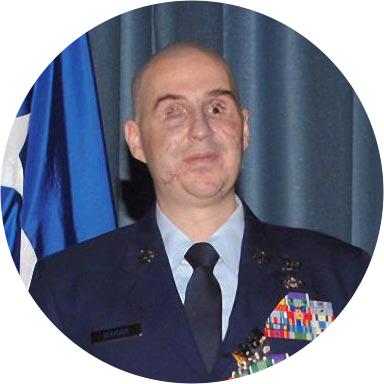 U.S. Air Force Technical Sergeant Matthew Slaydon grew up always knowing he wanted to be in the military. In 1989, Matthew joined the US Air Force. After several years as an aircraft armament systems technician, in 2002, Matthew retrained to become an explosive ordnance disposal (EOD) technician.

During his third deployment as an EOD technician, Matthew was sent to Baghdad as a counter-improvised explosive device (IED) team leader. On October 24, 2007, his team got a call to investigate possible IEDs around an area where an anti-American sign was found. Matthew does not remember anything that transpired on that day, but it was later determined that an IED filled with 15 pounds of homemade explosives, rebar, nails, and wood screws had exploded two feet in front of him.

Matthew was flown to three different medical centers before arriving back in the US to receive over 16 months of treatment at Brooke Army Medical Center and the Center for the Intrepid in San Antonio, TX. Matthew lost his left dominant arm, and his left eye suffers bilateral blindness without light perception and many other severe injuries.
Through his recovery process, Matthew was inspired to keep going because of his sense of duty, his family, and his military brothers and sisters.

The Gary Sinise Foundation was honored to provide a specially adapted smart home for Matthew, which has relieved many stresses and daily struggles.