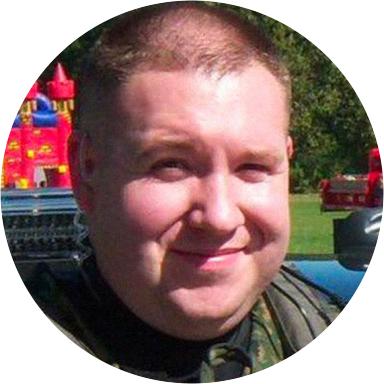 Retired Police Sergeant Mathew Crosby grew up in Spanish Lake, a suburb of St. Louis, Missouri. Playing sports, including baseball and soccer, marked his upbringing. But it was ice hockey where he excelled at the most and developed aspirations to one day play in the NHL. Spending his formidable years in middle school and high school playing hockey for the AAA Amateur Blues — a breeding ground for developing collegiate and pro ice hockey talent — Mathew, a four-year varsity player, built up his physicality and mental strength game after game, tournament after tournament. He would soon use that same toughness and conditioning after graduating high school and pursuing the police academy.

While he was inspired to become a police officer from watching old cowboy movies and police television shows, Mathew felt called to service for a more altruistic reason: sticking up for the innocent and weak and protecting victims from criminals. One month before he graduated from the police academy, on the morning of September 11, 2001, Mathew found himself even more inspired to serve and protect the St. Louis community after he and his classmates watched in horror of the devastation caused by the terrorist attacks.

When he graduated from the police academy, he was adamant in serving in a high-crime community. Assigned to the city of Pine Lawn where both his mother and father were raised, Mathew was thrown in the deep end from the get go as a patrolman where he responded to shootings and homicide calls in the poverty-stricken city. After a few years on the job, he was able to transition to the police department’s drug task force where his assigned unit made a dent in the area’s illicit narcotics trade.

In May 2006, Mathew joined to the Rock Hill Police Department where the Chief of Police sent him to undercover school to eventually become the department’s attaché with the D.E.A. After completing the advanced school, Mathew went back to patrol duties as he awaited assignment to the D.E.A. but was soon after routed to a multi-jurisdiction S.W.A.T. team instead. Though he never received a call while on the S.W.A.T. team, the training he received was invaluable and became a distinguishing feature of his service record.

After four years serving in the Rock Hill Police Department, in April 2010 Mathew decided to apply to the Maplewood Police Department which served an even larger city in St. Louis with a much higher crime rate. He would also be in a greater position to advance within the department and make an impact in the local community, utilizing the breadth of his skillsets and law enforcement experience from past jurisdictions.

On the day of his interview, April 9, 2010, Mathew, who had been working the overnight shift, responded with his partner to a domestic disturbance call at an apartment. The suspect’s girlfriend reported her boyfriend to be drunk, had hit her, and who was possibly armed with a pistol. After knocking on the apartment door which was locked and attempting to contact the suspect, Mathew and his partner moved away from the door towards the nearby stairwell. All of a sudden, the suspect opened the apartment door and began firing at the police officers.

Mathew sustained severe injuries when a bullet struck his shoulder and proceeded to his spinal cord, which immediately paralyzed him. Rushed to Mercy Hospital, Mathew underwent life-saving surgery. His C5-C7 vertebrae’s were paralyzed which categorized him as a quadriplegic. Despite the abrupt and permanent change in his life, Mathew maintains his physical fitness regiment by working out and going to CrossFit and spending time in the outdoors hunting and fishing with his two teenage sons. He has even begun an adaptive CrossFit program for kids and adults who use a wheelchair.

Mathew’s previous living situation was not conducive to his injury and mobility limitations. With 24/7 caregivers to attend to his daily needs, in addition to supporting his two sons, Mathew’s home was unfit to accommodate occupants comfortably.

The Gary Sinise Foundation, with the support and generosity of the American people, was honored to provide a specially adapted smart home for Mathew Crosby.