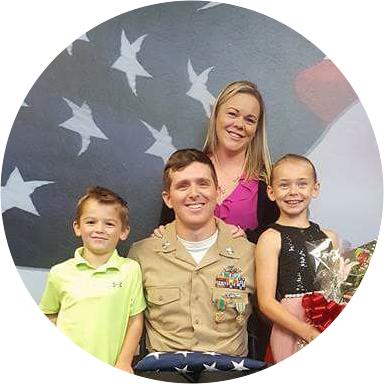 Joshua Geddis always remembers wanting to join the military, and one day, after a call from the Navy recruiter, he signed right up. Joshua joked, “It must have been one of the easiest recruitments he had in a while.” Following Basic Training and school, Joshua was stationed in Gulfport, MS. He made three deployments to Japan/Indonesia, Iraq, and the Philippines before transferring to Oak Harbor, WA, where he made his last two deployments to East Africa.

On January 16, 2017, while upgrading the securities of the Forward Operating Base, one of the barriers became unstable and fell on top of Joshua, crushing him with 4,500 pounds of weight. Although he was quickly unpinned, due to the extreme mass, his L1 burst causing Joshua to lose feeling below his waist, leaving him paraplegic.

Joshua’s road to recovery wasn’t easy, but his spirits remained unwavering. His mentality is, “Can’t be sad, that won’t help. Being mad at yourself for something you cannot control doesn’t help anybody.” And so, he continued to thrive as best he could with his new norm.

Joshua looks forward to everything a Gary Sinise Foundation specially adapted, smart-technology home will bring him. It will empower him at home, easing his way of life. Joshua said, “I just want to be comfortable in my daily life and being here makes it harder. It’s simply things that people don’t think about that really make a difference in a house. Having roll under sinks, a work area in the kitchen, more than one door to get in and out of the house, being able to get into the kids' rooms (just to see if it is really clean), and a garbage disposal switch I could reach would make things so much easier and improve life.”

The Gary Sinise Foundation looks forward to building Joshua a home to ease his daily struggles and mobility needs around the home.