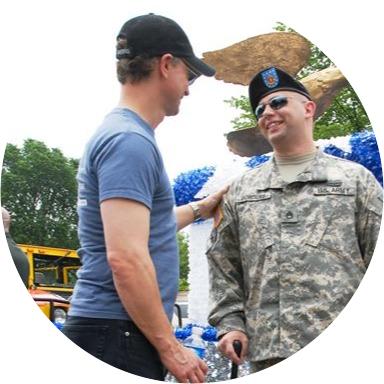 After a year-long tour of duty in Iraq, on January 5, 2006, just six days before he was scheduled to return home, then retired U.S. Army First Sergeant John Borders was participating in a routine convoy when his Humvee was hit by an improvised explosive device (IED), critically injuring him. Within minutes, air support arrived and transported staff sergeant Borders to Landstuhl Regional Medical Center in Germany. He was quickly transferred to the Intensive Care Unit (ICU) at Walter Reed Army Medical Center in Maryland and was scheduled for surgeries every other day for several months, receiving over 55 surgeries in all. The extent of his injuries required him to go through limb salvage with his left leg and have his right leg amputated below the knee.

With the help of family and friends, and his own self-imposed drive to return to active duty, staff sergeant Borders stayed positive, doggedly working through session after session with his physical therapist until he regained more use of his limbs and learned to walk using a prosthetic leg. Then, he learned to run. Every time he achieved a goal, he set himself two more. After more than three years, staff sergeant Borders completed his Medical Evaluation Board and returned to active duty as a counterintelligence special agent. Borders served over 27 years in the army, 12 of which he served as a handicapable individual. He deployed a total of five times, completing his last tour in Afghanistan with his new leg. In January 2018, he retired as a first sergeant, a title he aimed to achieve his whole career.

Today, Borders lives in Florida with his wife, Mollie, also an Army veteran, and their two children, Brittany and Xander. Post retirement, Borders has found a new way to serve others, redefining himself as a scuba instructor because he wants to help individuals with limited mobility learn to dive and find freedom from their pain and restrictions in the deep water.

With hopes to move closer to the water, Borders aims to own his own boat and scuba shop.

As he continues to pursue his dreams, the Gary Sinise Foundation looks forward to building him a specially adapted smart home to ease his daily struggles and mobility needs around the house.