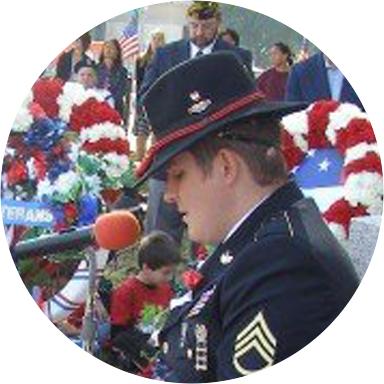 Retired U.S. Army Staff Sergeant Jay Fondren was born in Corsicana, Texas. He grew up spending a lot of time with both his parents and grandparents. His grandfather, was a retired U.S. Air Force Master Sergeant and taught Jay to love his country. Jay’s grandmother, instilled the importance of family values along with the responsibility he held for his brothers and sisters being the oldest sibling.

Faith was important to Jay even as a child. He attended church regularly with his family. He also was very active in sports and played baseball, basketball, and soccer. He excelled at soccer and even made it into Olympic development programs. As he got older soccer remained a passion of his and he refereed games in youth leagues. Jay played two seasons while attending Dallas Baptist University.

While attending college, Jay majored in computer information management. Like many young adults, Jay began to question his purpose and felt a gap was created between the values his family taught him and his current life at the time.

Jay enlisted in the Army in January of 2000 and was initially shipped to Fort Sill, Oklahoma. There he learned loyalty, duty, respect, courage, and honor. The service quickly reminded Jay of the values his family had instilled upon him growing up. He had found his new home.

On November 24, 2004, Jay was severely injured by a roadside bomb while serving in Iraq. Both of his legs were blown off above the knee but Jay’s protective instincts kicked in. His initial concerns were for his fellow service members, but he soon learned that it was, in fact, himself who was in the most immediate need of medical care. After the attack, Jay was in a coma and was flown to Walter Reed Army Medical Center. When he woke up, his wife, sister, mother, and father were there to greet him, demonstrating the strong sense of family, the Fondren’s had always shown.

Jay currently works with Camp Hope in Houston, a faith-based residential treatment center for veterans. He has also worked with Legacy Outfitters, a faith-based organization that encourages men to be better husbands and fathers, as well as with the Cub Scouts.

Jay and his family previously lived in the Houston area, where life presented daily challenges for them. Narrow hallways and a bathroom presented significant obstacles. The Gary Sinise Foundation was honored to provide a specially adapted smart home for Jay, which has helped him in his daily life and provided him the chance to embark on a new chapter. Jay and Anne to continue to pay it forward by investing in their children as well as their community and the lives of other veterans.