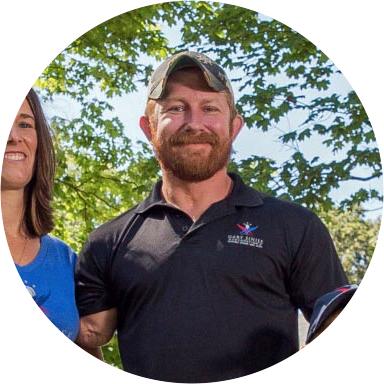 Retired U.S. Army Sergeant First Class Jared Bullock was profoundly affected by the attacks on September 11, 2001. Two years later, he and his twin brother enlisted in the Army together. After serving two tours in Iraq, Jared began training for Special Forces. He received a Green Beret and on October 13, 2013, Jared was deployed to Afghanistan on an A-team

Exactly one month later, while on a routine patrol, Jared’s ATV ran over an improvised explosive device (IED). The blast took the life of his best friend. Though Jared survived, he was severely injured. When he awoke in Germany, he was told he had lost his right arm above the elbow and his right leg above the knee. Once Jared was stable, he was flown to Brooke Army Medical Center in San Antonio, TX where he underwent 30 surgeries.

The Gary Sinise Foundation is honored to build Jared a specially adapted smart home in Illinos.