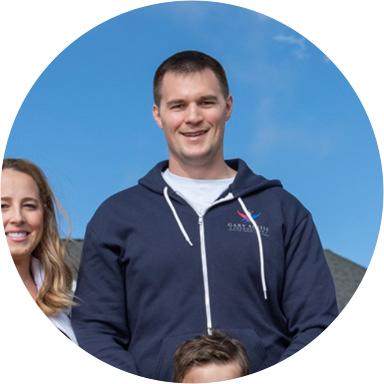 Retired U.S. Army Captain Jake Murphy spent his early years in Rye, New York and Wellesley, Massachusetts. One day Jake received a recruiting call from the lacrosse coach at the United States Military Academy and knew immediately it was his destiny. After graduating from West Point, Jake received his commission in to the Army as an Infantry Officer and deployed to Kandahar, Afghanistan as the executive officer of his platoon.

On July 23, 2011, while on a mission in the Regional Command South area, a pressure plate improvised explosive device (IED) detonated beneath Jake, immediately taking his left foot and causing an anoxic brain injury that put him in a coma. Jake was evacuated to Germany for treatment, where doctors informed his family Jake may never wake up. While in Germany, Jake’s right leg was amputated. Against all odds, Jake emerged from his coma four weeks later. He then was flown to Walter Reed National Military Medical Center where his left leg was amputated above the knee, leaving Jake a double amputee.

Jake has now learned to walk with prosthetic legs. The Gary Sinise Foundation was honored to provide a specially adapted smart home that has enabled Jake and his family to overcome this challenge and begin a new chapter.

"Our home has been wonderful thus far!

Unlike my previous house, the open concept of my forever home offers makes it so much easier for me get around, both in my prosthetics and when using my wheelchair. This alone results in more quality time being spent with my children as I can do what many able bodied individuals take for granted, like read them books from their bedrooms, playing with toys and making art.

The smart functions of our house also provide a level of both convenience and security that other homes do not. From the ability to control the lights throughout the entire home, even when I am in bed with my legs off, to setting the alarm system with my phone, there is a level of security that I feel that never existed before.

My appreciation for GSF and it’s donors’ generosity can not be properly put into words. What I can say though, is that it brings me great joy to know that my family and I can grow in a home that is perfect for my needs now and as I grow older.

Thank everyone that played a part in our home so so much!"