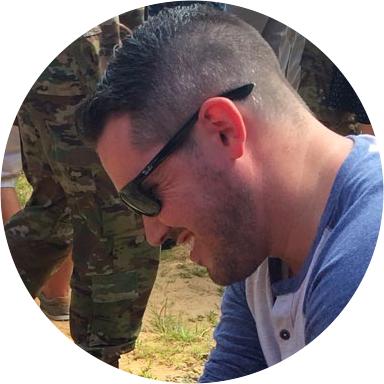 Retired U.S. Army Captain Greg Galeazzi grew up in Glastonbury, Connecticut, and was raised to have pride in his country. Greg’s father served in the Navy, and his three older brothers served in the Army. His family’s history in the military, along with the events of September 11, 2001, influenced his decision to join the Army. Greg was deployed to Kandahar, Afghanistan in the summer of 2010. Quickly into his deployment, he volunteered to take over a platoon who had lost their leader to a roadside bomb.

On May 26, 2011, Greg was heading back to base with his platoon after leading a foot patrol, when he was hit by an improvised explosive device (IED). Greg lost both of his legs and part of his right arm. His soldiers kept him alive while they waited 30 minutes for the MEDEVAC helicopter to arrive.

Greg woke up three days later at Brooke Army Medical Center in San Antonio. He underwent dozens of surgeries and endured many additional complications before he was able to live on his own.

Since moving into his specially adapted smart home, Greg has focused on raising his family with his wife, Jazmine. He continues to pursue his career as a medical doctor. Greg is grateful for the independence and opportunities the generosity of the American people and Gary Sinise Foundation have afforded him and his family.