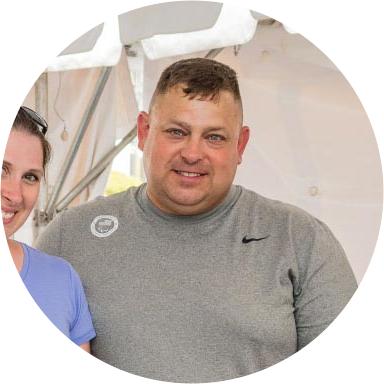 Retired U.S, Marine Corps Major Eric Burkett grew up in the military life. His father was a career Marine pilot, both of his grandfathers served in WWII and he can trace his paternal line all the way back to Jehu Burget who fought in the War for Independence.

Eric knew at a young age he was born to be a Marine, even after being told that he would not be accepted into the Marine Corps due to an “asthma-like” condition. At 22, he enlisted in the Army Reserve. He took classes in college and trained in many different military specialties, eventually earning the rank of Sergeant. Six years later he earned a commission in the Marine Corps and when on to be an Assault Pilot.

In April 2012, two weeks into his sixth deployment, Eric was flying an MV-22B as part of Operation African Lion. The plane suddenly went into an uncontrolled flight and crashed in Morocco. Eric suffered major lower limb, lung, and ocular nerve damage. His injuries eventually resulted in amputations of both of his legs; one above the knee and one below the knee.

The Gary Sinise Foundation was honored to have built Eric a specially adapted smart home in New Castle, PA.