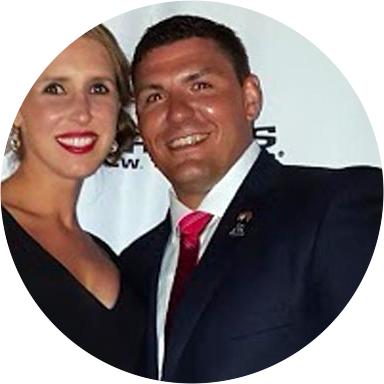 On September 11, 2001, while still in college, retired U.S. Marine Corps Corporal Chad Watson received a phone call from his dad asking if he saw what was happening in New York. Chad always knew he wanted to join the military after college, and the attack increased his desire to defend our nation. In 2004, he joined the United States Marine Corps.

On November 29, 2006, Chad was on deployment in Fallujah, Iraq. He was on a mission as an Infantry Team Leader when his vehicle was hit by an improvised explosive device (IED). Because of the blast, Chad lost his right leg above the knee and suffered many severe injuries.

Chad spent the following 22 months going through multiple surgeries and intense recovery at both Bethesda Naval Hospital and Walter Reed National Military Medical Center. Throughout this time, he was supported by his family.

Just three short months after the blast, Chad was rapidly recovering and even was able to snowboard. In the spring of 2016, Chad graduated with his MBA from Notre Dame and accepted a position with Medtronic Spine and Biologics. His job requires frequent walking, which causes stress on his left leg if using his prosthetic for long periods.

The Gary Sinise Foundation was honored to provide Chad and his family a specially adapted smart home that has eased his daily pain and provided a safe place where he can live comfortably and independently.