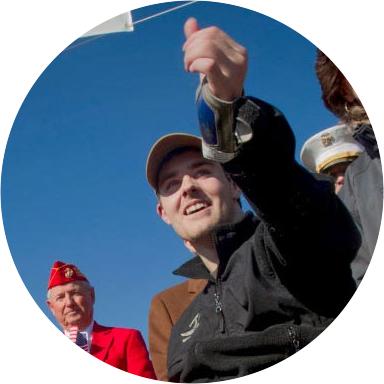 Retired U.S. Marine Corps Sergeant Ben Tomlinson is from Jacksonville, Alabama, and joined the military as a Reconnaissance Marine. While deployed to Afghanistan in 2009, he was injured by mortar shrapnel that struck a nearby building. After recovering, he was eager to return to his unit.

Ben deployed again to Afghanistan in November 2010. As troops searched buildings for bomb-making materials, Ben was overseeing rooftop security. Suddenly, a shot rang out and Ben was struck through the neck. The bullet traveled around his spine, and into his chest before exiting his shoulder. When Ben’s crew came to help, they immediately saw his lips turning blue. His lung had been severely punctured and he was gasping for air. Ben was rushed from the area by helicopter. His injury left him paralyzed and unable to walk.

Ben returned back to his hometown and was overwhelmed by the support. His community remained his inspiration throughout rehabilitation. Ben currently lives in his custom specially adapted smart home in Jacksonville.