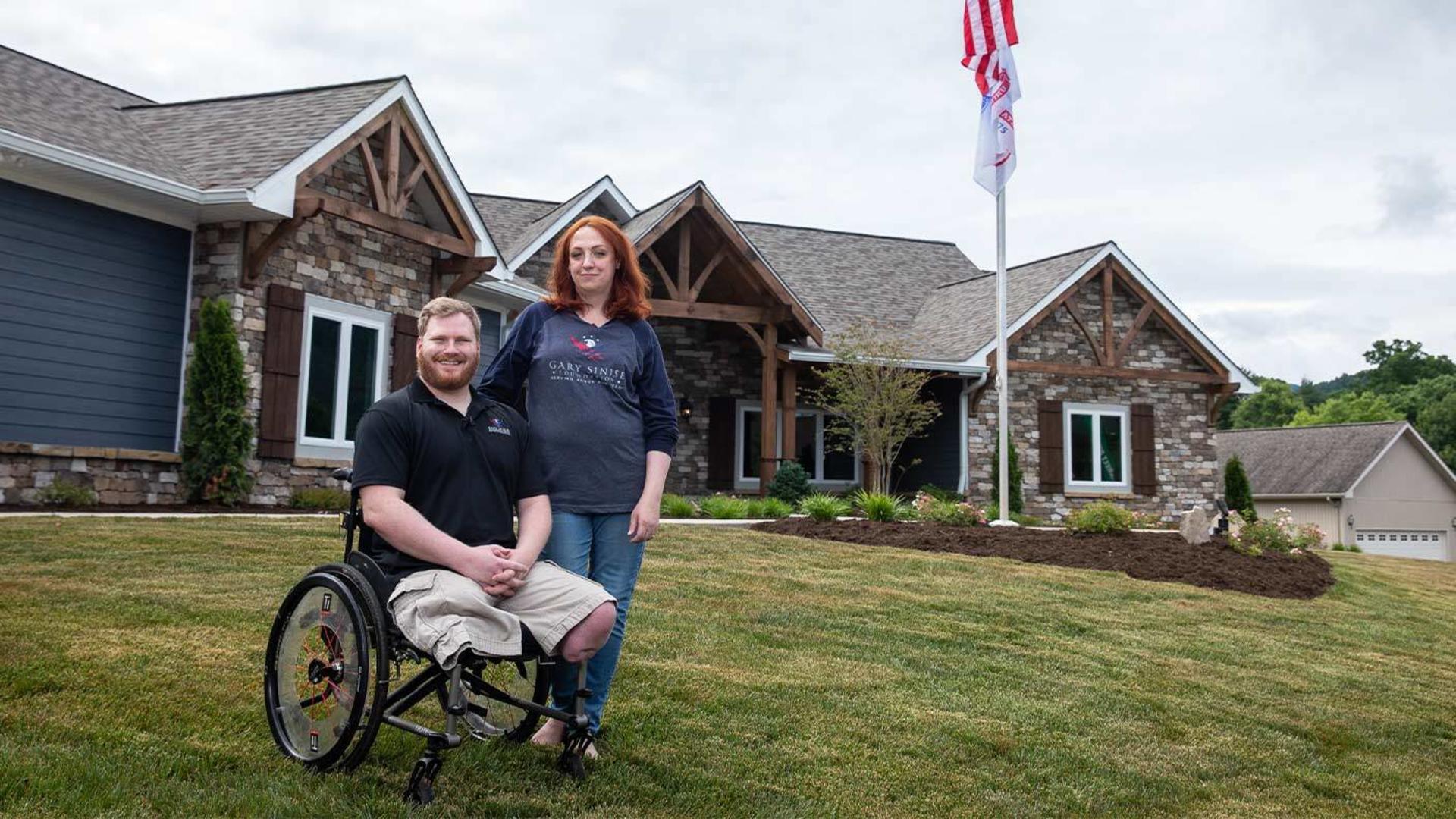 The feeling comes over him in the bathroom while he showers. It’s how he feels in the kitchen cooking alongside his wife, Shannon. And it’s why he feels at peace when he looks out any one of the windows and sees the natural beauty and mystique of the Great Smoky Mountains a stone’s throw away. The home uniquely accommodates his mobility and lifestyle needs.

The Indiana native endured nearly three years of intensive rehabilitation and physical therapy at Walter Reed National Military Medical Center in Maryland. Midway through a nine-month deployment in Afghanistan in 2013, he stepped on an improvised explosive device (IED); damage from the blast required amputation below his left knee and above the right. His pinky and ring finger on his left hand were also amputated.

Jones grew up in Sharpsville, a rural town surrounded by fields of gold corn and amber wheat. At last census count, its population was less than a thousand. Driving an hour south to Indianapolis, “the big city,” was a treat he remembers.

For all his academic and athletic achievements at Tri-Central High School, Jones got to college in 2006 and found himself going through the motions. He wasn’t the same motivated student as he once was. The summer after his freshman year, he put his studies on hold, opting, instead, to use the time to figure out what he wanted to do in life.

The summer months stretched into the fall by the time he sat down inside an Army recruiting office, enthralled by the idea of becoming an explosive ordnance disposal (EOD) specialist. “Working with explosives is always fun,” he remembers thinking. “I just dove right in.”

Jones arrived in Kandahar, Afghanistan, in October 2012. The frigid winter months decreased the tempo of U.S. and coalition military operations against the Taliban until the warmer months arrived. Patrols, therefore, were mostly ho-hum in the months leading up to the following April. “We’d do regular patrols just talking with the locals, try and keep regular routes clear [from buried explosives], working with the Afghan National Army.” It was pretty boring, he said.

By May, warm weather had given way to triple-digit heat. Requests for EOD support from troops in the field progressively escalated. The fighting season had arrived.

“A sister company was on patrol, and they were just doing a regular patrol going down a road they went hundreds of times, and the frontman hits an IED, and the guy right behind him takes damage,” Jones recalls of the events on May 14. A second IED blew when a medic ran up the road towards the injured men.

The platoon dispatched an EOD team, and while they were processing the scene, a third IED detonated. “From there,” Jones said, “it was pretty much mayhem.”

Among the casualties was Jeffrey Baker. The 29-year-old sergeant first class from California was the EOD company’s first loss, said Jones. Baker volunteered to take the spot of a team leader who injured himself in a motorcycle accident right before the deployment. “He was a really good guy.”

Two days later, Jones and his platoon were sent to secure a deserted Taliban village in the same area where Baker and two other men had been killed. As they maneuvered around the courtyard, a loud explosion made them duck for cover. As the dirt began settling and debris cleared, Staff Sergeant Casey Jones was lying flat on his back, in a pool of blood, flesh strewn on the floor.

“I looked down at my legs, and they were gone,” he said. The platoon’s medic administered a dose of ketamine for his pain; he passed out moments later.

The application process for a R.I.S.E. specially adapted smart home takes one and a half to two years, according to Matthew Marquez, who oversees the program for the Gary Sinise Foundation. Applicants go through an exhaustive vetting process, including a background check, a daylong interview, and an in-home visit from Marquez. Not every applicant has a squeaky clean history.

What transpired just after 1:30 a.m. on November 7, 2018, nearly derailed construction of Jones’ specially adapted smart home. Only a year before was he accepted into the R.I.S.E. program. Floor plans were already drawn up, and the land was purchased.

Like a train picking up speed, so too was the dilapidated state of his mental health. Months of feeling frustrated by an inability to perform simple functions with his hands or wearing prosthetics progressed into depression. The weight of his feelings wore him down. Five years after his injury, Jones was ready to kill himself. “I went upstairs, loaded the gun, and I was about to do it, and then I saw Shannon standing in the hallway.”

Instead of his head, he emptied each of his pistols by firing into the ceiling and wall. “I just wanted to get rid of the rounds so I couldn’t hurt myself with them.” One of the bullets struck a neighbor’s home. Four felony charges were brought against him for reckless endangerment involving a deadly weapon.

Before taking a plea deal that included serving two years of probation, Jones enrolled in a treatment center for post-traumatic stress disorder. A year later he was diagnosed with PTSD. Since the incident, he sees a therapist once a month and takes prescription medication to balance his mood.

The demonstrated progress Jones made in improving his mental health, and the concerted effort to continue to do so, explained Marquez, became the difference between rejecting the R.I.S.E. application outright and breaking ground on the home.

While living in a two-story home in Knoxville, the kitchen's limitations, for one, weren't spacious enough for Casey and Shannon to cook together. His wheelchair blocked access to the fridge. The countertop was uncomfortably high, as were the cupboards. He resigned to adapt to the home’s limitations: having to crawl on his amputated limbs, like a bear, up or down the stairs when he wasn’t wearing prosthetics.

In their new home in Sevierville, wider doorways enable him to move freely about on hardwood and tile floors. The stovetop, oven, and other appliances are purposefully located at his shoulder level. Shelves pull down low enough for him to reach. And there is ample room in the kitchen for him and Shannon to cook together.

Notably, the spacious bathroom has a built-in bench with grab bars for Jones to transfer into and out of the shower area from his wheelchair. The ease and comfort of showering are in stark contrast to the previous setup. 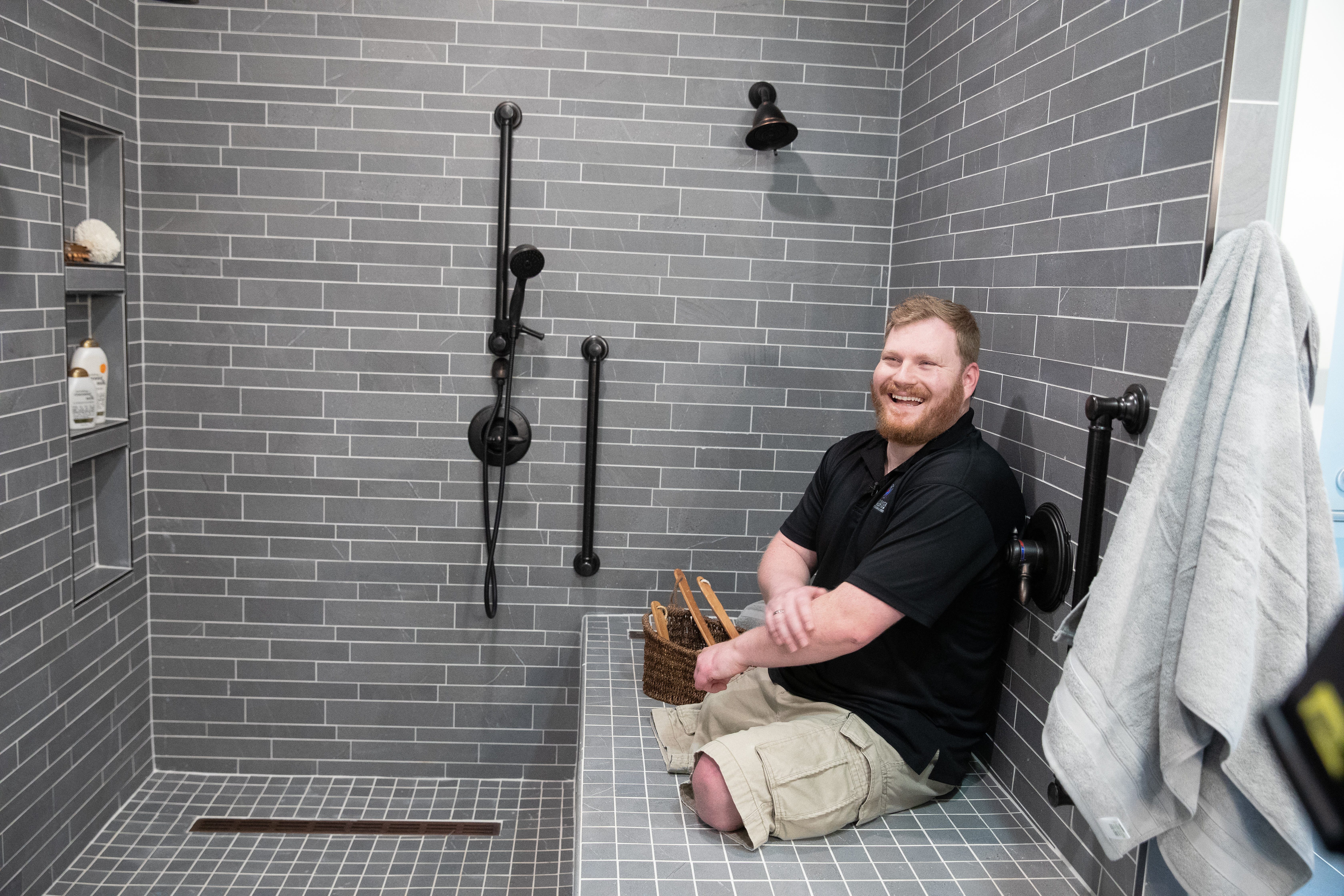 For all the tangible differences inside the home and the independence it has brought him, there is an intangible, therapeutic presence whenever he looks out the window or takes a drive through the most visited national park in the country.

“You go through the national park with the windows down, and you get that fresh air, and just the smell of nature, and it really is calming and soothing. It changes your perspective...you go through the mountains, and you’re just another person again.”

Said Shannon, “Even with prosthetics and wheelchairs and even with the whole R.I.S.E. home, life never completely goes back to what it was pre-injury, but it’s kinda shocking to actually be in the house and see how much has actually changed. Things are a lot easier for him to do, and I think he doesn’t get quite stressed out as much as he used to. And he’s just happier — so much happier.”

The home, she said, “Gives him a feeling that he can take part in life again. It’s not just a house. It’s a whole lifestyle change.”

The home adapts to him.