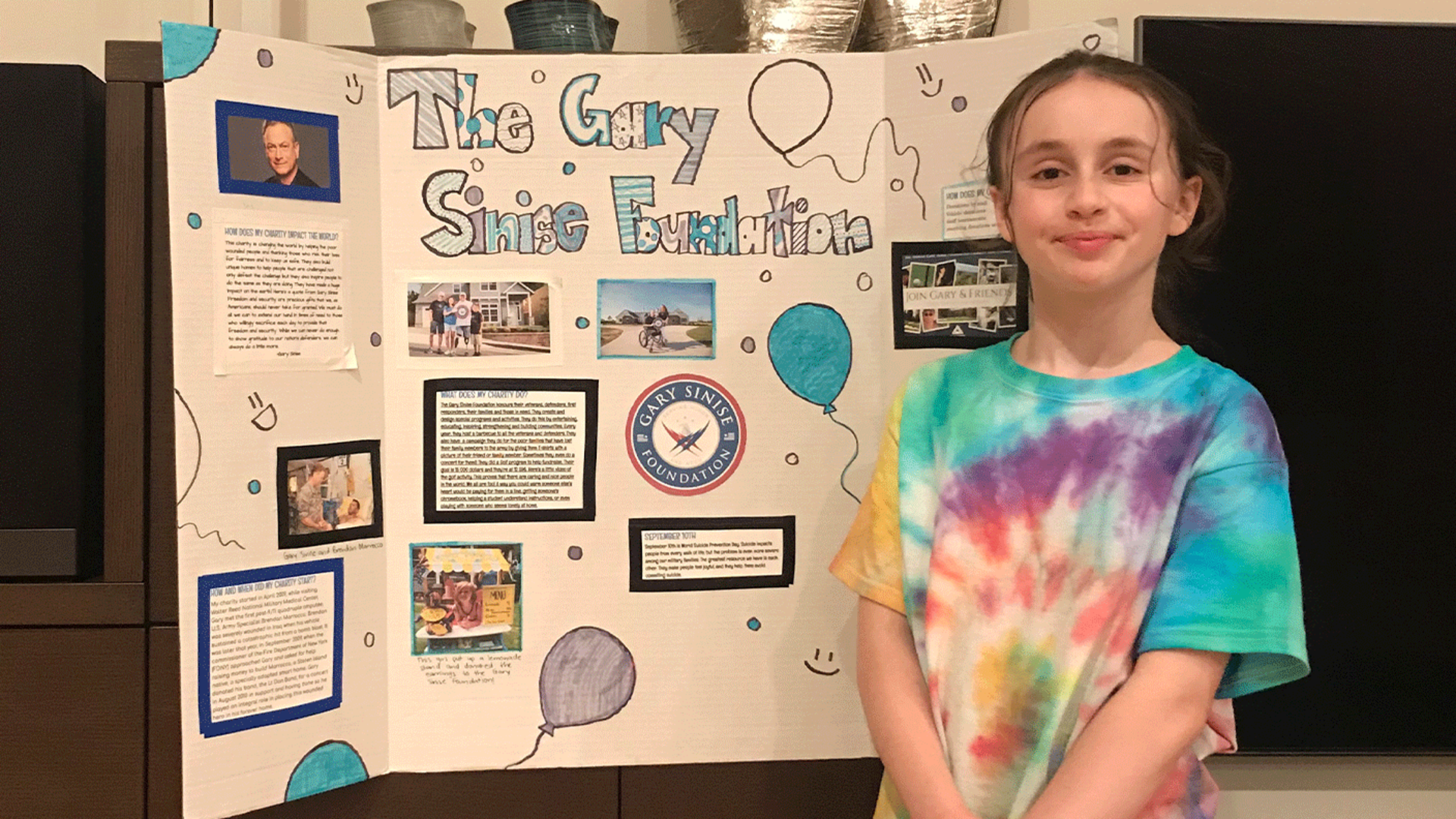 On the afternoon of Tuesday, May 5, Erin Tsafnat spoke to her fifth grade classmates from Leo Baeck Day School about the nonprofit she had spent months researching for her year-end project.

From the comfort of her bedroom and by Zoom, the assertive 11-year-old bucked the script she had written for herself days before the presentation. She didn’t need talking points or even index cards to keep herself organized.

"To be honest, I don’t think I followed my speech,” she said retrospectively. Erin chose instead to rely on memory and the tri-fold display board she had artfully crafted.

Her words came naturally, as fluent as her mastery of the material. She didn’t realize it then, but she was speaking from the heart. "It was more out of the box and more touching and more of my own thing.”

"Seeing people give back and thanking those who risked their lives and sacrificed them, I just knew I wanted to do it,” Erin said about picking the Gary Sinise Foundation as her nonprofit of choice for Project Give Back. "It was just right for me.”

In the 2019-2020 school year, students in grades four and five from 30 public and private schools in the province of Ontario, Canada, participated in Project Give Back. The program has been around since 2007, with classes held for an hour each week between October and May.

The curriculum is grounded in philanthropy and civics, with students learning tangible skills including research and writing, and public speaking explained Project Give Back teacher, Lucy Saltzman, who taught Erin and her class this year.

Students are empowered at the outset to choose a charity that they can identify with, and that stokes their passion, Saltzman said.

For Erin, choosing the Gary Sinise Foundation wasn’t by happenstance. "The best things that match me are things that most touch me on the inside,” she said.

Scrolling through the foundation’s website and watching videos showing injured veterans and their families during R.I.S.E. home dedications, children and Gold-Star families participating in Snowball Express at Walt Disney World Resort, and seeing disabled veterans supported by Sinise, were ample sources of inspiration for her.

"The more I learned, the more I wanted to learn.”

But it was the relationship between the foundation and the military that resonated most with Erin, whose father had served in the Israeli Army.

The Gary Sinise Foundation, as she learned during the school year, conducts the majority of its mission within the United States, and not, say, in Canada. Yet this fact was immaterial to her, "I just thought that what they do matters; not where they are.”

Erin heeded the advice of her primary teacher, Jody Kimelman (also a volunteer with Project Give Back), by decorating her display board with photos taken of Sinise and from past foundation events and fundraisers. Smiley faces, bubbles, and glitter were drawn and sprinkled in between her answers to each of the prompts.

In her artistic expression — and with creative metaphor — she drew balloons to represent, "how my respect [for the military], and how all of our respect, and how thankful we are which goes, up, up, and up.”

More to the point, "It’s like letting go of a balloon, it keeps going higher and higher.”

What struck Saltzman during the presentation was how "passionate and honest” Erin’s words were and the place they were coming from, "She speaks from the heart.”

For all of her research, Erin was surprised to learn that concerts put on by Gary and the Lt. Dan Band at military bases are free for service members and their families.

She was especially moved by Sinise’s experience while visiting Brendan Marrocco — the first surviving quadruple amputee who sustained injuries from a roadside bomb in Iraq — at Walter Reed National Military Medical Center in 2009.

"At that point, I already knew that Gary Sinise is an amazing person,” she said, "but at that moment, I just felt that he is a billion times more amazing for everything.”

One of the last lessons students are taught during Project Give Back is on Rambam’s Ladder. The eight-step model of charitable giving is taken from the teachings of Rabbi Moses ben Maimon, otherwise known as Maimonides. The lowest rung on the ladder represents "reluctance” or giving begrudgingly while the highest step on the ladder represents "responsibility” or self-reliance.

To Erin, identifying which step on Rambam’s Ladder Gary Sinise applies to, she reasoned that what he stands for and why he has spent decades dedicating his time and efforts into causes close to his heart is because "He is doing it to heal others and that is what is on the highest level of Rambam’s Ladder.”

"It’s not about doing it for yourself but to do it for others.”

One week after her presentation, she mailed a letter addressed to the Gary Sinise Foundation. In it, she explained what Project Give Back is, why she chose the foundation, and what she learned about herself and the depths of her gratitude for those who wear the many uniforms of service.

"Before doing research on the Gary Sinise Foundation,” she said introspectively, "I thought heroes were like Superman, Superwoman, Wonder Woman, then after I realized that most of our heroes are the ones that are standing right beside us like the nurses and doctors and Gary Sinise.”

If she ever has the opportunity to stand beside Gary Sinise, Erin said she would "give him a big hug and tell him how grateful I am that he started the foundation.”

Like her presentation, Erin’s feelings come straight from the heart.