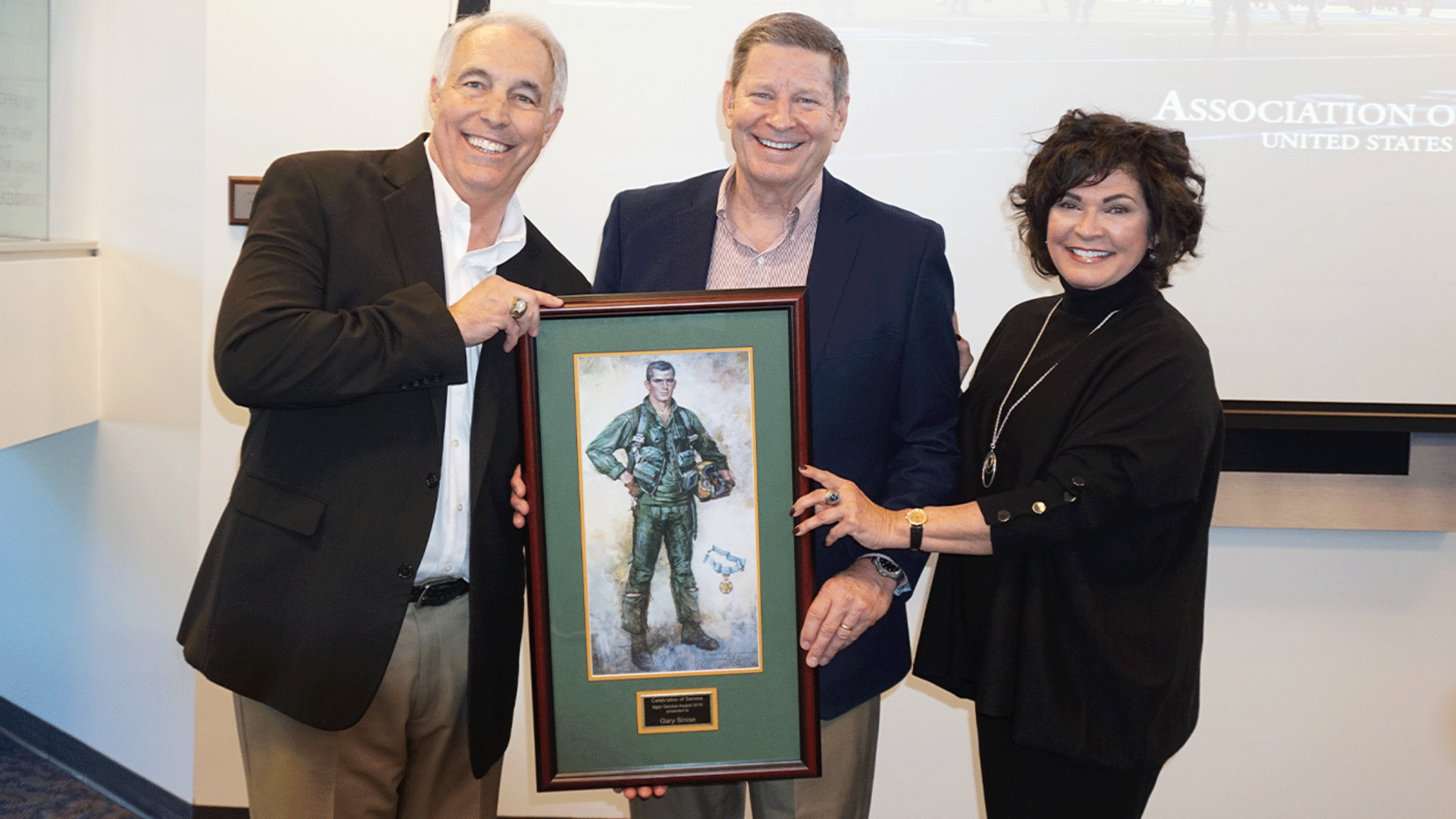 ​On Saturday, November 2, Gary Sinise became the first civilian and non-Air Force Academy graduate to receive the Sijan Service Award given to an individual whose actions of service and sacrifice demonstrate the same spirit and character as that of United States Air Force Captain and Medal of Honor recipient, Lance Sijan.

While regretfully unable to attend the award ceremony and weekend festivities that coincided with the inter-service academy football game which saw Air Force defeat the Black Knights of the United States Military Academy 17-13, Gary sent a recorded video message of thanks and gratitude ahead of time which played at one point during the ceremony.

“Lance Sijan was a great, great American, an inspirational American for what he went through,” said Gary. “He inspires me so much at this moment with some of the challenges that our family is facing right now, personally trying to carry the load and taking care of so many personal things right now.”

“I look at what he went through and the difficulty, the challenges and everything he faced — and the way he faced it with such courage and strength and determination and will — he inspires me so much. It’s a great privilege to receive this award in his name.”

Mark Twain once wrote: The two most important days in your life are the day you are born, and the day you find out why.

The story of the Sijan Service Award contains within it another story that is revered by United States Airmen past and present.

It’s a story that exemplifies the highest qualities of a leader devoted to serving others and the ideals of a nation.

And it’s a story of fortitude in the direst of circumstances which underlie the significance of the award given to Gary and to Twain’s point, the answer to why.

During an ill-fated mission over Laos on November 9, 1967, to attack the strategic target of Ban Loboy Ford along the Ho Chi Minh Trail, the F-4 Phantom the then First Lt. Sijan and Lt. Colonel John Armstrong were flying was struck by the blast from the bombs they had dropped over target; caused by a faulty fuze which led to the premature mid-air explosion seconds after the bombs were released.

While Lt. Colonel Armstrong was presumed to have been killed in action by the blast, Sijan was able to eject from the aircraft.

The severity of his injuries was staggering after he awoke from his concussion on the jagged limestone floor, engulfed in the triple canopy rainforest.

His right hand was mangled.

His skull was fractured.

He had a double compound fracture to his left leg below the knee, the bones protruding through the skin.

Yet far more suffering awaited him.

Upon ejecting from his aircraft and radioing for help, a rescue attempt was made when a helicopter, with close air support, was dispatched to retrieve the downed airman. For 33 agonizing minutes, the helicopter hovered overhead near Lance’s position, taking fire from enemy troops all around, while trying in vain to get him out of harm’s way and returned safely home.

It was a selfless act which sealed his fate, Sijan radioed to the rescue helicopter, “Negative. I’m surrounded by the enemy. I’ll call you.”

At the risk of losing more American service members, Sijan called off the rescue attempt because of too many enemies in the area.

In the 46 consecutive days it took for his eventual capture, Sijan endured a punishing ordeal of survival as he dragged himself backward over the sharp, rainforest floor. His skin shredding down to mere fibers until nearly all was lost.

He was depleted of vital nutrients and water.

When the North Vietnamese found him passed out on the side of the road, they transported him in the ensuing days to Hỏa Lò Prison, better known as the Hanoi Hilton.

Lance, like so many other American pilots who were shot down and captured by enemy forces in Vietnam, endured unmerciful torture and interrogations, which caused unimaginable pain and suffering.

Yet his spirit and resilience never broke.

Despite becoming deathly ill and unfathomably underweight, Sijan upheld the military Code of Conduct, whose six articles layout the behavior and expectations incumbent upon an American service member being taken a prisoner of war (POW).

Chief among the articles is number five, which states: When questioned, should I become a prisoner of war, I am required to give name, rank, service number, and date of birth. I will evade answering further questions to the utmost of my ability. I will make no oral or written statements disloyal to my country and its allies or harmful to their cause.

Lance never wavered from his sense of duty and loyalty to his country. Even in the final moments of his life, when he passed away in January 1968, Sijan never broke his commitment nor oath.

As more and more returning POWs recounted Sijan’s harrowing story of survival and courage to Department of Defense officials and Air Force brass, it was on March 4, 1976, when President Gerald Ford awarded Captain Lance Sijan posthumously with the Medal of Honor.

To this day, no other Air Force Academy graduate has received the nation’s highest military award. The Sijan Service Award was conceived three years ago by Russ Laney, President of Home Field Advantage, and a Class of 1976 Academy graduate who, in conjunction with Janine Sijan-Rozina, the younger sister of Captain Lance Sijan, organized the award to coincide with its signature function, Celebration of Service.

In years past, the award has been given to recipients from the military and first responder community.

“This is an American who serves. Who has a parallel vision and mission as the Sijan Foundation,” said Sijan-Rozina describing why Gary Sinise was nominated and chosen as this year’s award recipient. 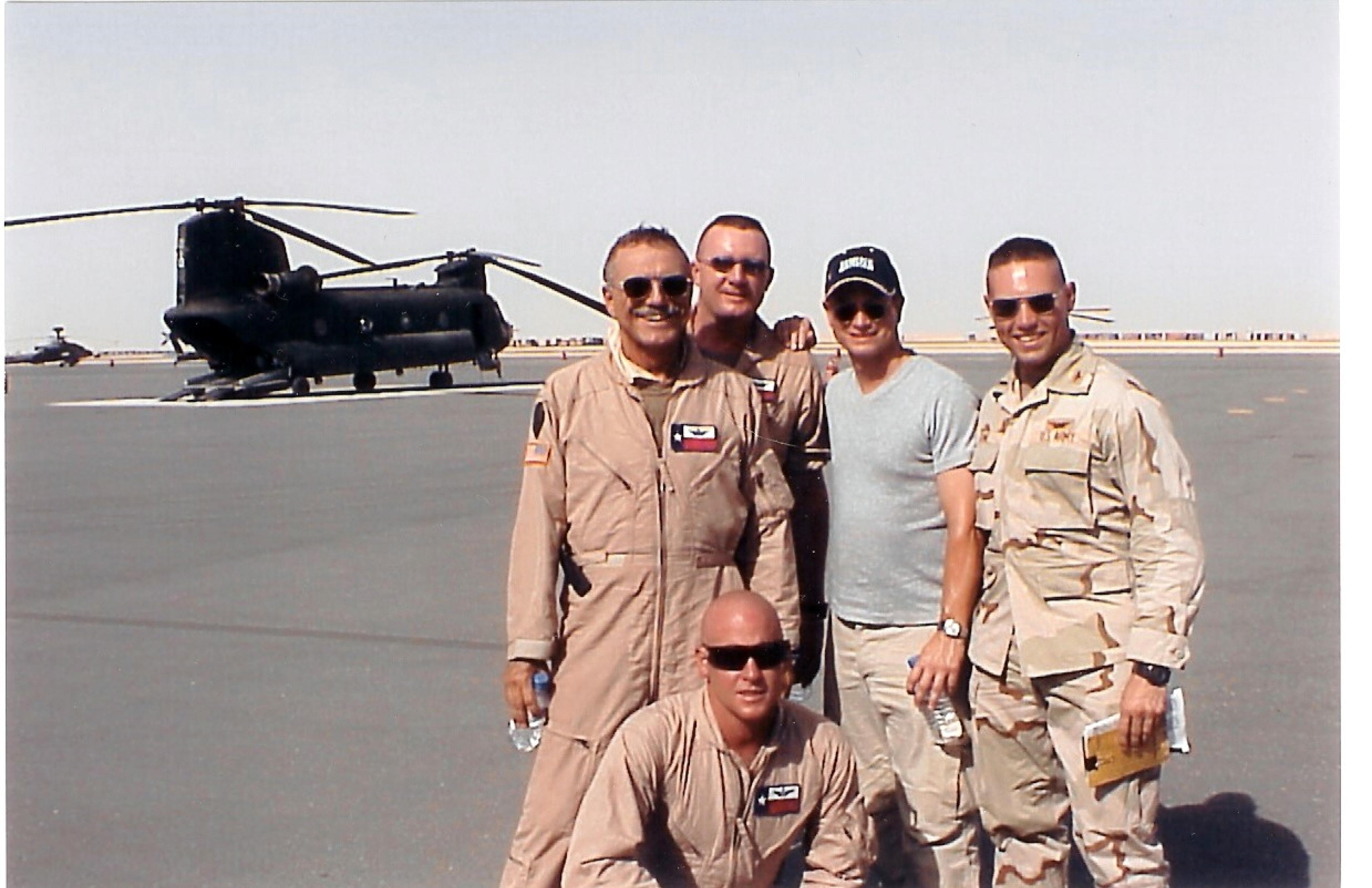 As the Gary Sinise Foundation became more and more established, and with the hiring of retired Air Force General, Robin Rand as its CEO in 2018, she said those factors, among many others, heightened her awareness of just how the Foundation was impacting the lives of those who serve, and have served our country in uniform.

​The Sijan Service Award was accepted on behalf of Gary by Robin Rand, a class of 1979 Academy graduate who brings a unique connection to the heroic airman.

Rand was among the 4,000 cadets who stood in formation for the dedication of Sijan Hall on May 31, 1976, of which Mr. and Mrs. Sijan were present. Having lived in Sijan Hall, Rand was humbled by the opportunity to speak alongside Janine Sijan-Rozina about her brother and the legacy he imparted on him and many other graduates of the Academy.

“I cannot think of a more deserving recipient for the Sijan Service Award than my friend Mr. Gary Sinise,” said Rand during the award ceremony inside Doolittle Hall on the grounds of the Air Force Academy. 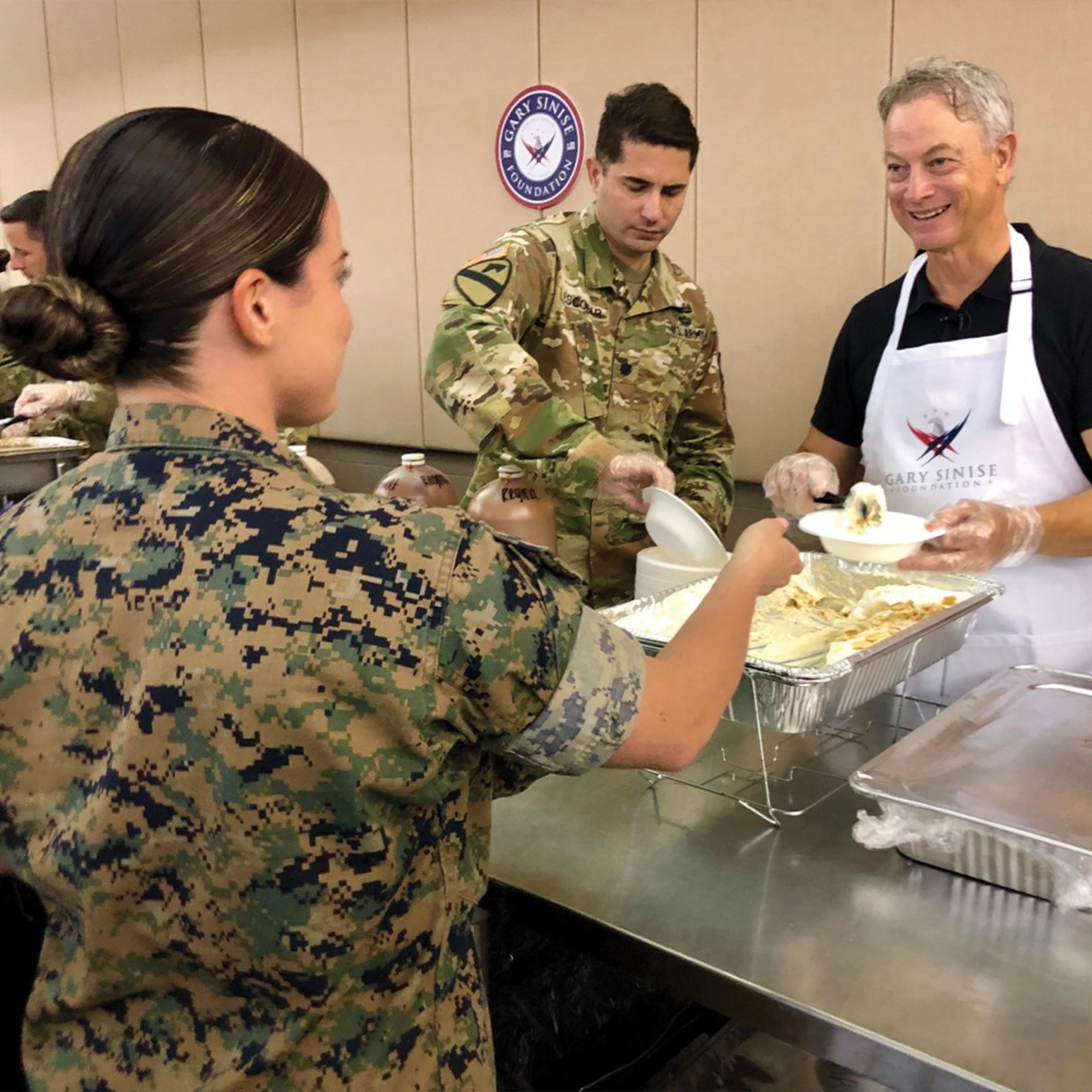 “Mr. Gary Sinise has turned his unconditional support to the men and women who serve us in the harshest of conditions and circumstances,” he said of Gary who, even before starting his namesake Foundation in 2011, was already serving and honoring the nation’s military men and women, veterans, first responders, and their families.

“To those of us who wear or wore our nation’s cloth, Gary is known for his selfless devotion to our nation’s defenders.”

Rand went on to say that for American service members who are carrying out their duty in oft-forgotten places around the world, Gary’s commitment to honoring them has left an indelible mark on their lives. 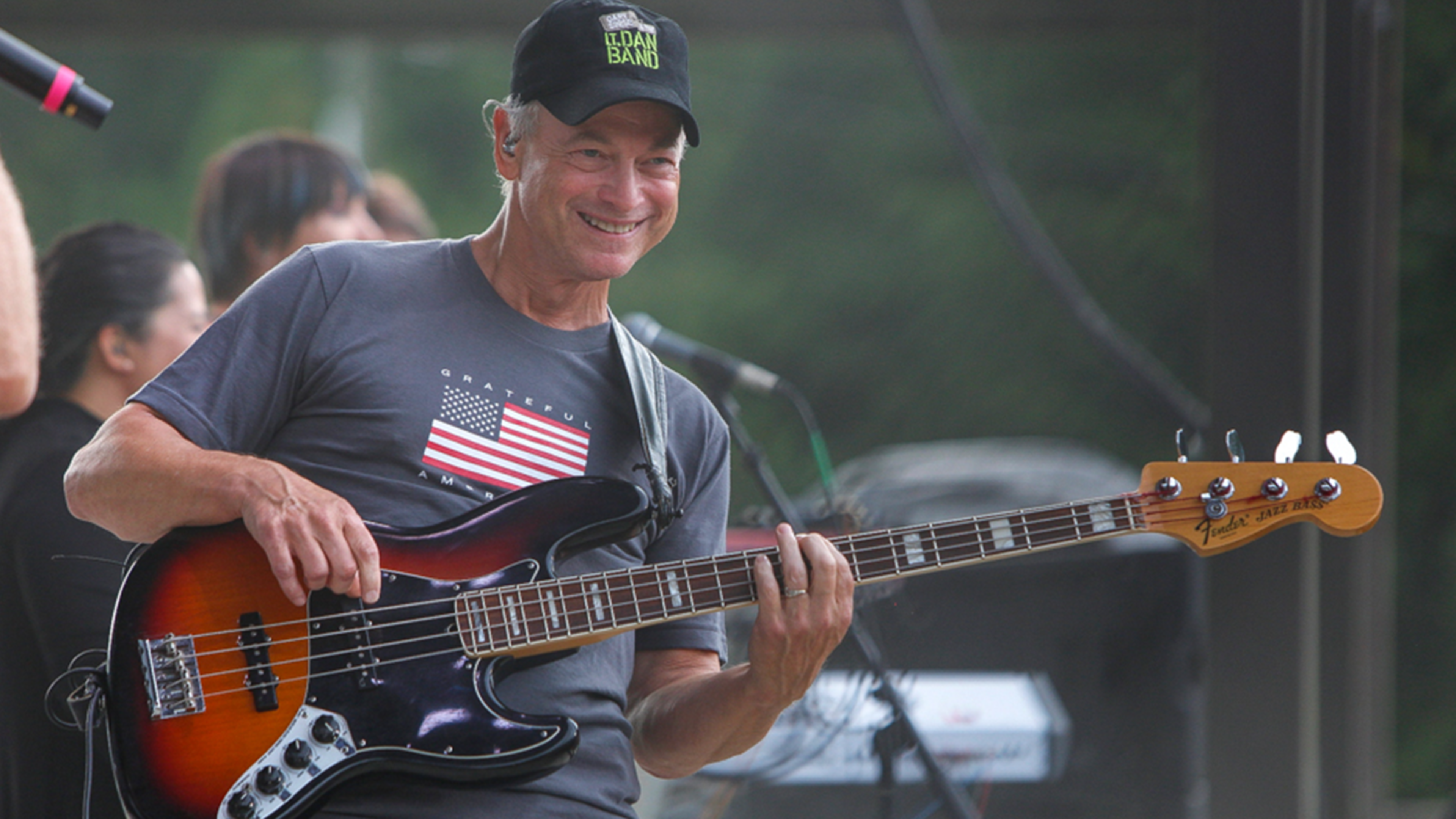 As Rand wrapped up his comments to the distinguished audience made up of past graduates of the Air Force Academy and the United States Military Academy, active duty and retired Air Force and Army officers including General David Goldfein, Chief of Staff of the U.S. Air Force, veterans, and others,  he echoed the words of America’s 16th President, Abraham Lincoln, who wrote:

Honor to the Soldier and Sailor everywhere who bravely bears his country’s cause. Honor, also, to the citizen who cares for his brothers in the field and serves, to the best he can, the same cause, for the common good.

For the common good, as President Lincoln penned in a letter in the midst of the American Civil War, is the bearing Lance Sijan and Gary Sinise have followed in their respective lives.

It’s the pathway Sijan followed through his years at the Air Force Academy and what was going through his mind as he fastened the harness in his F-4 Phantom aircraft before taking off into the skies over Laos on that fateful November day in 1967.

And it’s the same pathway Gary has taken in his journey from self to service.

It’s what each of them found out to be their second most important day.​