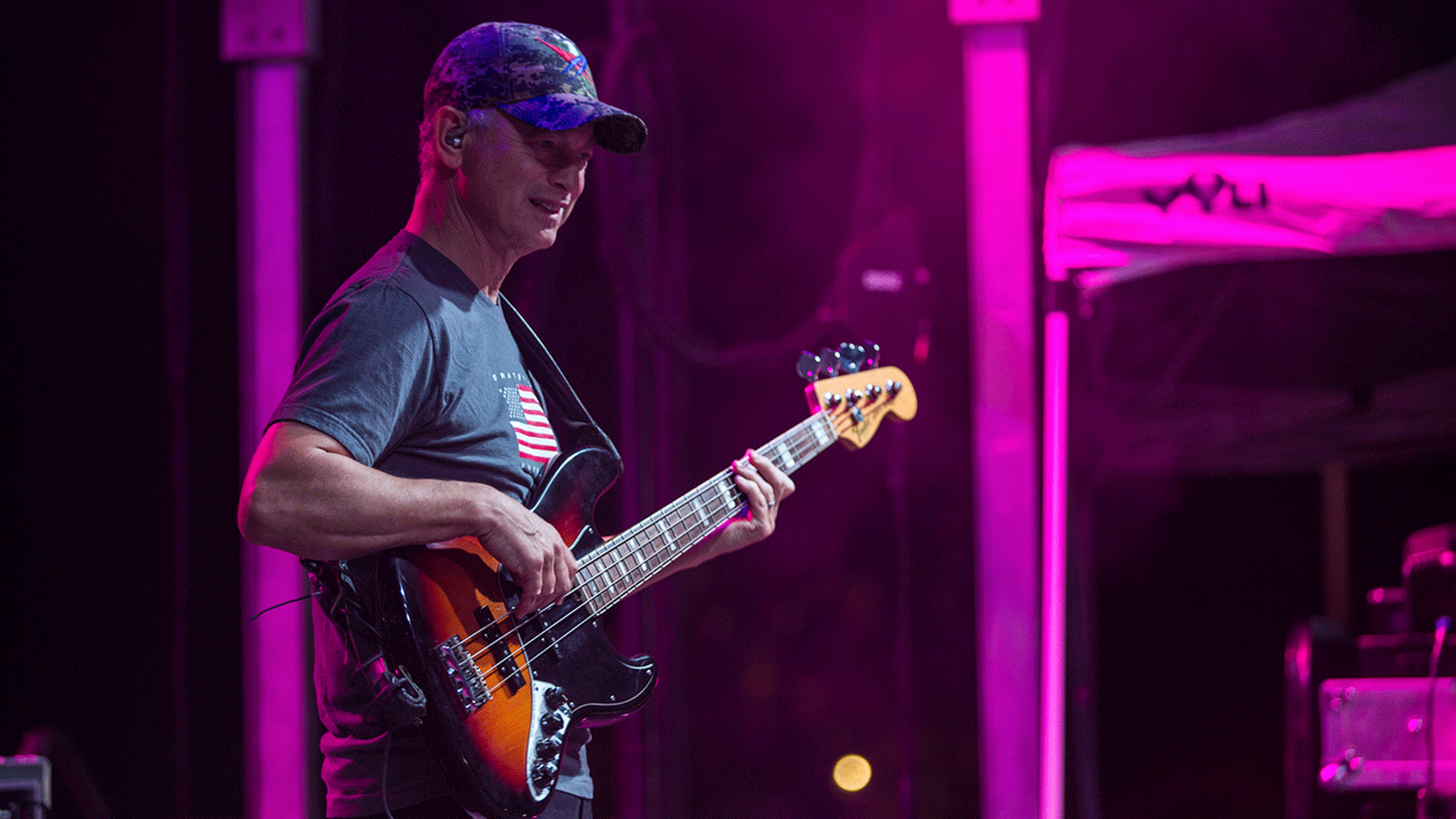 The Fall Carnival at U.S. Marine Corps Base Camp Pendleton in San Diego on Friday, September 13, went beyond expectations — and superstitions — than its original billing as a free event with family-friendly activities, food trucks, and a live performance by Gary Sinise and The Lt. Dan Band. To a lot of service members and their families in attendance, the festivities took on greater significance.

Some more so than others.

Dixon Brown was leaning over the waist-high fence while watching his six-year-old daughter, June, gently pet bunny rabbits and piglets while inside the petting zoo at Wire Mountain Baseball Fields at Camp Pendleton.

Brown, a Navy Corpsman attached to the 1st Marine Raider Battalion, U.S. Marine Corps Special Operations, wore a soft smile as June giggled to herself as she held a piglet in her arms.

He'll be deploying overseas early next year and said that the past nine months have been incredibly intense as he and his elite unit prepare for a six-month deployment.

Along with his wife, Courtney, and their two-year-old daughter who sat in a stroller, Brown was looking fatigued despite his upbeat demeanor.

“This week was just brutal. If it hadn’t been for this event, I would’ve just stayed home, and the kids would’ve wanted to do something, but I would’ve had no energy to do it.”

The young couple caught Gary and the Lt. Dan Band perform years earlier when they were stationed at Marine Corps Air Station Futenma in Okinawa, Japan in July 2013. They were thrilled to see him again.

“I love it,” said Courtney Brown about the band’s variety of popular songs performed. “You know all the songs and just dance,” she said with a smile across her face.

As the sun began to set from a cloudless sky to give way to a gorgeous evening, the cool breeze coming from the nearby Pacific Ocean, brought a refreshing chill to match the heat put out by the band as they played cover after cover to a dancing and hollering crowd. 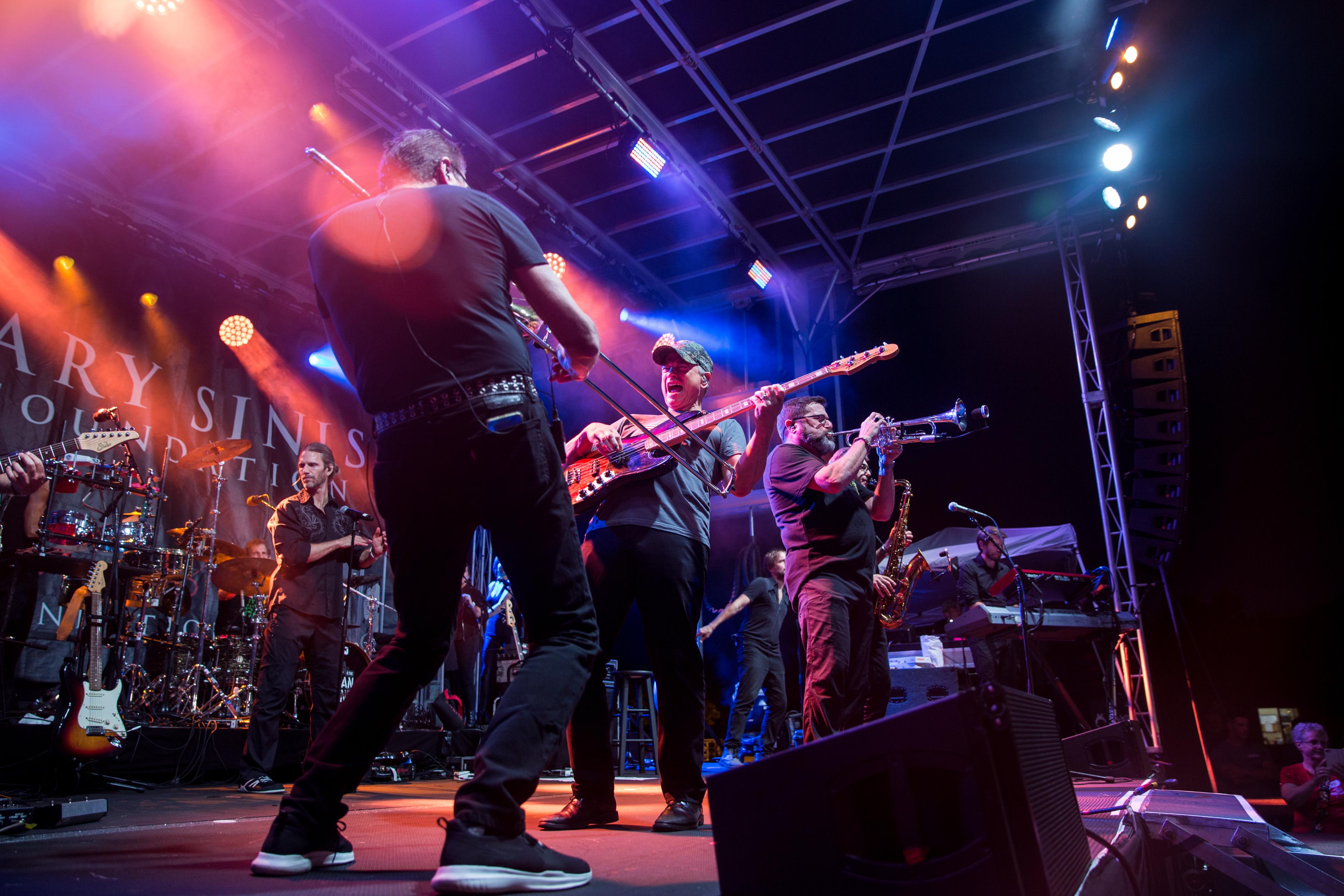 Illuminated by a full moon in the sky, Camp Pendleton was aglow as Gary and the Lt. Dan Band brought honor, gratitude and rock and roll to service member’s families and the base community.

Nearby, children laughed and screamed while riding bumper cars and other rides that were set up at the opposite end of the baseball fields.

Families took part in face paintings, sat in front of caricature artists to have their portraits taken, played corn hole and other family-friendly games. 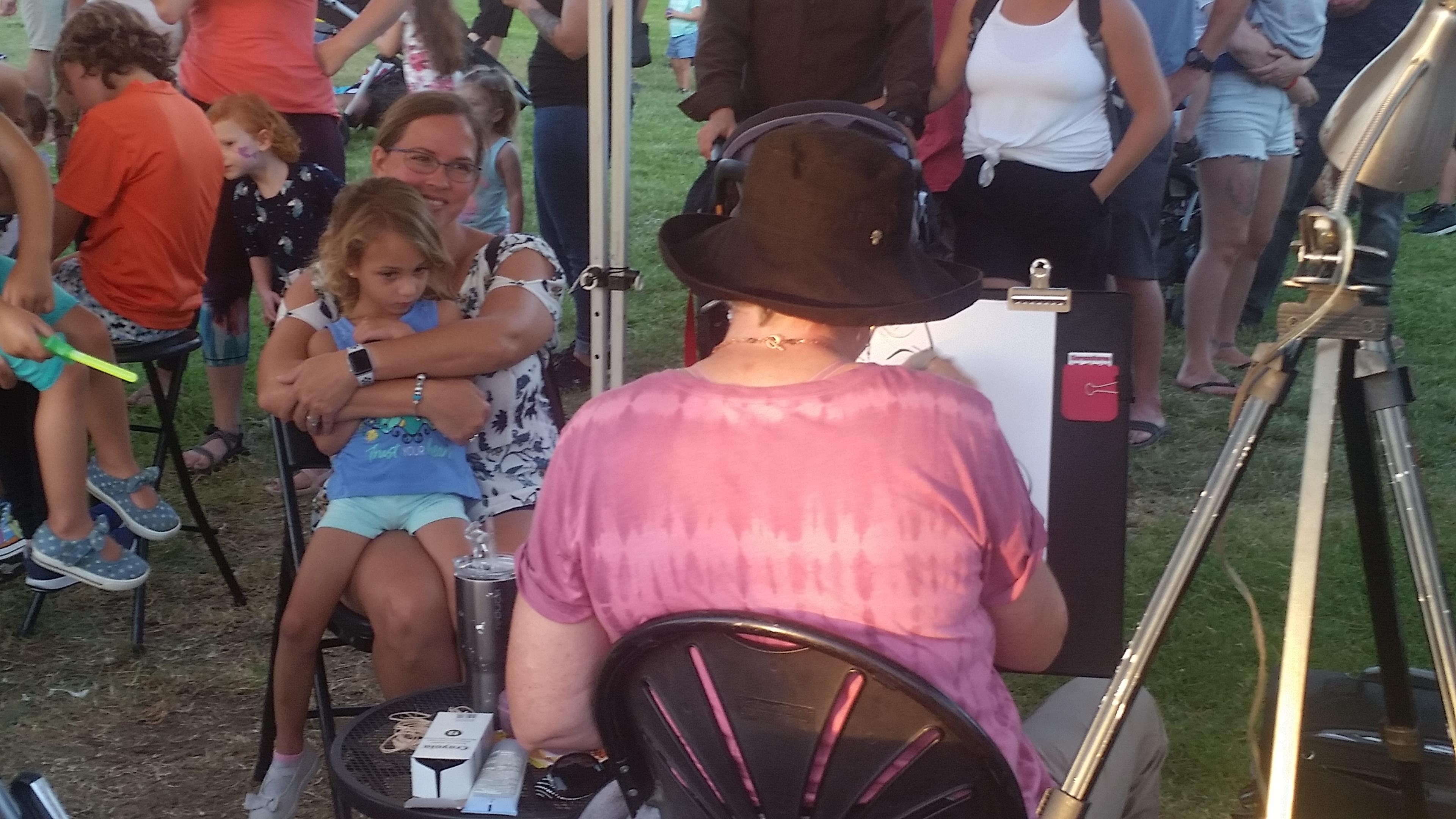 “Shaved ice, that’s the first thing they wanted,” chuckled Ariel, a Marine whose two young daughters insisted on stopping by the shaved ice stand first before walking around to play games, visit the petting zoo and ride the teacups attraction.

Ariel has twice been deployed to Camp Leatherneck in Afghanistan during his nearly 12 years of service in the Marine Corps. He says his combat experience exposed him to “a lot of things you don’t want to see and a lot of things people don’t need to see.”

“Having the music and everybody getting together, it’s a good time for families to get out here and listen to music and meet everyone else as well.” 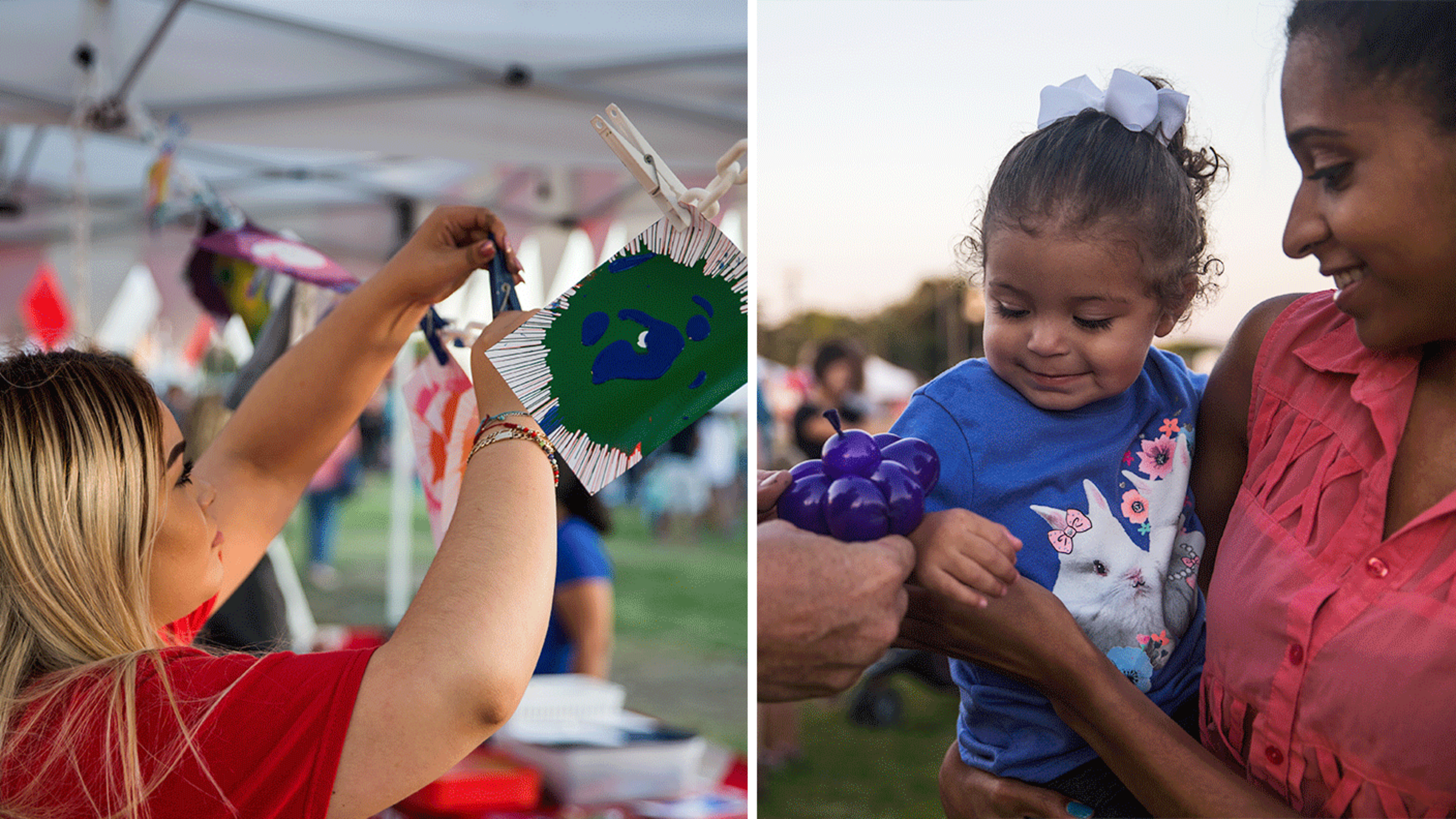 The concert was initially booked for February of this year but was canceled due to torrential rains that flooded the base. Coinciding with the Fall Carnival, the show couldn’t have come at a better time for the families and community of Camp Pendleton.

When the concert reached its midpoint, Gary took a moment to honor those in attendance who lost a spouse while serving their country in uniform.

His message of gratitude and remembrance struck a chord with Michelle Blish who lost her husband, Jeffrey Paton Blish, a U.S. Navy Special Warfare Combatant Craft Crewmen, in 2006.

The mother of three whose children have each participated in Snowball Express before and after it became a part of the Foundation in 2017, said, “We love, love, love, Gary Sinise and what he does for the military and families.”

While fighting back tears as she talked about her husband and his service in the Navy, Blish said about being a Gold Star spouse and a part of the Snowball Express community, “It feels like we’re not left behind. We have somewhere where we belong still, and our husbands are not forgotten.”

“Hearing the band they’re awesome,” she said about how much fun she has while watching the show and seeing Gary. “He always touches my heart, and I know his heart is all in.”

Gary also took a moment to honor those Vietnam veterans in attendance and explained how significant his portrayal of Lt. Dan Taylor in Forrest Gump had on his life’s journey from self to service. 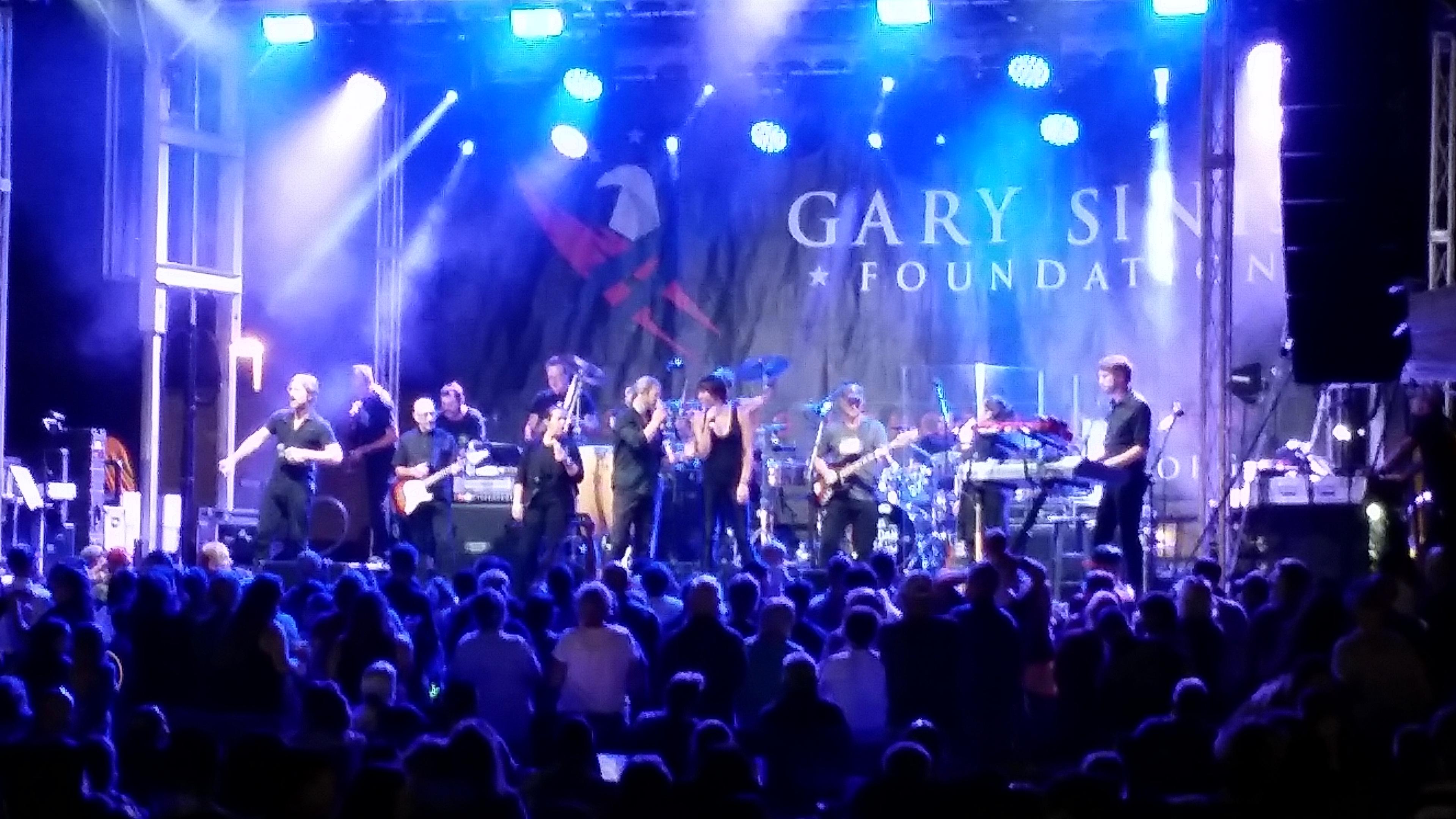 As the concert came to a conclusion just as the night’s sky was slowly being overrun by wispy clouds nearly obscuring the glow of the moon, Dixon Brown and his family made a final stop at the merchandise table to pick up a few mementos to remember the evening’s festivities.

While walking towards their car carrying Lt. Dan Band t-shirts and stickers, Dixon pushed the stroller as his youngest was fast asleep while Courtney held June’s hand.

Smiling at each other while holding back yawns, Dixon, aware that his time with his family is slowing drawing to a close, said in a sincere tone of voice, “things like this are a huge blessing for our family.”

The sentiment was shared that night by many other families and the Camp Pendleton community. 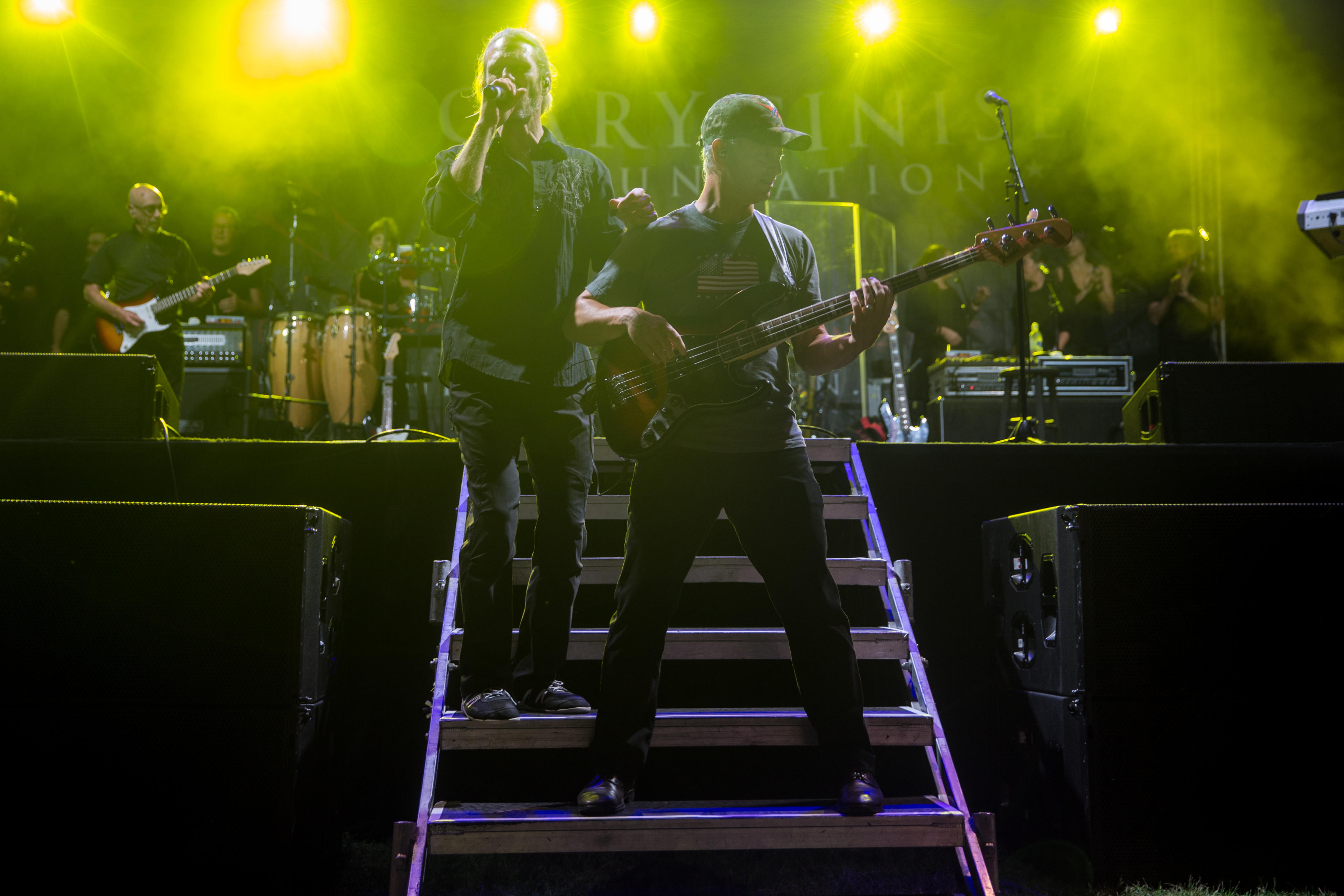