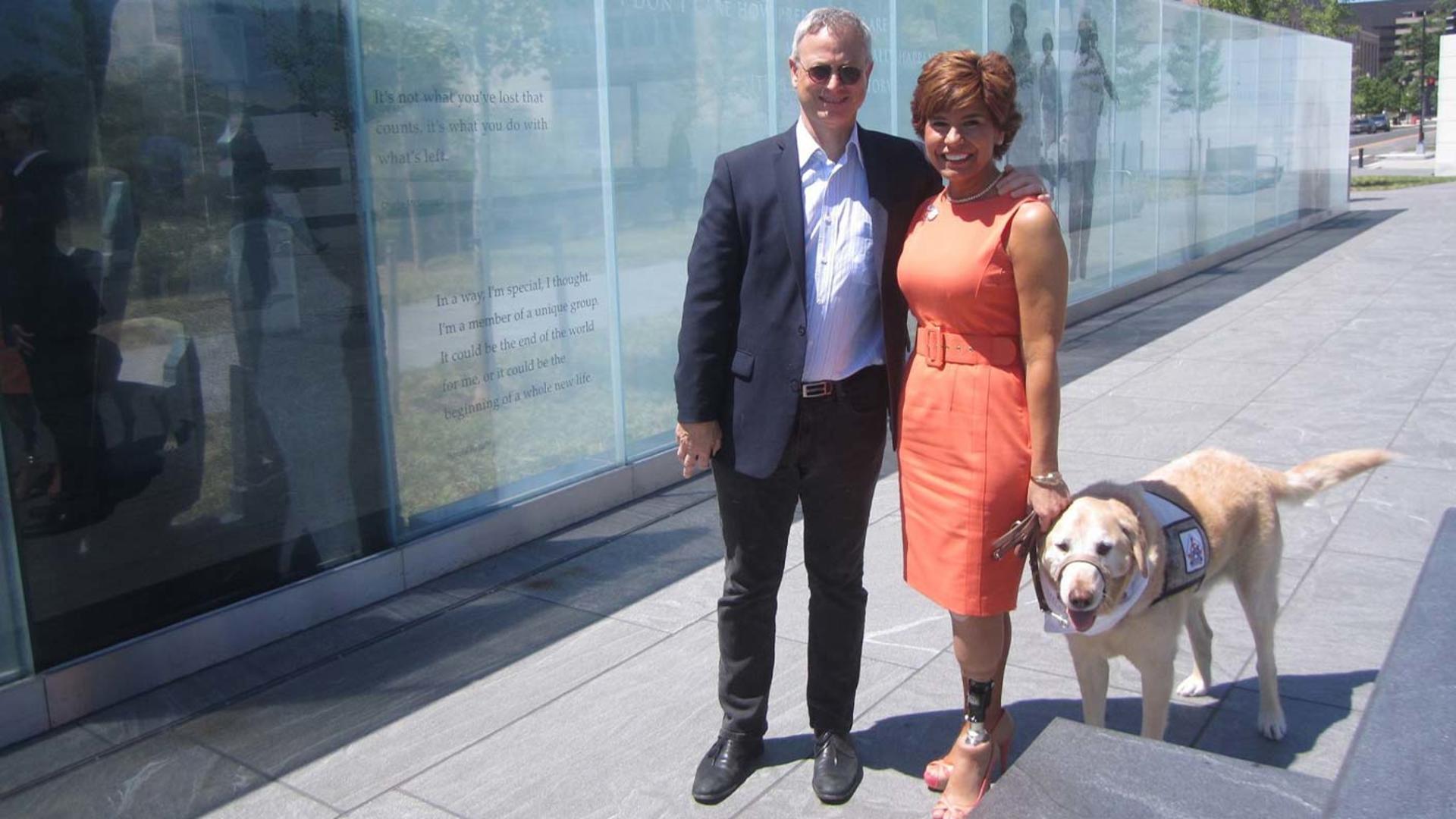 A week after the terrorist attacks on the Pentagon and World Trade Center on September 11, 2001, U.S. Army Captain Leslie Smith volunteered to deploy with her division from Fort Dix in New Jersey to Bosnia as part of Operation Joint Forge — a mission to support the NATO Stabilization Force in the former Socialist Federal Republic of Yugoslavia.

As a public affairs officer working with high-level officials, visiting dignitaries, celebrities, and military brass, Smith was less than a year into the deployment when fate abruptly stepped in.

The seemingly benign blood clot she had noticed that had formed in her left leg had been nothing more than an afterthought the first time she noticed it.

“Soldier on, and tough it out,” she would tell herself.

She wasn’t in pain at the time and didn’t notice any swelling. But as the months passed during the deployment, Smith slowly began to feel excruciating pain in her left leg to the point where she was nearly unable to walk.

Sitting inside the Commanding General’s office along with the brigade surgeon, the general, after having reviewed the ultrasound on her left leg, said to her, “Smith pack your bags, you’re out of here tonight.”

The general’s direct order ran counter to the Warrior Ethos — particularly placing the mission first and never quitting — ingrained in Smith from the moment she entered the U.S. Army as a Second Lieutenant through the R.O.T.C. program at Georgetown University. 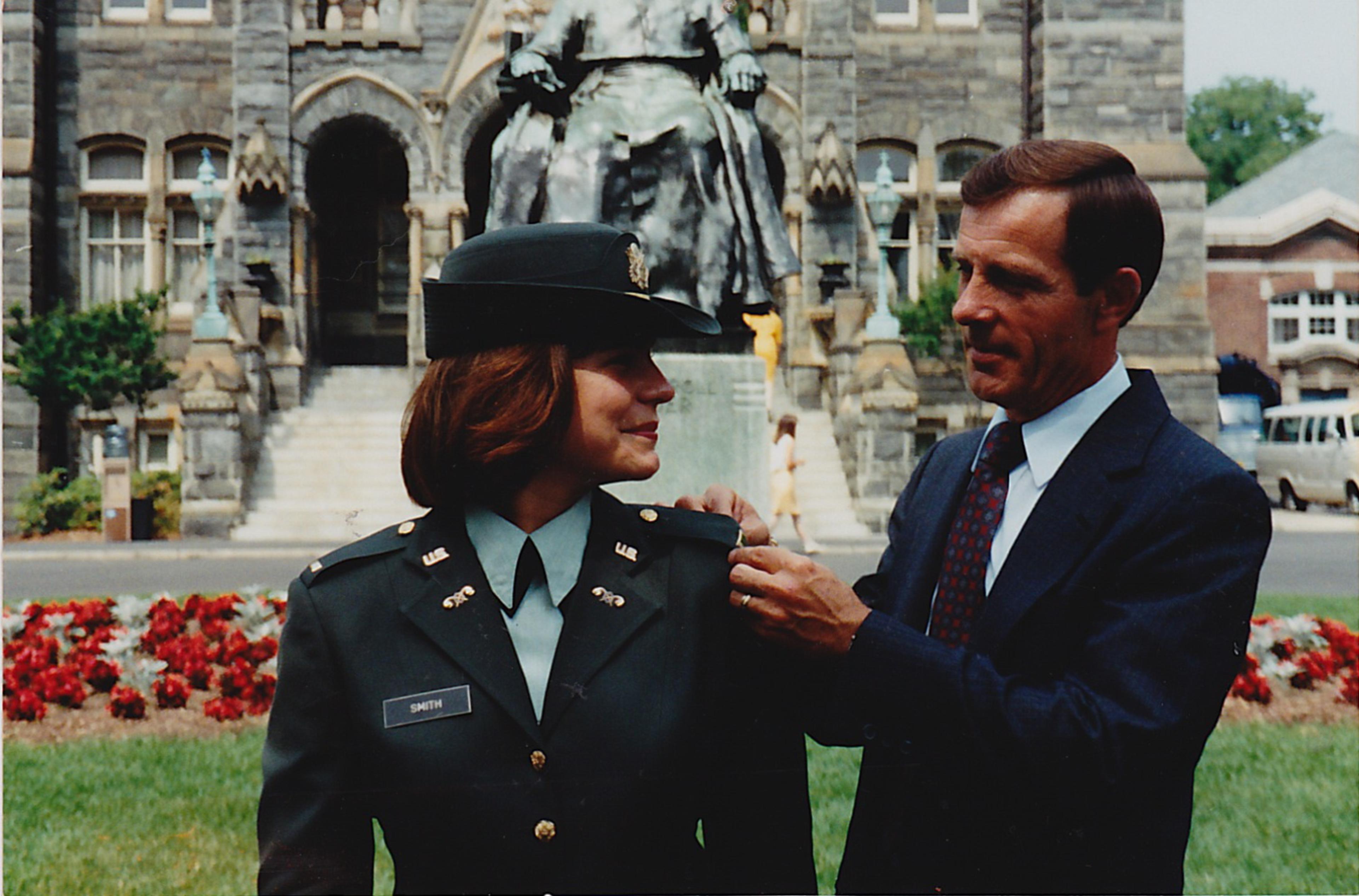 She wanted to complete the mission and do the job she was sent to Bosnia to perform.

Smith didn’t know it at the time, but her life was in jeopardy.

The blood clot in her leg was steadily morphing into thousands more and spreading throughout her body.

Smith returned home to Fort Dix in April 2002 and in September was sent to Walter Reed National Military Medical Center in Bethesda, Maryland where her medical team found additional blood clots in her vital organs.

“They [medical team] initiated paperwork that basically gave me 24 hours to live,” said Smith, “I was dying.”

She was put on imminent death protocol, and her family was called to the hospital in what were assumed to be the final hours of her life.

Fate had other plans.

Smith eventually battled through a successful amputation of her left leg and procedures to address blood clots in other areas of her body.

Fate’s nasty twists have led to beautiful turns which would eventually intersect Smith’s life with the Gary Sinise Foundation and unite her with a young service dog named Isaac.

“With those failures, there’s more of a gift and a blessing in that, you just don’t know it at the time,” she said about the loss of her leg and how it led to her second calling.

Her use of a prosthetic became an instant bond with amputees at Walter Reed who had been injured serving in combat zones in Iraq and Afghanistan.

Smith’s hard-charging efforts and positive attitude in physical therapy sparked an unspoken rivalry between her and many of the amputees who were inspired to forge ahead in their recovery process and overcome their injuries.

“I realized how healing and therapeutic it was not only for them but for me especially,” she said.

The work she was doing at Walter Reed, including speaking with families of injured service members, was an epiphany.

A new mission was born.

“I really found that the most rewarding thing is to help one service member or their family,” she said about serving others, albeit wearing a different uniform.

As more and more troops came back home with a range of injuries and amputations, she said, “the ability to help grew as well.”

From Walter Reed, Smith would ultimately become the senior media relations liaison at the USO.

The position ended up bringing her into contact with Gary Sinise during his visits to Walter Reed where Smith would take him around the hospital to visit wounded service members.

Over the years they would run into each other on the floor of Disabled American Veterans (DAV) conferences and while attending different events.

Their hard-fought effort to raise funds to build the American Veterans Disabled for Life Memorial in Washington, D.C. solidified their relationship.

In 2013, two years after launching his namesake foundation, Gary wanted to develop an ambassadors program to complement his efforts in evangelizing the foundation’s mission of serving and honoring America’s service members, veterans, first responders, and their families.

Gary personally selects ambassadors for their exceptional character and patriotism who would attend fundraisers and ribbon cuttings and present the mission of the foundation and its available resources in public gatherings through speaking engagements. 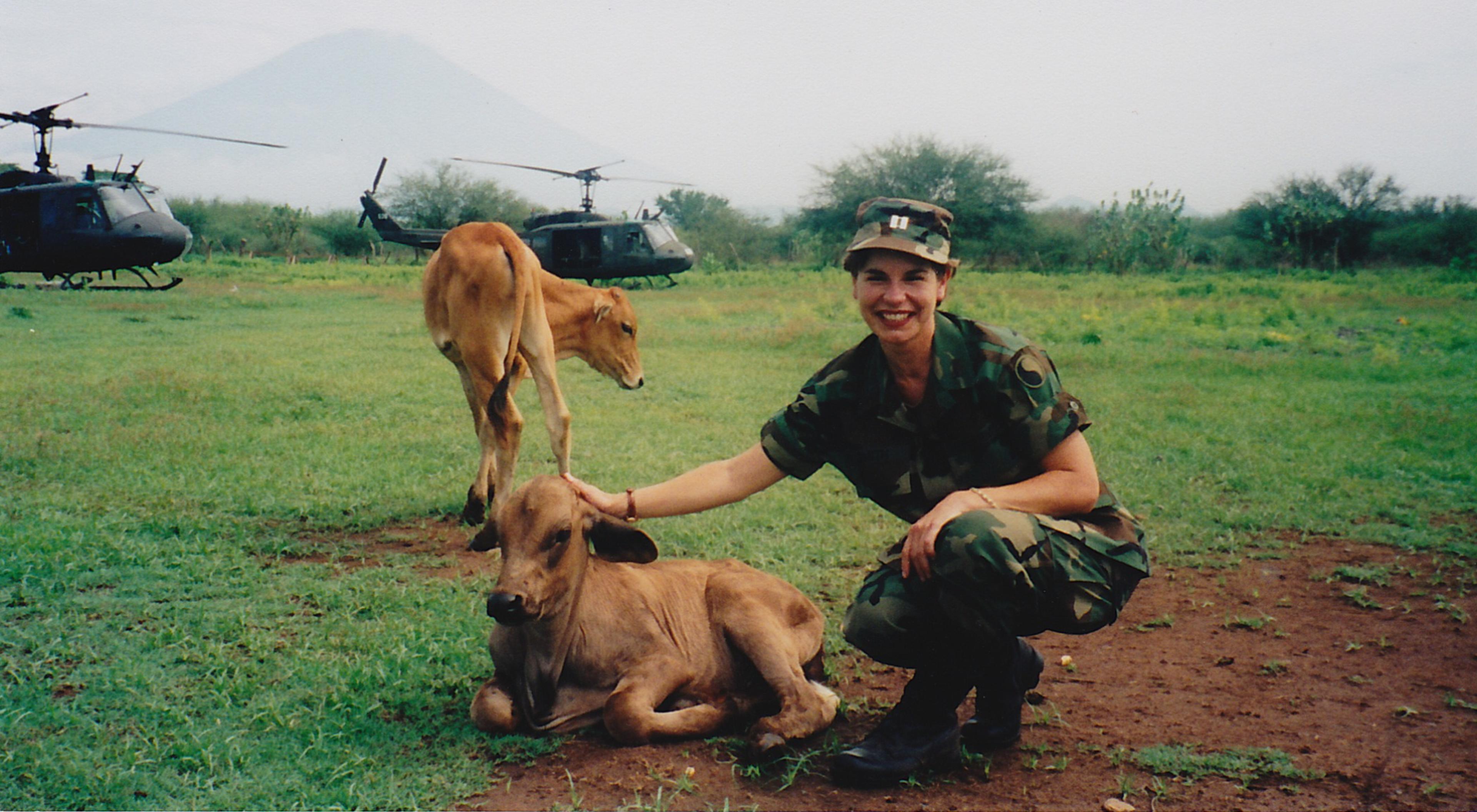 When Leslie received an email from Gary on January 13, 2013, asking if she would accept an ambassador role at the foundation, she was humbled by the offer and exuberant in her acceptance.

Being an ambassador, said Smith, fits the bigger purpose in her life and why she fought to live all those years ago at Walter Reed.

Speaking on behalf of veterans, service members and first responders, Smith said, “We as a whole don’t give up because he [Gary] doesn’t give up on us.”

Years before joining the Gary Sinise Foundation though, Smith had been dealing with bouts of complete vision loss.

She was initially hesitant in getting a service dog but time and again she was aware that her daily struggles weren’t going away or improving. She was all too frequently bumping into people, whether walking down the sidewalk or shopping at the grocery store.

When her application for a service dog was approved in 2010, she received a phone call. She remembers the words spoken to her verbatim:

“Issac’s been waiting for his special person.”

Issac was a rambunctious yellow Labrador retriever when he was rescued from a kill shelter by Canines for Veterans. “He was placed on the euthanasia list with a 24-hour countdown,” said Smith about Issac’s backstory as a stray puppy found in Myrtle Beach, South Carolina.

He was taken to Camp Lejeune in North Carolina for a years’ worth of training before being given to Smith, who by then had lost vision in her left eye.

“He was the strongest, most adapted service dog that would be able to handle all the different traveling events, venues, and things that I was doing,” she said about being paired with Issac.

When Issac first met Smith, within seconds, he promptly went to her left side.

He’s been there ever since. 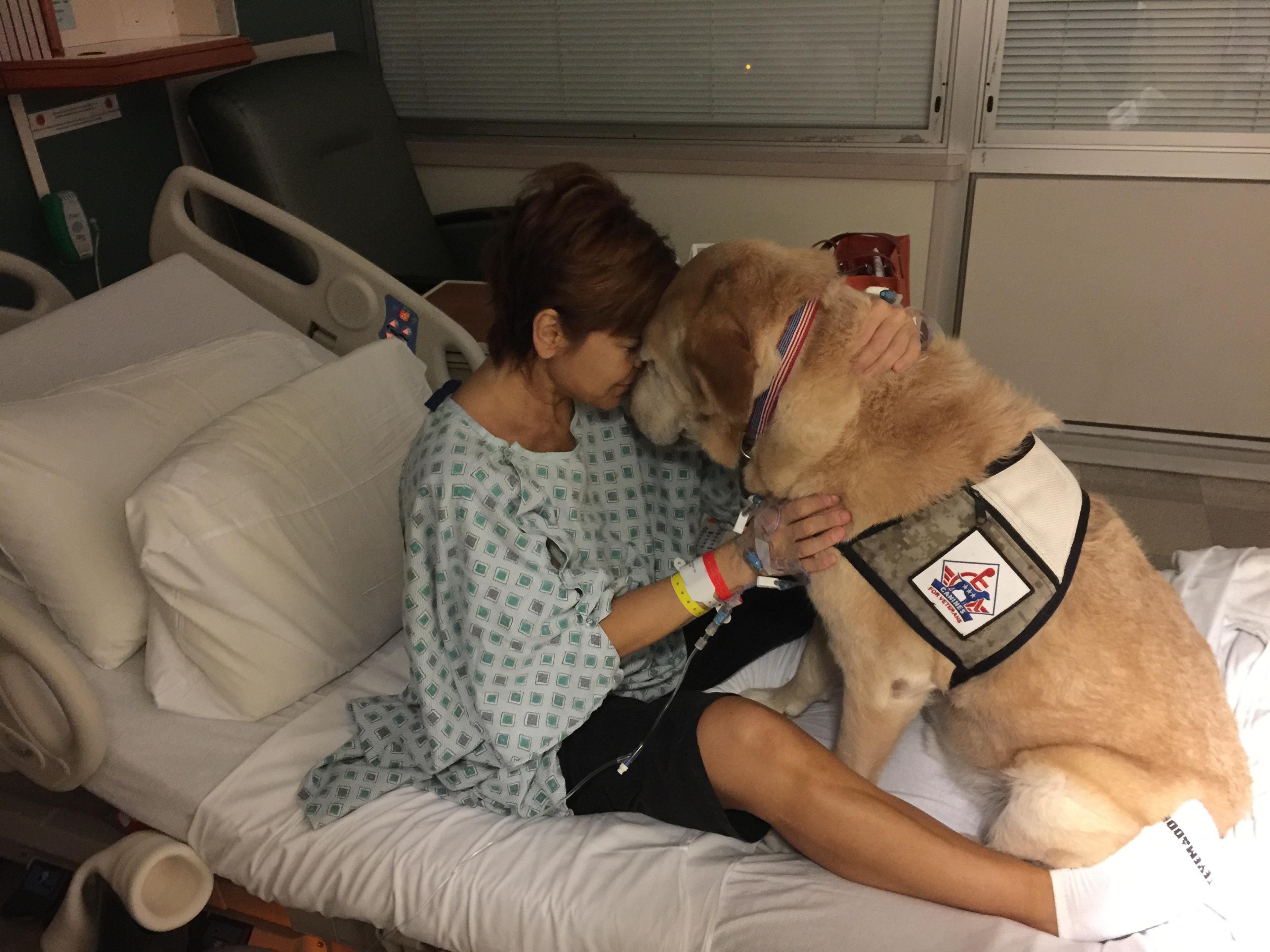 “I learned very early on that he just anticipates everything,” said Smith.

Since she became an ambassador of the Gary Sinise Foundation, so too, has Issac.

“Every time we’re at events he wears his bandana [branded with the foundation logo and name],” said Smith who considers Issac her best friend and a hero.

Looking back on her service record, Smith is unfazed by what could have been a distinguished military career.

While the definitive reason why she got a blood clot during her deployment to Bosnia remains an enigma, Smith said that medical experts at Johns Hopkins reason that she may have been exposed to a chemical agent or gasses emitted from mass grave sites that dot Bosnia and Herzegovina, the former Yugoslavia.

She lives with near-total vision loss, attributed to the lingering effects from blood clots that once permeated her insides.

“Everything has been worth it,” she said of serving in the military and volunteering for the mission in Bosnia.

“I was meant to be in Bosnia because my time there had to put me at Walter Reed in place for when the guys started coming back.”

Fate has inserted itself at critical junctures in Leslie Smith’s life whose purpose now is as important as it was while she was serving her country in the Army.

Representing the Gary Sinise Foundation as an ambassador is the highest honor, says Smith. “That is the ultimate role in representing everything that has gotten me to this point.”

She now packs her bags to fulfill the mission of the foundation.