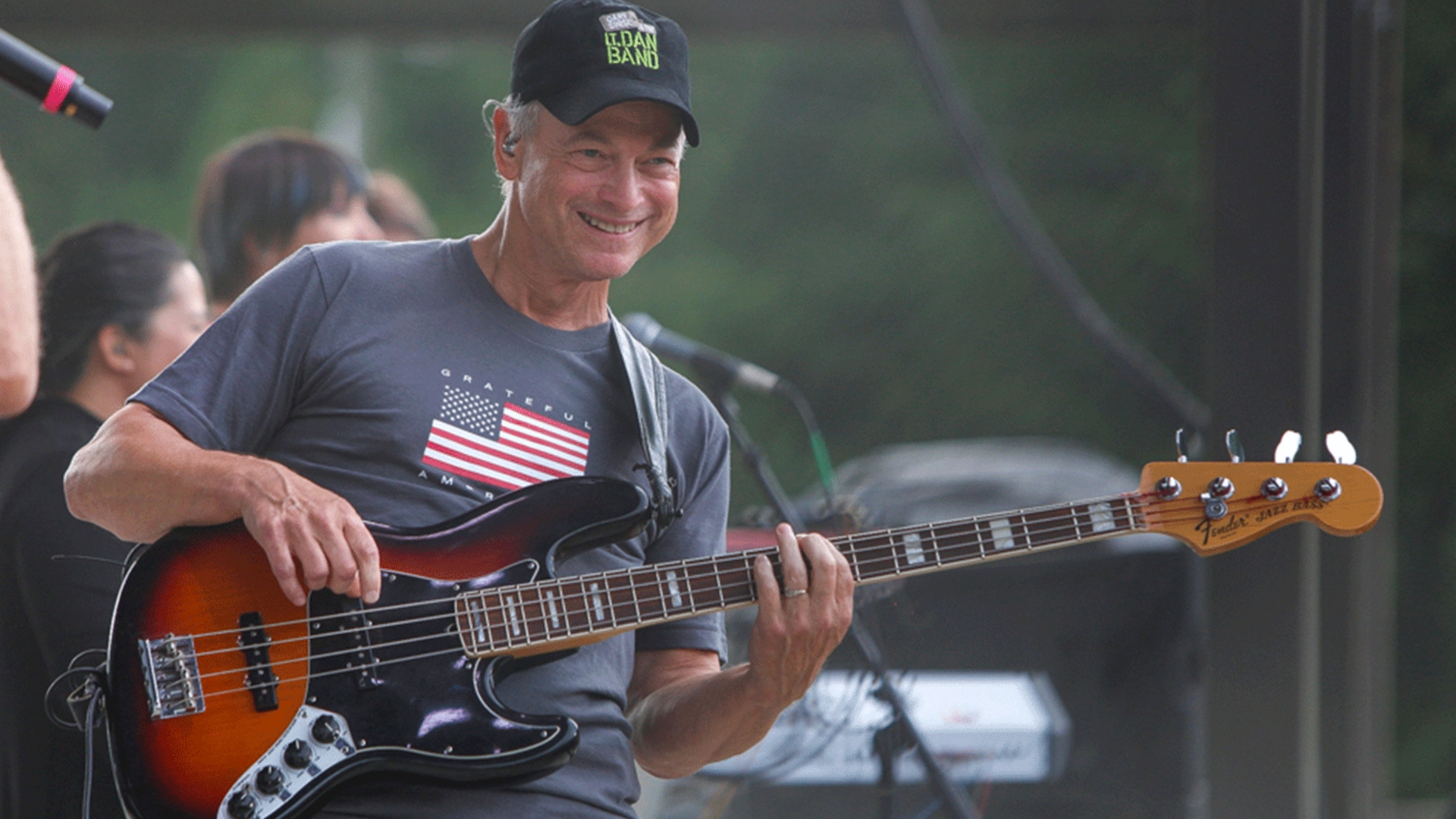 Through the creeping fog and rain, they came one after another. Their silhouettes nearly invincible. Marching in formation, step in lock step, they came. Their cadence was recited in unison, loud and proud, echoing across the open grass field.

Company after company of soldiers paraded onto a soggy Wetherby Field at Fort Benning, Georgia in the lead up to the evening’s Gary Sinise & The Lt. Dan Band concert on Saturday, August 3.

An hour before showtime, a downpour of rain had engulfed the area with intermittent flashes of lightning which called into question whether the concert would be postponed or even cancelled.

Despite the conditions and the possibility of postponement to allow for the storm to pass, the troops, their families, and those from the community waited in anticipation for a night of honor, gratitude and rock and roll. 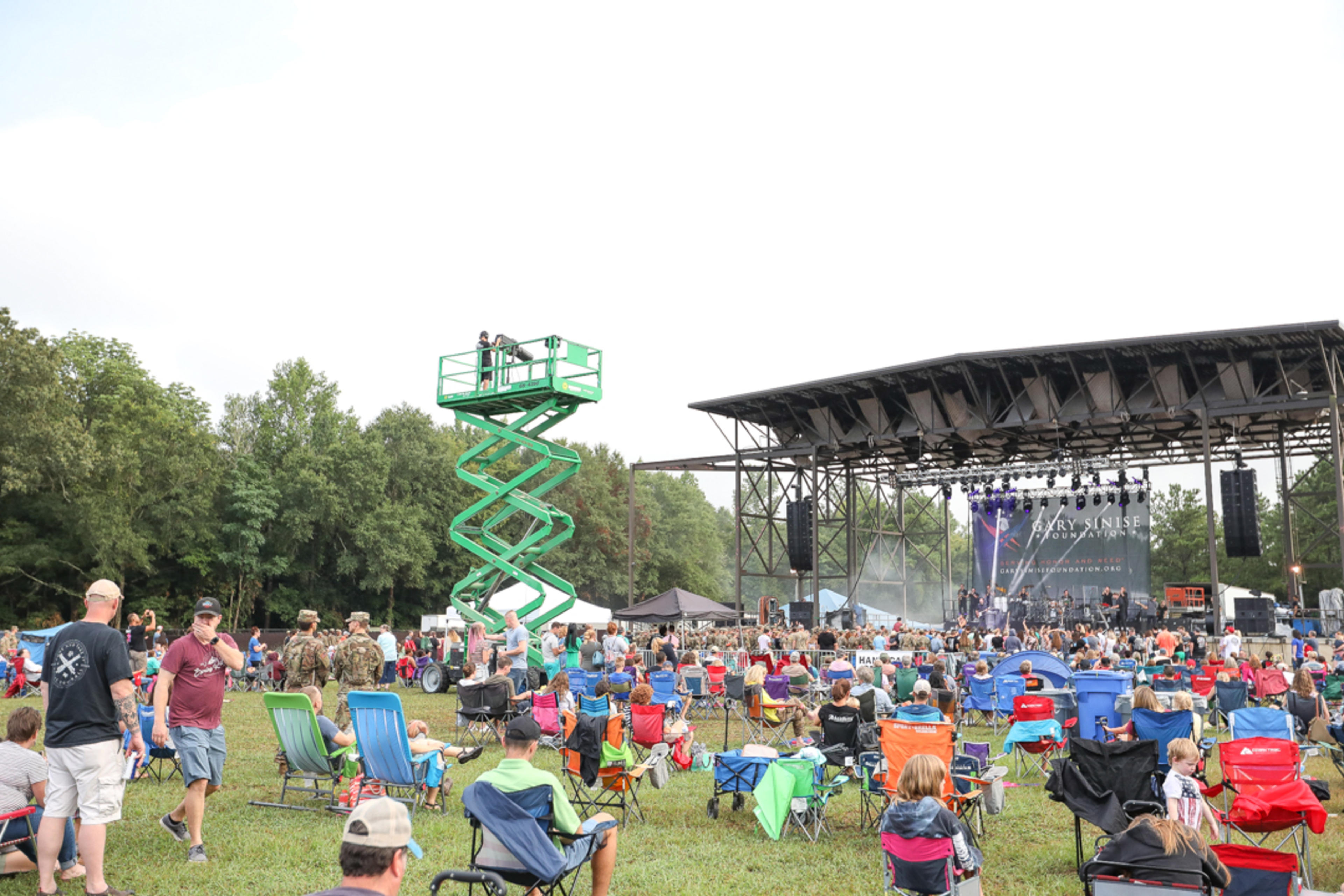 As the storm began to taper off just as showtime neared — the stage furiously being dried by hand, squeegees and massive fans to clear off water that had collected in various corners because of the storm — the band breathed a sigh of relief knowing they would be performing without delay.

Gold Star families—the immediate family members of a fallen service member who died while serving in a time of conflict—from the Fort Benning community were in attendance for the evening festivities including Kisha Patterson whose husband, Staff Sergeant Esali Patterson, was killed in Baghdad, Iraq in April 2004. Kisha came to the concert with her family.

“It’s been 14 years and I’m really just breaking out of my shell. I wouldn’t go to anything, I wouldn’t participate in anything,” said Patterson about the hardship and emotional toll she has endured since losing her husband.

When she found out that “Lt. Dan” was coming to Fort Benning, Patterson was excited.

“Forrest Gump is one of my favorite movies,” she said while laughing about the connection she makes when thinking about the film’s iconic character, Lt. Dan Taylor, and Gary Sinise. “We wouldn’t have missed this for the world.”

“Because of what he does and what he gives back,” said Patterson about Gary, “we’re able to keep going and to take part and be a part of certain things that you may not have gotten the opportunity to be a part of.”

Chana Carpenter was among the other Gold Star spouses who were excited to meet Gary during the pre-concert meet and greet, and enjoy a night of music.

She lost her husband, Army Ranger Sergeant First Class, Ethan Carpenter, in March of this year during a training accident. She came concert to make connections and meet other people.

“It’s great for everybody to get together who are in the same situation and under the same circumstances,” said Carpenter. “At least there’s a little bright side to get together and have fun.”

When the band finally came on stage — breaking a five year hiatus since their last performance at the base — singing “Locked Out of Heaven,” by Bruno Mars, a sea of civilians and battle dress uniformed troops greeted them with a roar of applause. 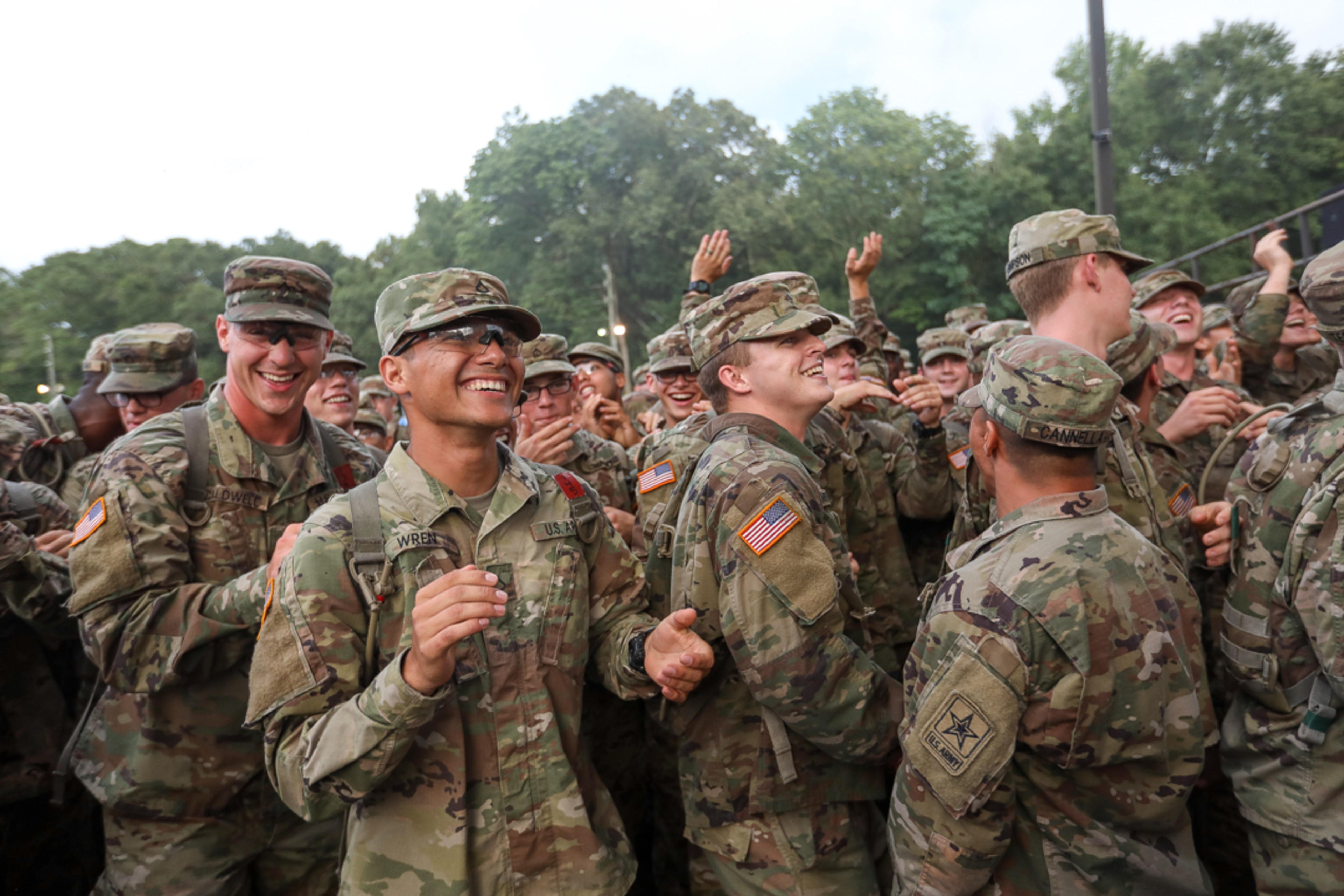 For many of the troops standing about the field, the concert came at just the right time during basic training; a momentary reprieve from their daily physical and mental grind that will eventually transform them from civilians into soldiers.

“This is awesome. The band is great and it’s what we’ve been looking forward to,” said Private Damien Welker who was watching the concert with his buddies Bradley Watkins and Chandler Whitfield.

“Best time of my life,” said Whitfield about attending the concert during basic training.

The group, who are two weeks shy from graduating, came to Fort Benning nearly 12 weeks ago from their homes in Arizona, North Carolina, and Tennessee.

Like many others, the boys took every liberty to enjoy themselves despite the watchful eyes of their drill sergeants whose stern faces kept them in check and who lingered about the field. 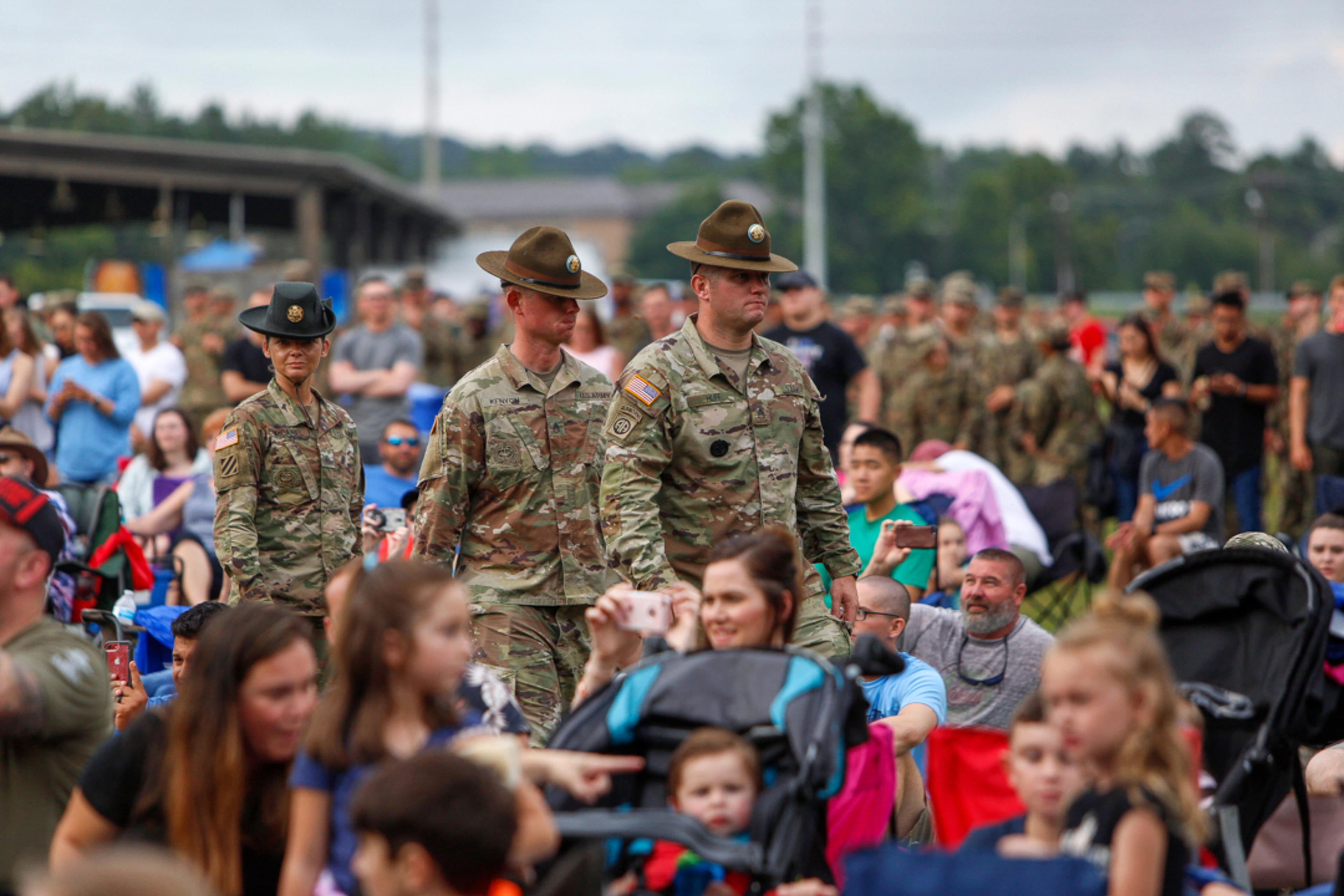 “Nothing like babysitting privates,” said one drill sergeant,  tongue in cheek, who asked not be named.

Lynn Roman and her husband were standing near the center of the field sandwiched between lawn chairs and families taking in the entertainment. They were there with their three grandchildren.

“It’s her fourth birthday,” said Roman about her granddaughter, Caroline, who was running around with her sisters playing tag.

“We wanted to continue the celebration and give mom and dad the night off,” she said about bringing her grandchildren to the concert.

Halfway through the evening, Gary took a moment to acknowledge Gold Star families in attendance. His message of gratitude, appreciation and honor was warmly received and drew widespread applause. 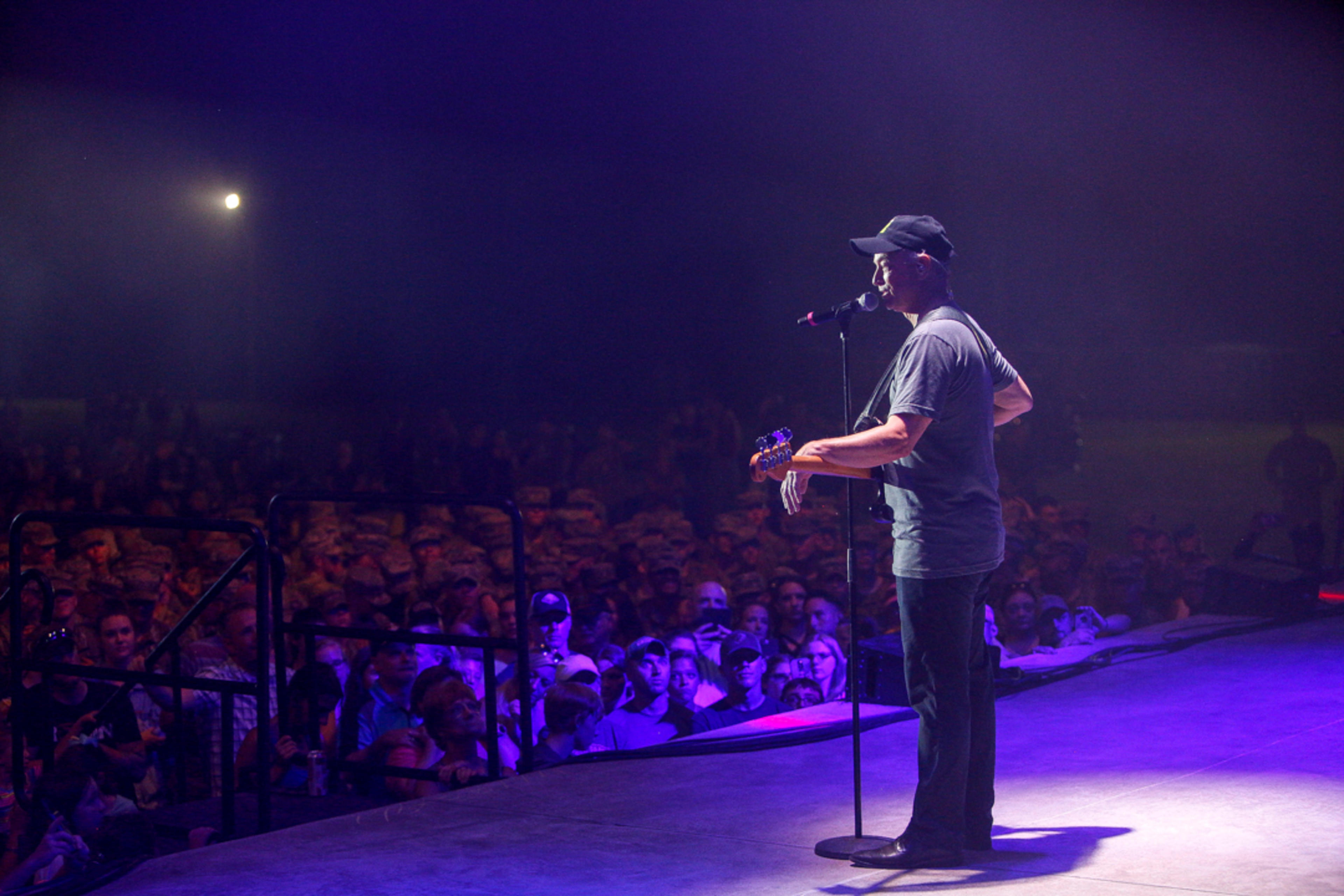 “He’s doing great things for the military,” said Medal of Honor recipient Bennie Adkins about the work being done by the Gary Sinise Foundation. 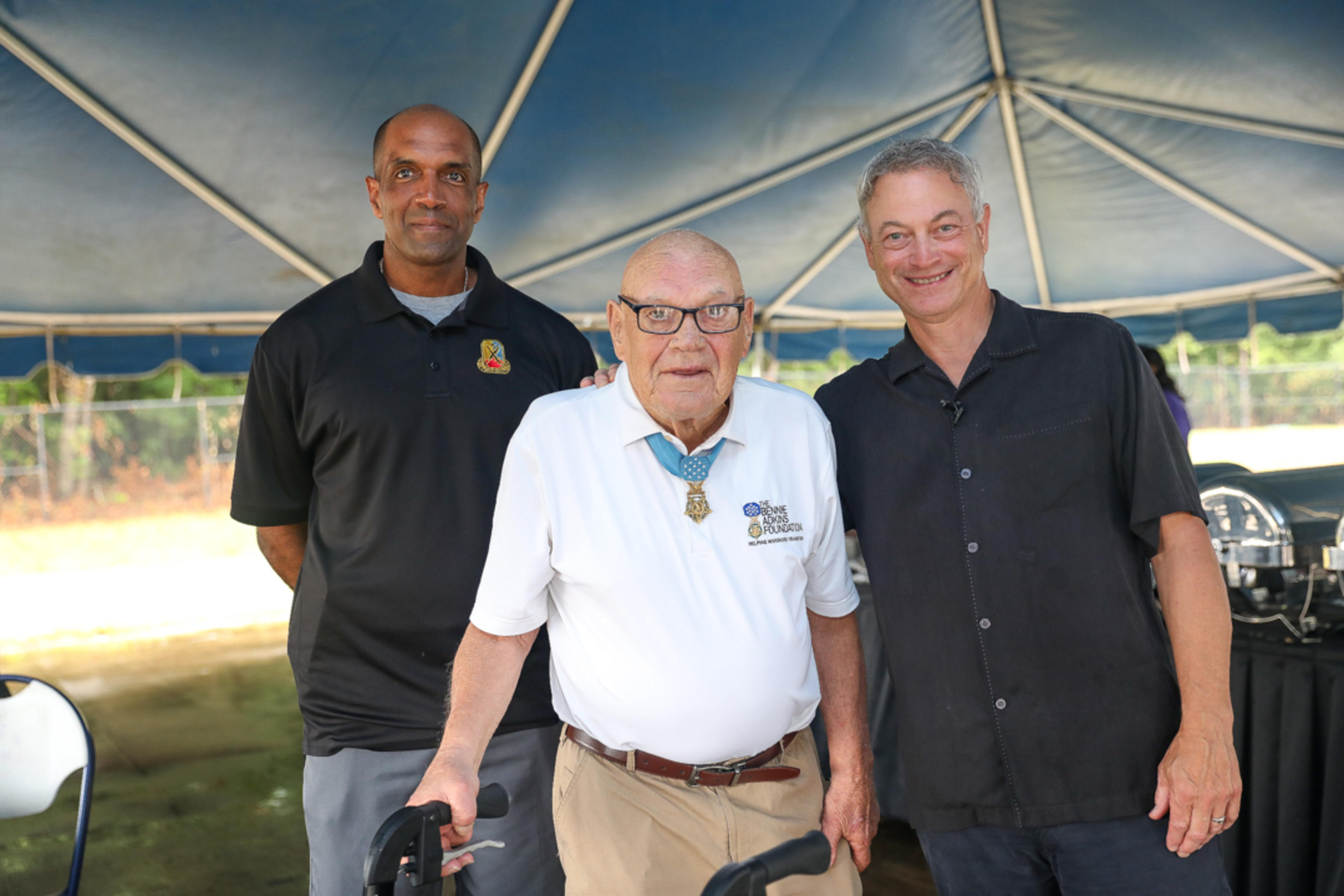 “It builds great camaraderie with our soldiers, their family members on and off post,” said Major General Gary Brito about functions like Gary Sinise & The Lt. Dan Band performing on base.

The general also said that such events foster stronger ties between the military and civilian communities at Fort Benning and the surrounding area.

With nearly the entirety of the left side of the bottom of the stage overtaken by the troops who were jumping up and down, hollering, and singing to nearly every song, the camaraderie was on full display. 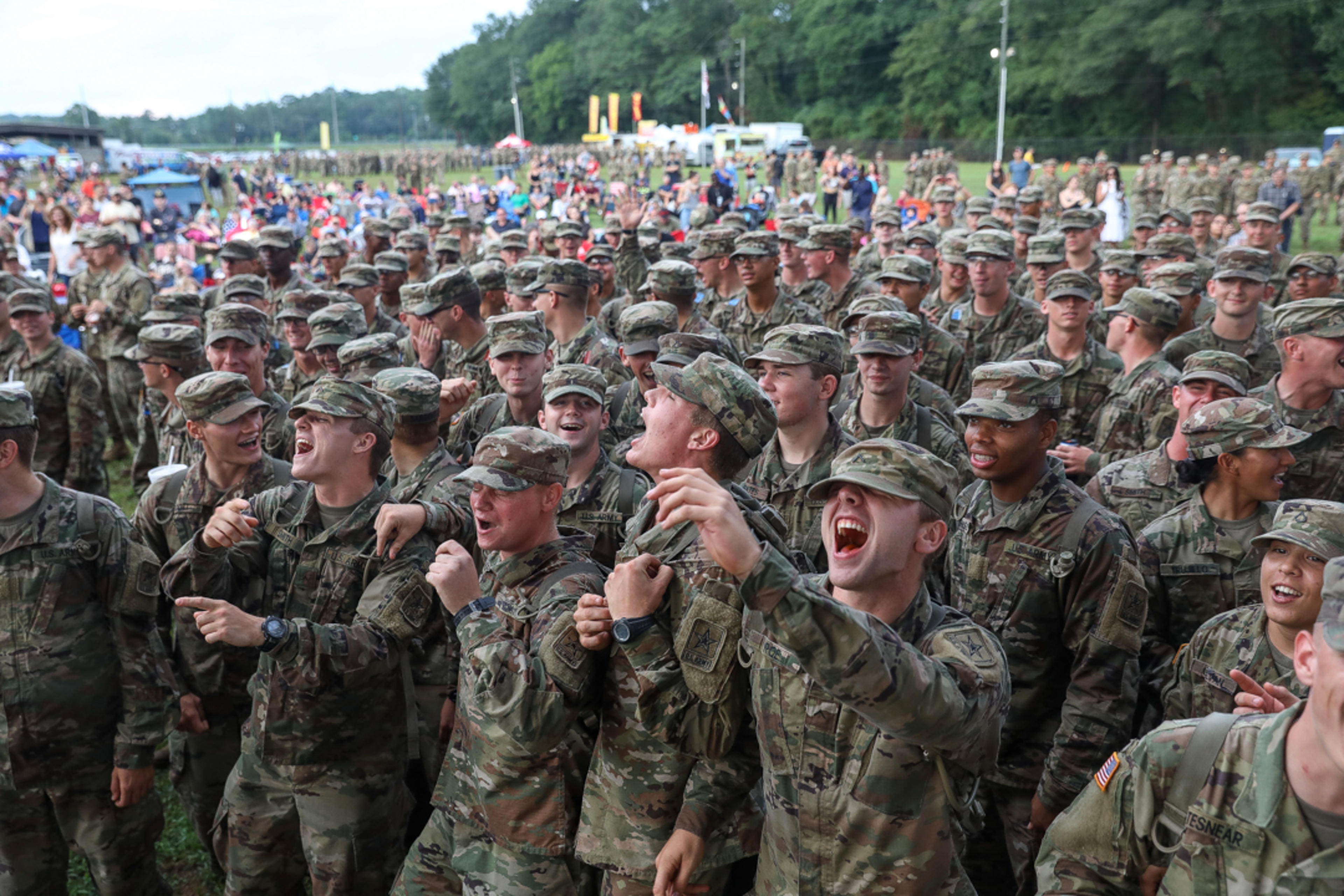 As the concert wound down the troops began making their way back to the rallying point at the main entrance to the field to form up and march back to their quarters.

Sweat dripped down their faces and rolled off their uniforms. As they ran to get back to their prearranged position, avoiding the ire of their drill sergeants, these soldiers in the making summed up their experience of seeing Gary Sinise and the Lt. Dan Band in three simple words: “it was awesome!”