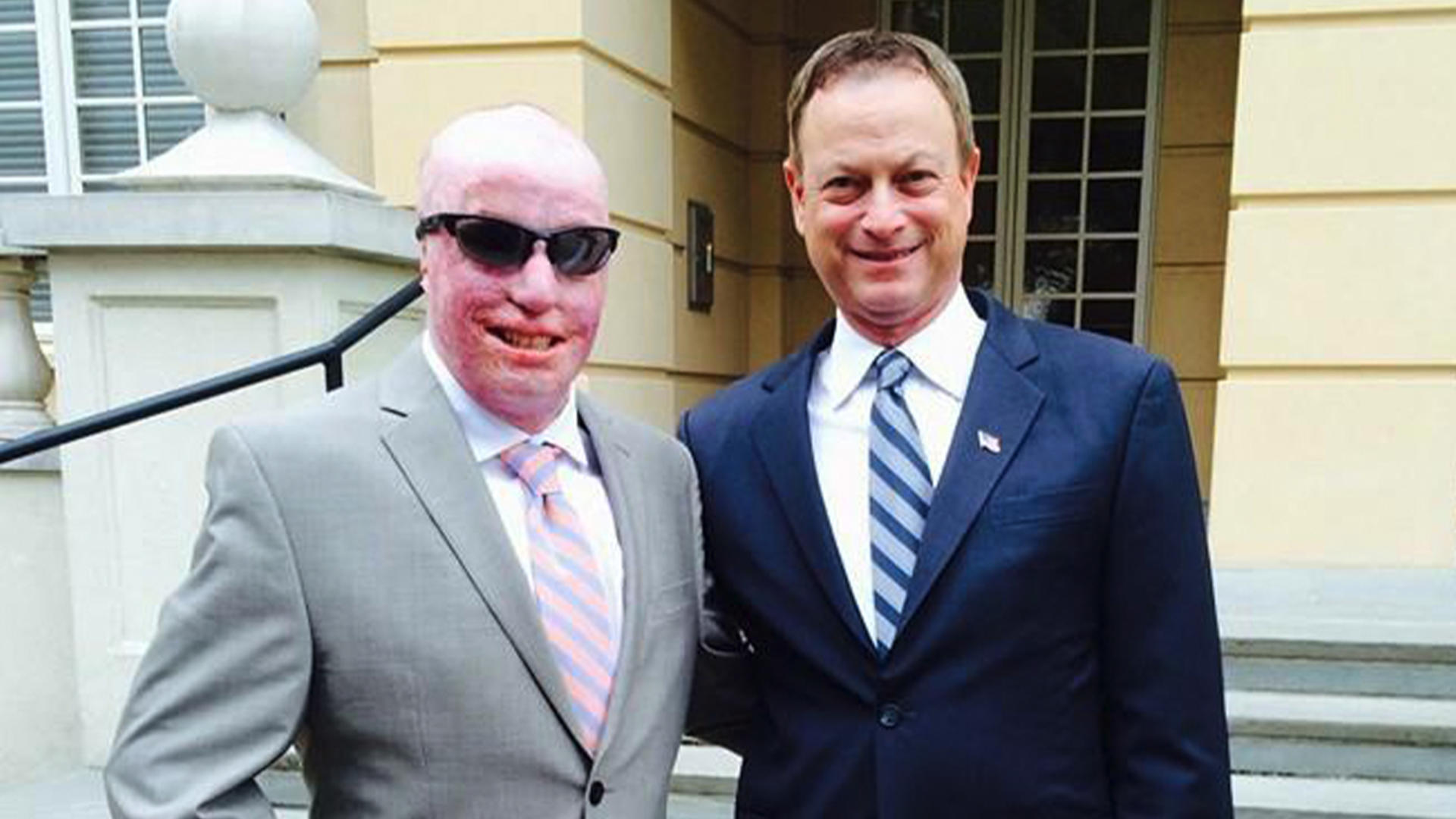 "Mike is an amazing individual who’s dedicating his life to honoring his fallen brothers through serving his fellow veterans. One of the early ambassadors for my foundation, he now helps us with our veterans’ outreach as our military and veterans resource manager and I am grateful for the great work he does." Gary Sinise 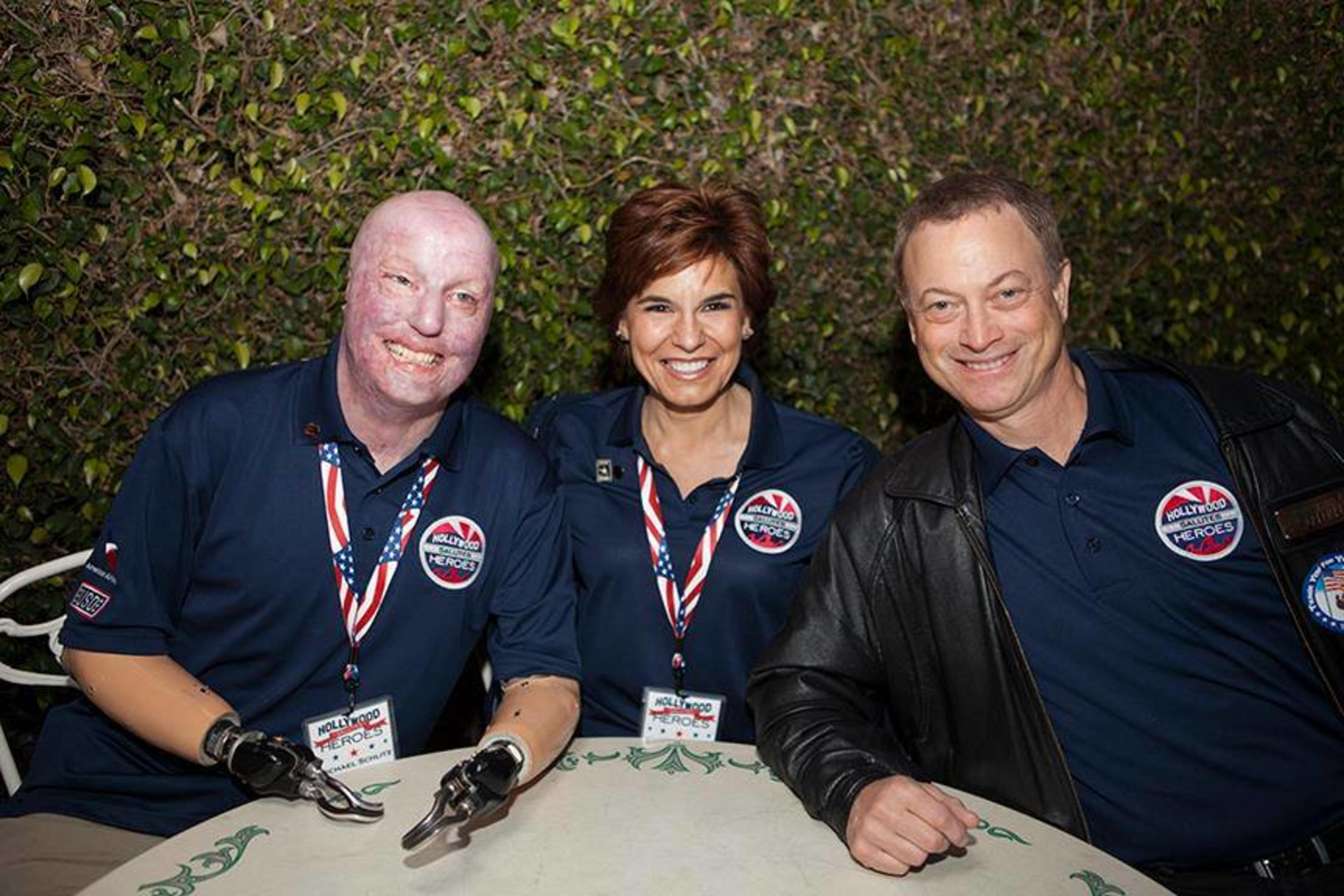 On the backlot of CBS Studio Center in Studio City, California one day in August 2010, a lifelong friendship began between Army veteran Michael Schlitz and Gary Sinise, who on that day was in-between takes for the television series, CSI: NY.

The introduction of the two was not accidental. It was planned out ahead of time by Leeann Tweeden, a mutual friend of theirs and a well-known broadcaster, model, and USO participant.

At the time Schlitz was making trips to Los Angeles from his home in San Antonio to receive facial reconstruction treatment at UCLA through Operation Mend; a program that began in 2007 which covers the entirety of costs for surgical and medical treatment for post-9/11-era service members.

Schlitz joined the Army in 1996 as an infantryman where he was resolute in serving his country and pushing himself to attend distinguished schools including Ranger School — the Army’s premier combat leadership and small unit tactics course with an attrition rate near 50%.

Passing the 62-day course, which tests the limits of both your physical and mental endurance, enabled Schlitz to join the elite ranks of the Rangers.

Little did he know that the same mentality and fortitude utilized throughout Ranger School to stay the course and put one foot in front of the other would come back in his greatest hour of need after sustaining serious injuries during a mission in Iraq on the afternoon of February 27, 2007.

Schlitz was midway through his 15-month deployment with the 10th Mountain Division in Iraq. He and his unit had been serving as a quick reaction force, turning civilian homes along key transportation routes into battle positions and clearing routes of explosive devices and other hazards that had the capacity to take out soldiers and vehicles.

“Everyday is the same thing you prep your men, you give them the mission, load the vehicle, you do some last checks and you roll out.”

Schlitz and his unit were well trained and knew what to look for on the streets of Baghdad. The area in which they were operating was the Sunni Triangle, which, in 2007, was the scene of intense urban, close-quarters combat between coalition and enemy forces. Casualties in the Sunni Triangle were high.

“Not only are you looking for the IED’s but you’re looking for people on the side of the roads with grenades and rocket-propelled grenades.”

As the sun began to rise on the morning of February 27, Schlitz and his unit were already a few hours into their 15-hour-long mission of clearing the roads of explosives when the vehicle he was riding in triggered a powerful explosive that had been hidden in a nearby drainage pipe.

Schlitz, riding in the passenger seat, was thrown from the vehicle by the blast. He was covered in flames from the explosives which was fueled by propane.

He was in survival mode and in intense pain while burning alive. “I was burning lying face down on the ground and I pretty much thought that was it.”

Rescued by fellow teammates who were able to extinguish the flames that had engulfed Schlitz, he was then airlifted to a coalition hospital to begin immediate, life-saving operations. From there he was taken to Landstuhl Regional Medical Center in Germany before being deemed healthy and stable enough to fly from Germany to Brooke Army Medical Center in San Antonio.

His heart had stopped beating on multiple occasions while on the operating table in Baghdad and in Germany.

“It took about 80 hours to get back to San Antonio from the time I was injured.”

Schlitz sustained burns to 85% of his body and lost both of his hands as well as the vision in his left eye. More than a year went by before he saw the full extent of his injuries.

“In 2008 when I finally saw myself for the first time, my heart dropped a little bit.”

With a strong support system behind him including his mother, extended family, friends and Ranger buddies, Schlitz was able to survive the dark days early on and maintain his positive outlook on life.

Aiding in his recovery and uplifting his spirit was his selection into Operation Mend at UCLA where in April 2010 he began receiving facial reconstruction treatments.

Months later and after a treatment visit to UCLA, Schlitz, along with his mother, Robbi, who was with him that day, and Leeann Tweeden planned on going out to lunch.

The plans were quickly dashed when Tweeden informed the Schlitz’s that they were taking a detour to CBS. They were in for a surprise.

“She’s banging on Gary’s RV [trailer on the backlot] and out pops Det. Mac Taylor,” recalls Schlitz of Tweeden summoning Gary who was decked out as the iconic character from the show and outfitted with his badge and carrying a prop gun.

Like a lot of people who meet Gary for the first time, the vivid imagery of him playing Lt. Dan Taylor from the film Forrest Gump, came to the forefront of Schlitz’s conscious.

“Of course I’m like every other person who thinks of Gary Sinise as Lt. Dan,” he said. “I thought it was pretty cool."

The two hung out that afternoon and got to know each other. When production resumed, Schlitz and his mother were able to stay on set and watch Gary and the rest of the CSI crew in action.

“Gary and I hit it off and we exchanged emails and phone numbers.”

Schlitz had been giving motivational talks and advocating on behalf of veterans since retiring from the military in March 2010. It wasn’t long after meeting Gary on the set of CSI that he would see him again and many other times thereafter.

Gary recognized the powerful and inspiring story Schlitz conveyed to audiences and how it aligned with his namesake foundation which at the time was just beginning to get off the ground.

In early 2012 Gary began to recruit Schlitz to speak on behalf of the foundation which, said Schlitz, wasn’t a difficult sell.

“I flew to Washington D.C. and spoke at a fundraiser,” he said about the first opportunity to advocate on behalf of the Gary Sinise Foundation. “The next day he brought me in as an ambassador.”

Their relationship blossomed and in the summer of 2012 took an unexpected, yet welcome turn when Gary called Schlitz with a proposal to build him a specially adapted smart home free of charge.

A pillar of the Gary Sinise Foundation since its inception, R.I.S.E. (Restoring Independence and Supporting Empowerment) partners the foundation with corporations and nonprofits to build specially adapted smart homes at no cost for wounded veterans and first responders. The mortgage for the house and land is entirely underwritten.

“I actually said ‘No’,” recalled Schlitz when he first answered Gary’s proposal as he was already living in a home he had bought in San Antonio.

That same day Schlitz turned down Gary’s offer he began to reflect and reconsider his answer in light of his present living situation. He recognized his home would eventually need to be retrofitted and adapted to his injuries — a cost surpassing what the Department of Veterans Affairs would be able to cover.

Schlitz called Gary back the following day to inform him that he would be honored to accept a home suitable to his injuries. 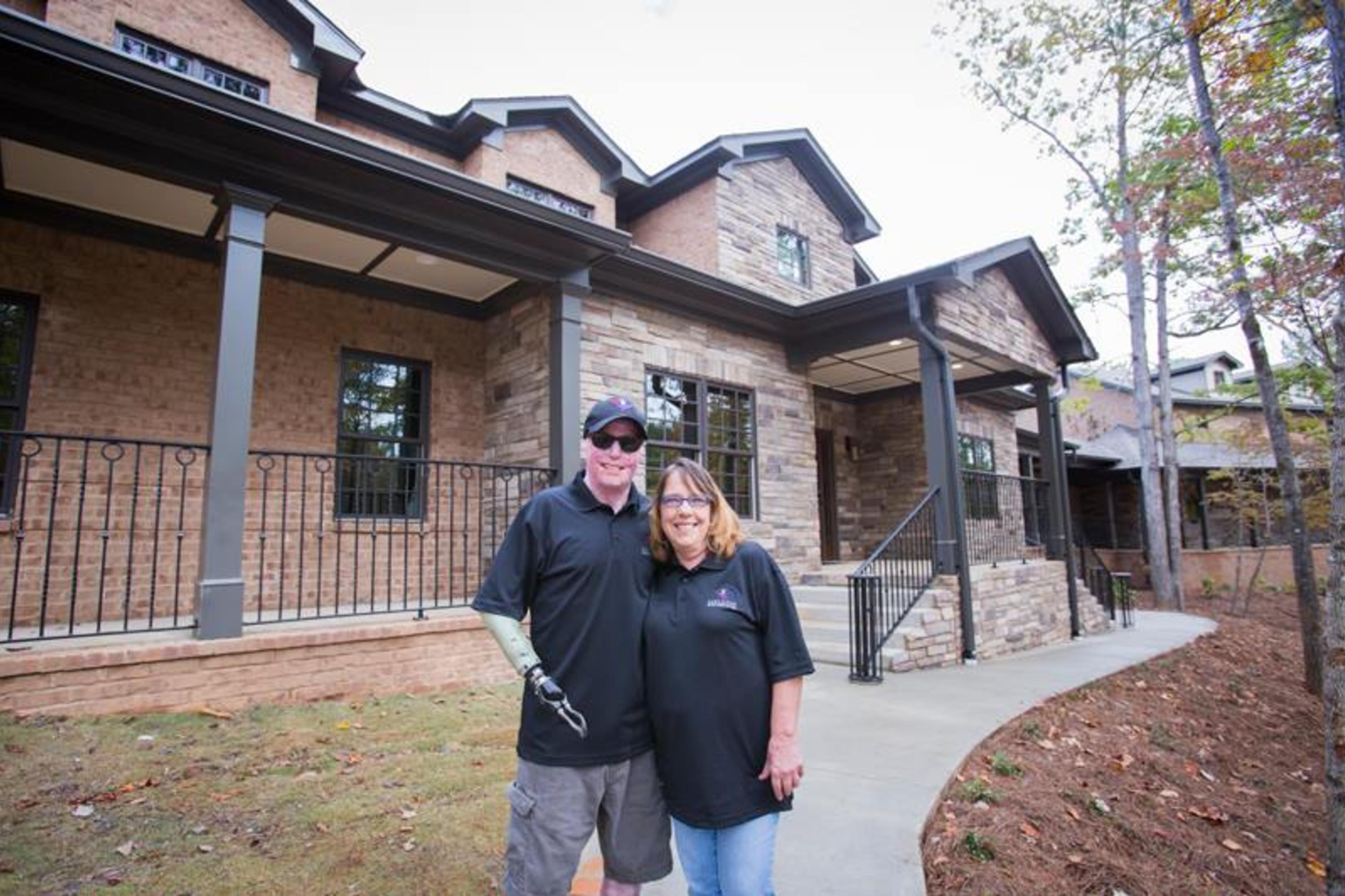 “When I try to explain Gary to other people I say ‘take whatever you’ve read about him and it’s an understatement,’” said Schlitz. “The guy is just the most humble, giving and passionate man you’ll ever meet.”

Gary’s overwhelming generosity and gratitude for the sacrifice Schlitz made in service to the country was a humbling experience.

“Veteran’s never want to just take stuff,” said Schlitz, “we always feel like there's somebody else out there whose injury is worse than us or who needs the support a little bit more than what we needed.”

The catch-22 of it all, he explains, is that a veteran down the road who might need a certain resource or support more than another, won’t be able to get it because of the timing and circumstances out of their control.

“There is so much more we can do but we don’t know who is out there that needs our support,” he said about the challenges facing him and the foundation reaching veterans who are uneasy or hesitant in asking for help.

Since 2016, the Gary Sinise Foundation in conjunction with Boulder Crest Retreat and Disabled American Veterans have been facilitating mentorship retreats for physically and mentally wounded service members, first responders, and their families. 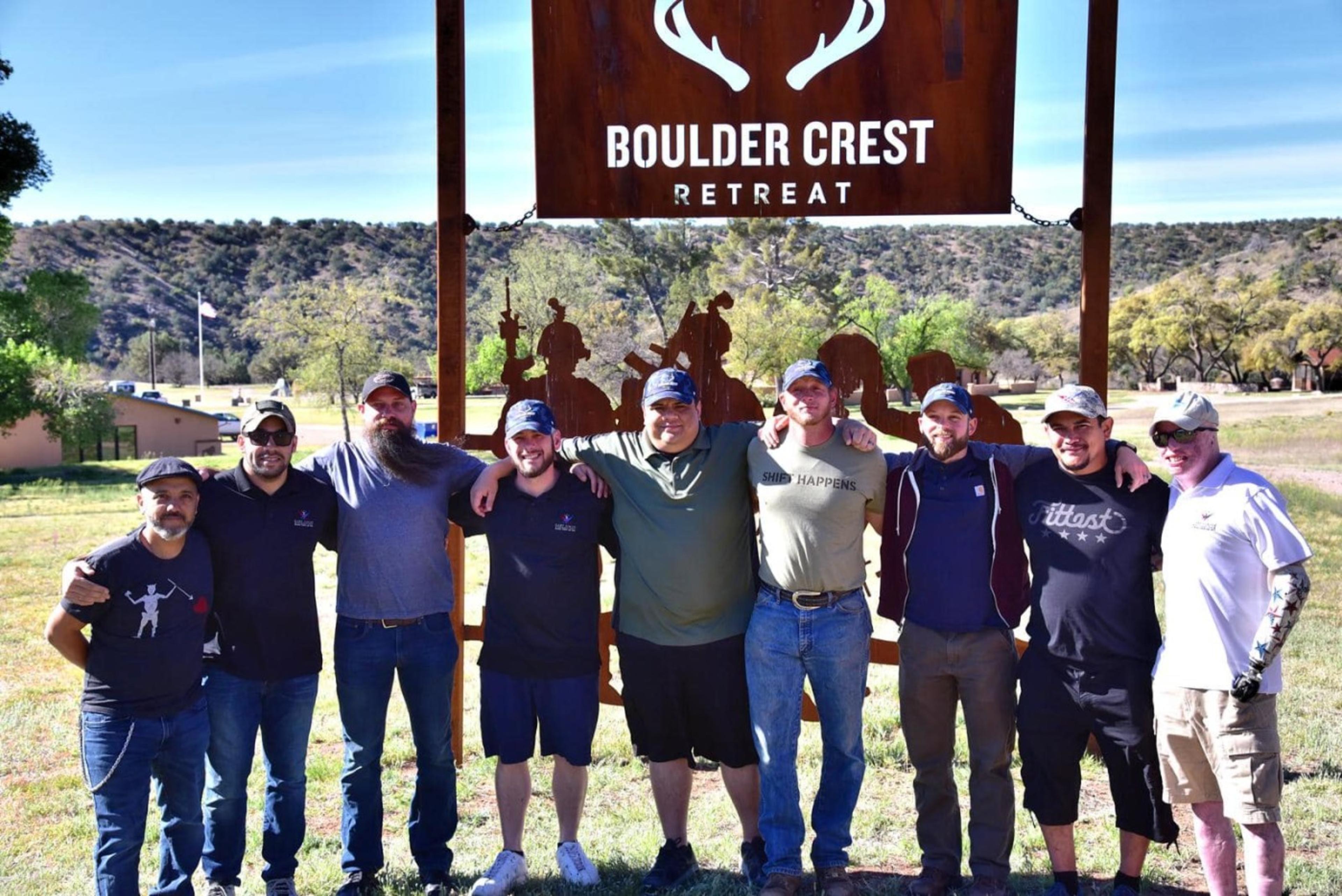 Schlitz personally selects Boulder Crest participants and is the defacto recruiter for the program utilizing all methods of communication from social media to word of mouth to considering recommendations from past participants.

He is also in attendance during the retreat as a representative of the Gary Sinise Foundation; participating and supporting wounded participants.

Observing the progress made by participants is personal to him.

“I see how mad and angry and distraught they are coming into the program and where they’re at after the program when they’re smiling and they’re ready to take on the challenges the world has to offer,” he said.

Being ready and open to support and healing is not always a smooth process. “Not everybody is ready for healing.”

During recruitment, Schlitz asks potential attendees of Boulder Crest Retreat matter of factly, “is what you’re doing working because if it’s not working let’s try something else.”

“If you’re ready for the possibility of change,” he says, “if you’re ready to look at it from another perspective in a non-clinical way then let’s give this a shot.”

For many of those at Boulder Crest Retreat struggling with internal and external scars resulting from combat or a traumatic event, Schlitz is able to bridge his own experience with those participants by addressing how he was able to cope with his injuries and tackle life’s challenges head-on.

But he knows much work is left to do and many more lives left to be touched and honored. Serving those who have served our nation and communities on behalf of the Gary Sinise Foundation is a mission Schlitz takes to heart. It’s an avenue he takes to honor the lives of his comrades lost on that fateful morning in 2007 in Iraq.