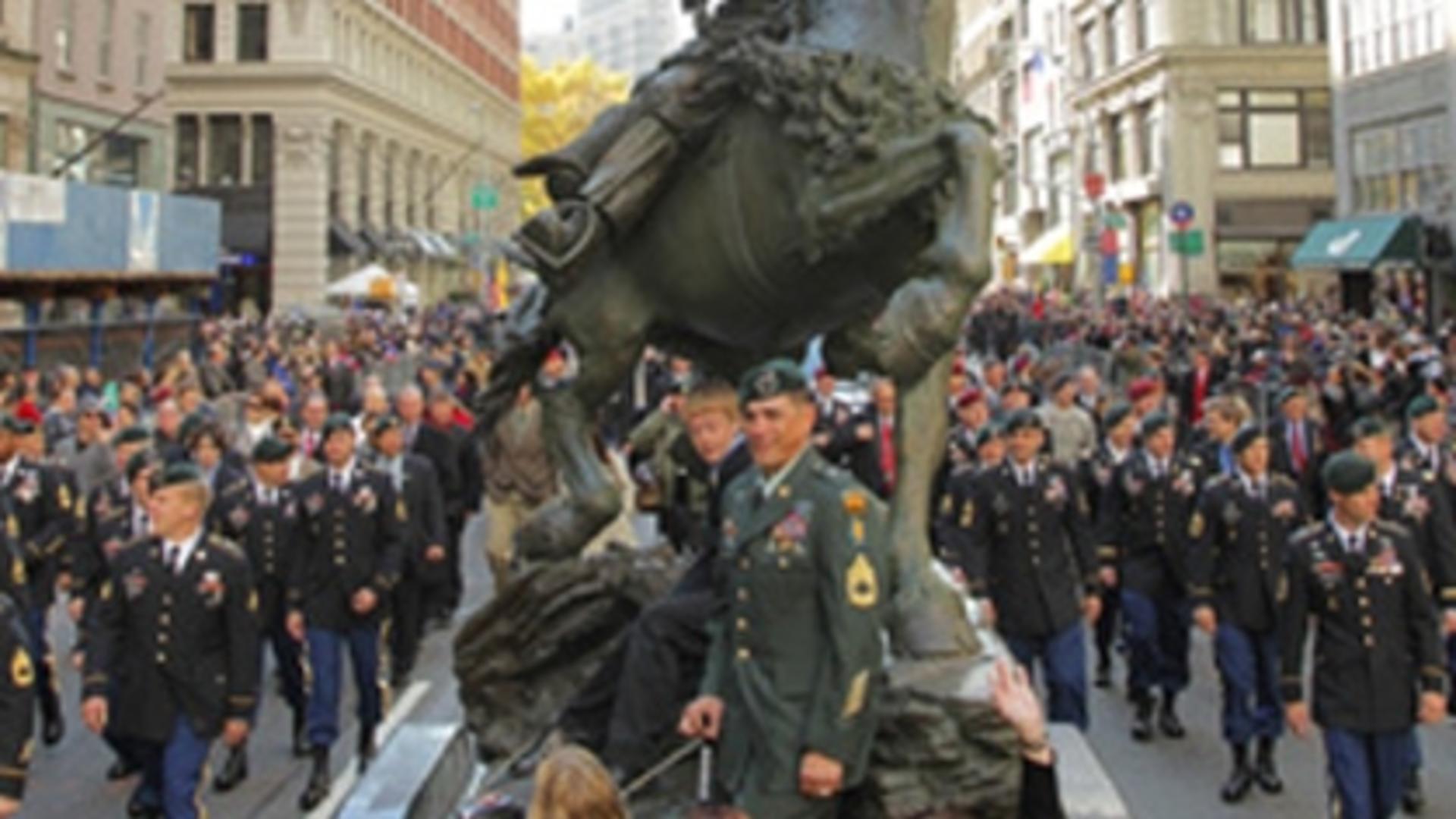 My buddy Gary Sinise has been urging me for a while to be his first "Guest Writer". As a war reporter, I share the troops' stories; I don't usually share my thoughts about their stories. But Gary's request made me think about the stories behind the stories I've covered, and about "ordinary people" taking action: doing something that made a difference and created a "ripple effect".

Over the holidays, many of you probably saw Steven Spielberg's "best picture" nominated movie, "War Horse". This heartwarming and heart-wrenching fiction, set during World War One, portrays "ordinary people" along the way, who take it upon themselves to do something (in this case, help a war horse). Unbeknownst to them, their individual actions create a "ripple effect".

Now let me share with you a true story I covered involving real war horses and real American "horse soldiers" who rode into battle right after 9-11. Real life and death struggle for both beast and man in the treacherous mountains of Afghanistan under fire. Yes, even a real cavalry charge. Not Hollywood.

"Sounds like something out of a movie, but this is real. This happened," the Vice President said (which makes me look forward to blockbuster producer Jerry Bruckheimer's future movie on these horse soldiers).

Their ground force commander told me, his 3-teams of only 34-men on horseback are "the children of Doolittle" (a reference to the brazen World War Two air raid on Japan after the attacks at Pearl Harbor). That was considered a possible suicide mission. The mission of our current-day horse soldiers was, too.

"Ordinary men" (ok, they were Special Operations Forces) took up the call: just like American soldiers in the past; just carrying on the tradition. Just like Medal of Honor recipient General Jimmy Doolittle's men did, before them.

Now here's where that "ripple effect" comes in...

An "ordinary citizen" heard the story of these horse soldiers and was inspired to take action: artist Douwe Blumberg sculpted a statue. 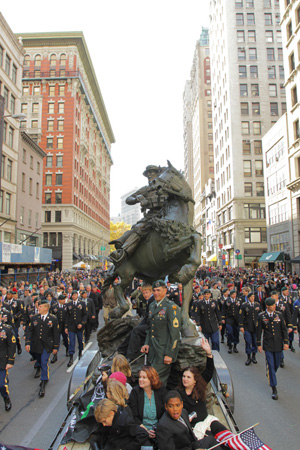 A few "ordinary citizens" on Wall Street heard about that statue. After losing friends and co-workers in the World Trade Center towers in the 9/11 attacks (and "tired of looking at that hole in the ground"), they took action: they commissioned the artist (that "ordinary citizen") to turn that Horse Soldier Statue into a monument near ground zero.

And "ordinary citizens", like our friend Gary Sinise, saw my story about the men and their mission... and took action: he reached out to help support the new memorial statue... unsolicited. Because history needed to be marked. Because 9/11 affected us all. Because this monument lets the world know: there are Americans out there who do care, who will not let another 9/11 happen again, who will not forget.

Memorials, monuments and statues are not just pretty pieces of art. They serve a purpose. They show that we value something greater than self.

Former President George Bush, who I interned for, said: "A nation can be judged in part by how well it honors its heroes." I translate this as not only our military heroes, but also our "everyday" heroes: firefighters, police, and the rest of our first responder community.

In fact, after my stories on the horse soldiers and the statue, I received an email from a retired Oregon State Policeman who'd served 30-years on the force. He reminded me there are "ordinary" men and women, here in America, who are killed or maimed everyday protecting citizens, and also leave loved ones behind to endure. He wrote: "Many in the ranks of the law enforcement and military professionals die protecting the freedoms of this nation; only their battlefields are different".

Recent tributes such as the Brooklyn Wall of Remembrance, the Pentagon 9/11 Memorial, the Horse Soldier Statue, and the American Veterans Disabled For Life Memorial (which our pal Gary Sinise will help unveil in 2013 at its site in Washington D.C.) help tell the stories of those "ordinary Americans" who have served us all. 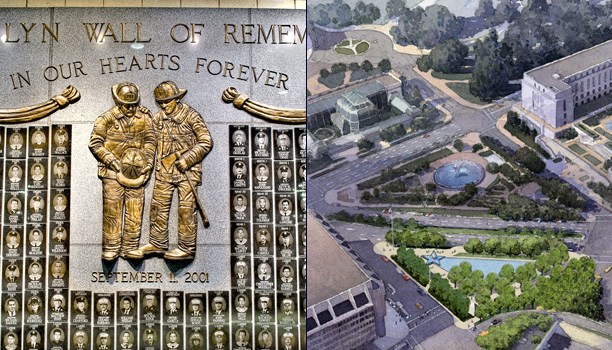 "Keeping future generations informed and educated about the price of, and sacrifice for, our freedom... and educating those future generations through these important tributes with national monuments and memorials (as well as honoring those brave defenders who make those sacrifices), is critical to our nation's security," Gary said to me. "Those who forget (or have no knowledge of) our history will certainly be doomed to repeat it," he added.

Which is why the Gary Sinise Foundation supports these projects as part of its overall mission to give back: to do what it can to keep veterans, first responders and military families strong.

"What is most important, indeed vital, is that youth of today see that we remember, that we are grateful, that service and sacrifice and courage are noble things," Medal of Honor recipient General Pat Brady once told me.

Memorials remind us of what is really important: living lives of significance. They also remind us that one person can make a difference, that if we, as "ordinary citizens", choose to take action: it can create a "ripple effect". Just like it did with the horse soldiers and the statue (which Vice President Biden dedicated on Veterans Day near ground zero).

Medal of Honor recipient Gary Beikirch, a Green Beret medic in Vietnam, explained it to me like this: "Memorials are witnesses to our country and its citizens that there is a way to live one's life that is not about getting all you can get... that is not about ‘me, me, me'... there is a way of living that values something else as greater than self."

Perhaps amongst our recent New Year's resolutions... we all might add one: not only to remember our fellow Americans... but also to individually do something to show that we value their service. You never know what kind of "ripple effect" it might create. 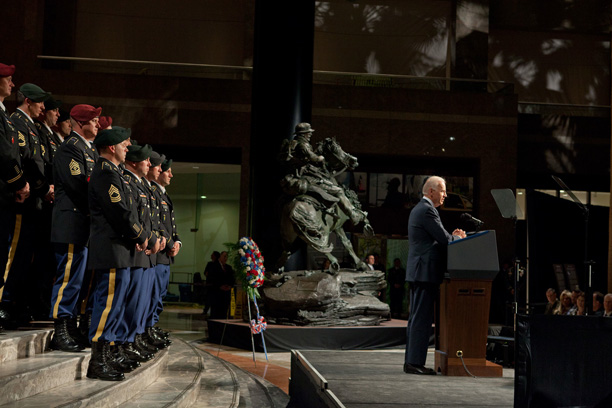 "...There's a proud tradition of Horse Soldiers in the United States military but none like these guys. The first cavalry in 4,000 years to ride into battle armed with the ability to call in airstrikes by using GPS units. You're probably the first soldiers who were covered by Chinooks and Blackhawks with --guns, as well. And the Night Stalkers who are the best pilots in the world.

It's the courage of Army Sergeant First Class Joe Jung, who is here, who is here today. In the first days of the mission, his horse slipped in the treacherous mountains. And by the way, these are God-awful mountains. These are not the Rockies with a whole lot of green on them. These are just outcroppings of rock as pointed as a razor in many places.

He fell. His horse fell. His horse fell on top of him and broke his back -- broke his back. So what did he do? He took two shots of morphine, remounted his horse and continued on because in his words, I wouldn't allow myself to be the weak link. It's not my nature, and it's not the nature of any Green Beret. Sounds like something out of a movie, but this is real. This happened. And it's happening today, tonight, right now -- right now.

Lieutenant Colonel Max Bowers had been carrying a fragment, as we mentioned here, of the World Trade Towers Center with him during the entire mission so he'd never forget. And when the Taliban fell, he buried -- as the General points out, he buried that fragment in Afghanistan, you all did. Now, under the tread of this soldier's boots -- this soldier's boots -- the artist has placed a piece of gravel from Afghanistan so that we won't forget, and we never will: You're all part and parcel of the greatest group of warriors the world has ever seen. ..."