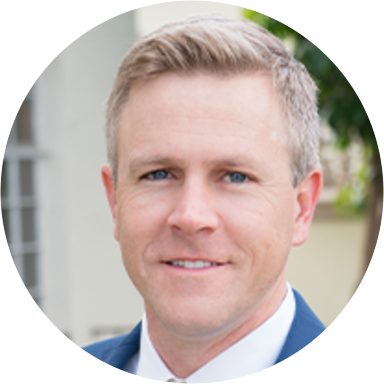 Robert F. Muth is a Professor of Law at the University of San Diego (USD) and teaches in the areas of veterans law and legal ethics. Muth serves as the Faculty Director of the award-winning legal clinics program at USD where he is responsible for academic oversight and strategic planning for USD’s 11 client-services legal clinics. Additionally, Muth is the founder and managing attorney of the USD Veterans Legal Clinic which provides pro bono legal services to low-income, indigent and homeless veterans and their families.

Muth previously served as a judge advocate in the United States Marine Corps. As a Marine Captain, Muth deployed for 13 months to Iraq in support of Operation Iraqi Freedom. Prior to receiving an honorable discharge in 2009, Muth received multiple awards for superior service and was also named the Defense Counsel of the Year for the Navy-Marine Corps Trial Judiciary, Western Judicial Circuit in 2008-09. While on active duty, Muth handled a wide variety of cases including those involving allegations of war crimes and breaches of national security.

Muth is admitted to the bar in California and Illinois and is a Department of Veterans Affairs accredited attorney. In addition to his military awards, Muth has been named an Evans Scholar and a Bartholomay Scholar and he is a past recipient of the Evans Scholars Foundation’s National Leader of the Year award. He has been honored by the Law Library Justice Foundation with its prestigious Bernard E. Witkin Award for Excellence in Legal Education and was named the 2017-18 San Diego County Veteran of the Year for his work serving the veterans community.

Muth received his B.A. from Northwestern University in 2002 and his J.D. from Duke University School of Law in 2005.