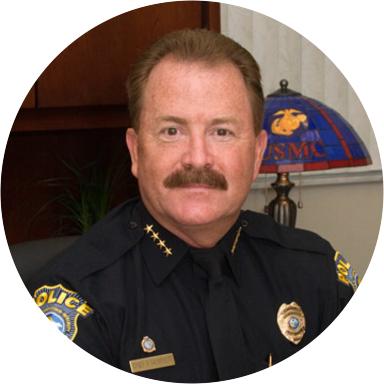 Pete Gauntlett recently retired as the Chief of Police and Public Safety Director for the City of St. Cloud, Florida. He served as The Public Safety Director in addition to being the Police Chief and oversaw all police; fire, emergency medical, emergency management, and 911 communications and code enforcement for the City of St Cloud He had been in this position since March of 2010. During his 12 years he was instrumental in the development of a “real time” crime center and intelligence lead policing initiatives, which resulted in the city being named one of the state of Florida’s safest cities.

He began his career in law enforcement with the Orlando Police Department in January of 1981. During his 28 years he served the City of Orlando with great distinction and honor. He served in numerous operational and investigative assignments including SWAT Commander, Orlando International Airport Commander, Staff Director, High Risk Incident Commander, Chief of Detectives and Chief of Patrol Operations. He has numerous degrees in criminal Justice and is a graduate of the 209th session of the FBI National Academy. Throughout his career at OPD, he was instrumental in developing their intelligence lead policing and community oriented police initiatives. Pete is the recipient of numerous community service awards for his leadership efforts in the City of Orlando.

Upon retiring from the City of Orlando as Deputy Police Chief, Pete became a consultant/advisor to the state of Florida Regional Domestic Security Task Force. His position was instrumental in the protection of critical infrastructure and public safety planning for the prevention of domestic and international terrorism. He was selected by the State of Florida as the representative to the National Joint Terrorism Task Force for Homeland Security and Infrastructure Protection.

Prior to his career in law enforcement, Pete was a proud member of the United States Marine Corp. He currently resides in Longwood Florida with his wife Margaret. They are the proud parents of their son Ben and his wife Kasja and elated to be new grandparents to Charlotte. He is an active member of St. Margaret Mary Catholic Church.